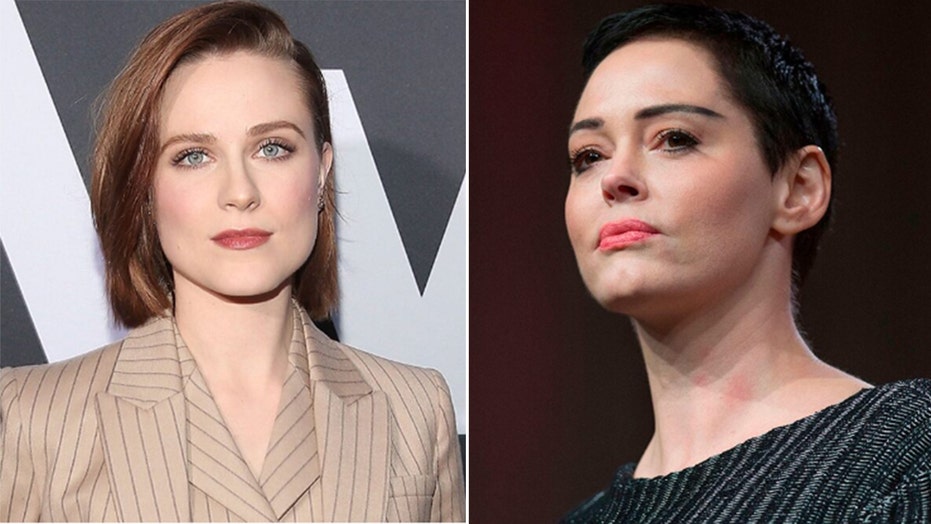 Wood, 32, on Friday directly responded to McGowan's latest tweet in which the former "Charmed" actress declared she is no longer a "proud Democrat" due to her affiliated party downplaying sexual assault allegations against Biden by Tara Reade, a former staffer from his days in the senate.

"I have to say this is...spot on," Wood tweeted in response to McGowan's lengthy post.

During a hearing for the Sexual Assault Survivors Bill, the "Westworld" star shared a five-minute statement in front of the House Judiciary Subcommittee on Crime, Terrorism, Homeland Security and Investigations consisting of harrowing details of her alleged assault that involved being "tied up and beaten."

The alleged assault resulted in Wood's years-long battles with PTSD, addiction and depression, she said.

In McGowan's message from earlier this week, the outspoken Me Too advocate and victim of convicted rapist and disgraced movie mogul Harvey Weinstein, said she was raised a Democrat.

The 46-year-old actress recounted a memory from her younger brother's Air Force Academy graduation where she wore a "Vote John Kerry" pin and defended herself in a few arguments with "big men who were mad" about her party affiliation.

"I thought democracy meant...I had a right to choose those who lined up with my value system," she continued. "But what if there's no one?"

Evan Rachel Wood has moved from Los Angeles to Nashville to raise her son. (Reuters)

McGowan publicly stood in support of Reade after a 1993 clip from "Larry King Live" resurfaced last week and appeared to include her mother alluding to "problems" her daughter faced while working for Biden.

And on Wednesday, comedian Sarah Silverman broke her silence on Reade's allegations, this time calling out Senator Kirsten Gillibrand (D-N.Y.) for voicing support for Biden after being one of the loudest voices calling for fellow Democratic senator Al Franken's resignation following accusations he jokingly groped a woman while she was asleep.

Biden broke his silence on the matter on Friday, unequivocally denying Reade's allegations by saying "the facts in this case do not exist."

“No, it is not true,” Biden said during an interview on MSNBC's "Morning Joe" in addition to releasing a written statement. “I’m saying unequivocally it never, never happened and it didn’t. It never happened.”