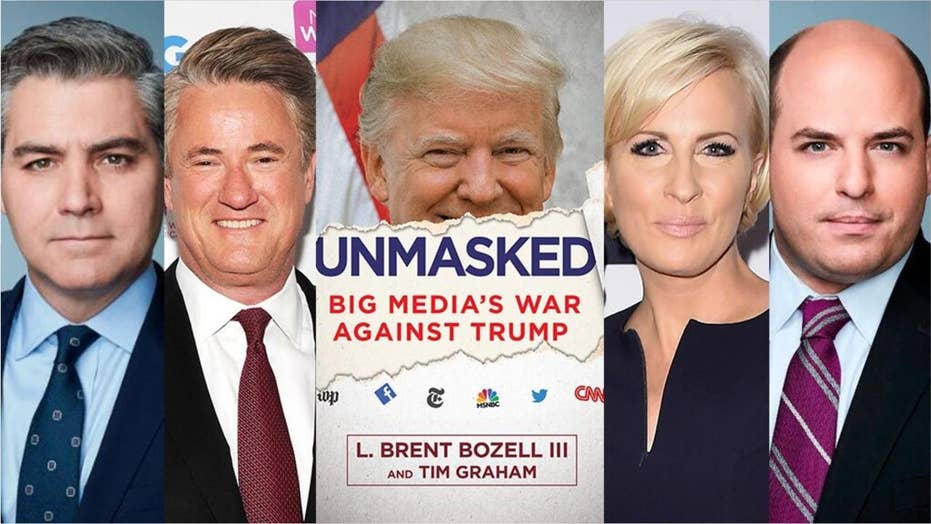 The new book 'Unmasked: Big Media's War Against Trump' ranks the members of the media who hate President Trump the most. Who has made the list?

A new book, “Unmasked -- Big Media's War Against Trump,” has named CNN chief White House correspondent Jim Acosta as member of the media who “hates” President Trump the most.

“Unmasked,” by L. Brent Bozell III and Tim Graham of the Media Research Center, hits stores on June 4 but Fox News obtained an advanced copy. The conservative authors include a subjective Top 10 list of “the biggest Trump bashers in the press” and CNN’s White House reporter takes the crown.

ACOSTA'S CNN ROLE FURTHER MUDDLED BY UPCOMING BOOK: 'YOU CAN’T TELL THE DIFFERENCE BETWEEN HIM AND A PAID PUNDIT'

“Jim Acosta is our winner. We suspect he would protest if he wasn’t,” Bozell and Graham wrote. “He would proudly wear the moniker of the face of the Resistance if it was bestowed on him by us, but we won’t do that. No man in the world of journalism has made a mockery of his profession quite like this man.”

Acosta was named the media’s biggest Trump hater before he admitted to “grandstanding” and “showboating” in an excerpt from his own forthcoming book.

But the “Unmasked” authors aren’t the only ones bothered by Acosta’s antics. One current CNN employee recently told Fox News that threats to the free press should obviously be taken seriously and reporters need to seek the truth and report it – but Acosta may no longer be right for the job.

Another current CNN staffer has come forward on the heels of Acosta claiming that “neutrality” doesn’t work when covering Trump.

“It’s disgraceful on two levels. First, [Acosta] insists on making himself the center of the story, the antithesis of good journalism. His ego knows no bounds,” the prominent CNN employee told Fox News. “Second, he actually admits he’s a pundit. He’d be a good one, articulate and persuasive guy, but [he should] stop pretending to be a reporter.”

“Today they are the perfect launch pad for MSNBC’s daily left-wing character assassination campaign against the President, smug in their hypocrisy,” Bozell and Graham wrote.

ABC’s George Stephanopoulos comes in at No. 3, while “every late-night talk show host” is tied for the fourth spot. The complete list includes a variety of media members who have criticized the president:

Bozell and Graham offer their rationale for each person who landed on the list, and it’s hardly flattering as the authors don’t exactly pull punches.

“In the course of passing judgement on what does and doesn’t constitute truth, [Brian] Stelter sounds like he’s about to wet his pants over Trump,” Bozell and Graham wrote before adding that “no observer outside of CNN with the IQ of a potato will take [Chris Cuomo] seriously."