Host of ‘Bizarre Foods’ Andrew Zimmern is under fire for his comments on mid-western Chinese food restaurants.

Talking candidly about his childhood and young adult life, Zimmern told Artful Living that his addiction to drinking and drugs had taken over his life, driving him to become homeless for a period of time in the 1990s.

As the 57-year-old recounts, around December 1990 he found himself evicted from his New York City apartment and with no one to call on for help.

Celebrity Chef Andrew Zimmern said he didn't shower for a year and slept on the floor in an abandoned house while battling addiction. (Getty)

He eventually found shelter in an abandoned building on Sullivan Street. “It was a townhouse that was in the midst of being renovated,” he described. “Work had stopped. Actually, demolition is more like it; renovation is a little too fancy a term. There were concrete casements in the windows. There was electricity that had been pirated from a nearby building across the roof with extension cords. And there was a sink with running water, so you could drink water. Thus began my year of homelessness.”

He goes on to further detail his living conditions, adding, “I didn’t shower for a year. Every night, I slept on a pile of dirty clothes on the floor that I called my bed.” 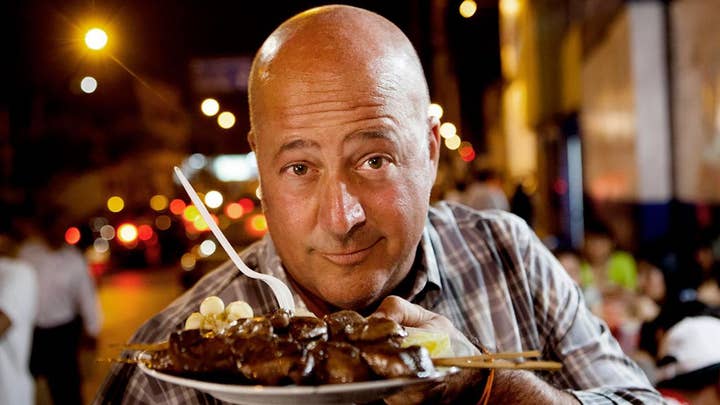 Zimmer says he didn’t quite sleep, more like passed out. And unfortunately, the building had a vermin problem. “Every couple of days, I would steal a bottle of Comet cleanser that I would pour in a circle around my sleeping area so rats and roaches wouldn’t crawl over me in the middle of the night.”

To earn money, Zimmern stole purses from fancy restaurants and sold the contents to drug dealers for cash.

He also once tried to drink himself to death with three cases of vodka.

“I couldn’t tell you whether it was three or five days later, but I woke up one morning and the tension, the Ace bandage that had been tied so tightly around my entire life just wasn’t there,” he recalled. “I felt a desperate need to reach out to someone.”

From there, Zimmern began putting the pieces of his life back together with the help of friends who had staged an intervention. By early 1992, Zimmern had entered Hazelden Betty Ford spending a total of five weeks there. He went to a halfway house and climbed the ladder.

Zimmern, who now executive produces the food show “The Zimmern List,” said a person at rock bottom has to find the courage to ask for help.

“What I tell people is that you have to find someone to talk to. You have to somehow summon the courage to ask for help,” he said. “You have to share that dark, painful thing that you never want to tell anyone. Because until you do, it will always have power over you.”