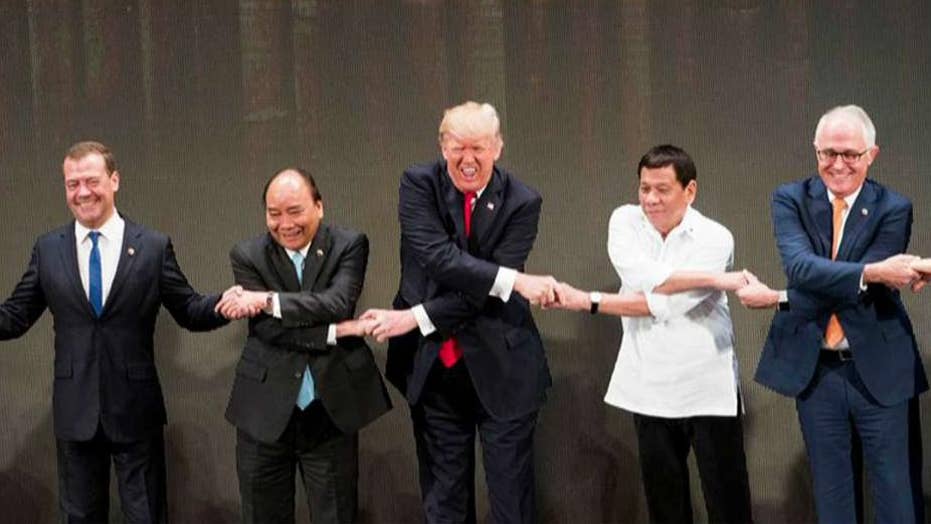 The most recent example of high-profile media bias against President Trump comes from New York Times’ top photographer Doug Mills, who apparently snapped an unflattering picture of the president as “revenge.”

Mills was upset when he wasn’t allowed to follow Trump inside the Asia Pacific Economic Cooperation forum meetings on Friday, which the White House press pool wasn’t invited to. Mills tweeted an image of a black box with the caption, “This what our APEC Summit photo coverage looks today… blank.”

Mills was apparently still unhappy with the president on Monday at the Association of Southeast Asian Nations summit and took out his frustration by tweeting an unflattering image of a grimacing President Trump that he snapped during the ASEAN leaders' annual “family photo.” The photo that quickly circulated online is an awkward image of Trump reaching across his body to shake the hands of other world leaders. Video shows that Trump quickly made the unflattering face before smiling and looking presidential for the remainder of the photo op.

The anti-Trump media predictably loved the unbecoming image, with CNN’s Chris Cillizza tweeting, “This should be banned,” and NBC’s Frank Thorp admiring the photographer, bragging, that Mills “does it again.”

The Washington Post noticed and published a story headlined, “News photographer who protested White House restrictions on access gets revenge with revealing shot of Trump.” The story noted, “Surely there were many other frames Mills could have chosen that made Trump look more distinguished.”

"Surely there were many other frames Mills could have chosen that made Trump look more distinguished."

“Yet Mills and other pool photographers published the awkward ones,” the Post’s David Nakamura wrote. “What Mills's photo does is make a strong case in answer of how this post began — the question of why the access of the independent press matters even on staged photo-ops or seemingly trivial events.”

Nakamura continued: “In ways both subtle and stark, Trump's awkward grimace reveals the messy reality of high-stakes geopolitics that an airbrushed official portrait of the ASEAN ‘family’ would gloss over.”

The Pulitzer Prize-winning Mills has worked as a photographer in the Washington bureau of The New York Times since 2002. He had previously worked at The Associated Press, where he won a variety of awards for coverage of Bill Clinton.

While only Mills appeared to take pleasure in the awkward image by tweeting it out, it should be noted that The Associated Press, Reuters and AFP published similar photos.