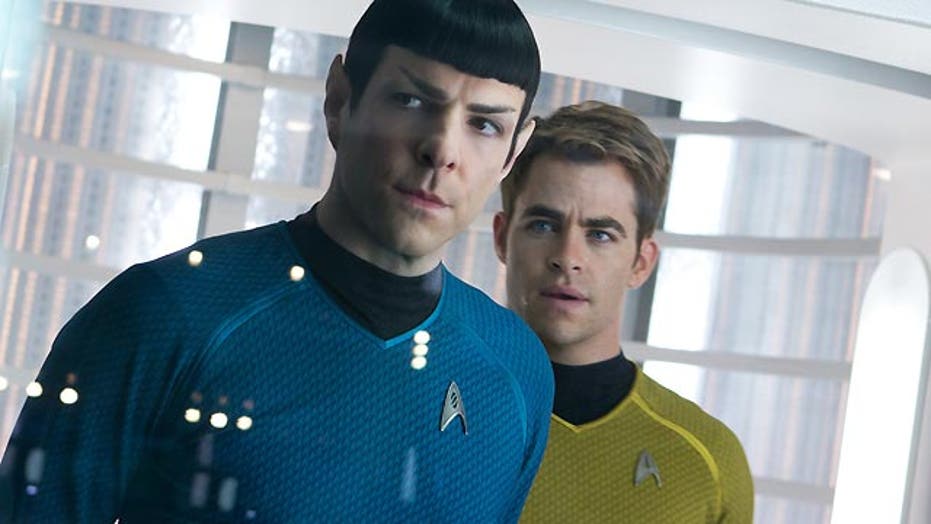 Ashley Dvorkin and Justin Craig beam aboard the Starship Enterprise to tell you why J.J. Abrams' 'Star Trek Into Darkness' is worth seeing

J.J. Abrams boldly returns to the Starship Enterprise in the first sequel to his 2009 reboot with “Star Trek Into Darkness,” and this time the director has completely outdone himself.

“Into Darkness” eclipses the first film in a rare occurrence of a sequel one upping its predecessor, though missing are those sensations of grandeur and stargazing as Kirk, Bones and Spock experience space and the Starfleet for the first time. Having all of that already established, Abrams instead fashions a hardboiled action-thriller, putting the film in full-throttle from the get go, grabbing the audience by the jugular and refusing to let go until the end credits roll.

“Into Darkness” is a warp-speed ride of intense suspense, lens flares, mystery and thrills, dipping in and out of “Star Trek” lore and ultimately creating a fresh new direction. That isn’t to say this film is without its sense of adventure and quick-witted humor. On the contrary, the film is very funny, gutsy in its action and never short of an eye-wink or two. Writers Roberto Orci and Alex Kurtzman are joined by “Lost” alum Damon Lindelof in creating a “Star Trek” story that is a gigantic nod to fans of the franchise while pushing old ideas into welcome new territory.

Fans of the original “Star Trek” series and films may enjoy the many references bandied about, though some changes may cause diehards to split hairs. This is Abrams’ “Star Trek” and the director lets you know it, which for the common movie-goer, isn’t a bad thing at all.

When Kirk adamantly breaks protocol by saving Spock’s life during an exploratory mission, he is reprimanded, costing him the Enterprise and his friendship with his Vulcan pal. Enter mysterious Starfleet rogue John Harrison, whose vendetta against Starfleet leads to a series of terrorist attacks with consequences that directly impact Kirk, the humbled, but caustic captain. Admiral Marcus (Peter Weller) sends the Enterprise crew on a mission to track down and kill Harrison, which unveils an even greater mystery than Kirk or Spock could have imagined.

Rising star Benedict Cumberbatch (BBC’s “Sherlock”) is perfectly cast as the enigmatic John Harrison. Cumberbatch gives a chilling, biting performance as the supremely intelligent and powerful villain, a wonderful contrast to the impetuous wild-child Kirk. The actor lets the timbre of his voice and his cold, icy stare do most of the work, which is eerily effective.

The returning crew members have comfortably settled into their roles. Chris Pine provides his Kirk with just the right amount of cockiness and remorse, making the character much more interesting this mission. Zachary Quinto, apart from Cumberbatch, delivers the juiciest performance in the film. Spock is given the star-treatment as his character continues with the struggle of allowing human emotions to get the better of his logical, Vulcan side. While Kirk is given a greater arc in this film, it’s Spock who becomes the most interesting character to follow.

Not surprising is the wonderful and comedic performance by Simon Pegg as Mr. Scott. Scotty is provided a more significant role this time and Pegg makes great use of his delivery any chance he gets. Karl Urban, Zoe Saldana, John Cho and Anton Yelchin are given less significant roles to play, but their camaraderie is still palpable. Joining the crew is Alice Eve (“Men In Black III”) as a weapons-specialist who becomes a humorous distraction for Bones and Kirk.

The special effects, Scott Chambliss’ production design and Michael Kaplan’s costumes are state of the art. “Into Darkness” features some of the best uses of models and CGI in a live action film in quite some time. The expansive sets are breathtaking, featuring elaborate interior shots of the Enterprise as well as a new phantom ship. We are introduced to some fascinating-looking new planets, which is refreshing to see since Hollywood has pretty much considered it taboo, apart from “Trek,” to create new fictitious worlds in their Sci-fi movies. The costumes are intricately designed but never overtly alien-looking, while still paying homage to the threads of the original TV series.

A significant contribution to the identity of Abrams’ “Star Trek” films is the music by Michael Giacchino. With “Into Darkness,” the composer deftly expands his themes into bold new directions, as well as composing a menacing new motif for Cumberbatch’s John Harrison. His score is both a consistent driving force of melodic energy and haunting pathos, pushing Kirk, Spock, Harrison and the crew of the Enterprise to the brink.

The summer blockbuster season has only just begun, but any of the upcoming releases will be hard-pressed to surpass the detail, excitement to sheer adventure of “Star Trek Into Darkness.”