John Rich performs 'Shut Up About Politics' on 'The Five'

Country star John Rich and 'The Five' co-host Greg Gutfeld co-wrote the new song; all proceeds from 'Shut Up About Politics' will be donated to Folds of Honor -- visit facebook.com/thefivefnc for details.

A hit song recorded by John Rich is resonating with America and helping military families in a unique way, the country music recording artist said.

Rich explained why the song "Shut Up About Politics" - recorded with a little help from the hosts of "The Five" - had soared to the top of the iTunes download charts, in an appearance "The One with Greg Gutfeld" podcast.

"I looked up and we were literally the number one most downloaded song on any genre of music," the country music star said.

Rich joked that host Greg Gutfeld, who received a co-writer credit for the song, penned something more popular than some ageless tunes.

The CMA Award nominee added country music is popular across the country because it speaks to listeners' personal thoughts.

"The thing about country music, and the reason it's so big, a lot of times in country you'll write songs that'll say what everybody is thinking." 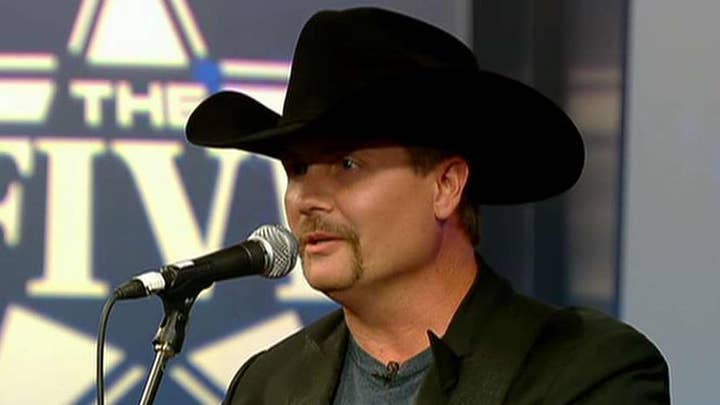 He added "Shut Up About Politics" was no different.

GUTFELD ON 'THE FIVE'S NEW SONG WITH JOHN RICH

"You and I were able to put into a little song how people feel about not being able to watch an award show or a game or a movie... without there constantly being some kind of political angle to it," Rich said. "You feel like screaming at them, 'please shut up about politics'."

He and Gutfeld also discussed how 100 percent of the song's proceeds go to Folds of Honor.

"Folds of Honor puts kids through college who lost a parent through combat," the singer said. "Our little song, Greg, is going to be having a serious impact in real people's lives in this country."

Gutfeld said the idea for the collaboration came from a suggestion by Dana Perino during a bus tour with his "The Five" co-hosts a few years ago.

"When we did the bus tour a couple years ago, I would be... writing these insane country songs about being on the bus, and she said, 'Boy, you should record one of these."

Listen to the full interview on the latest episode of "The One with Greg Gutfeld" here, and subscribe to the podcast on iTunes.