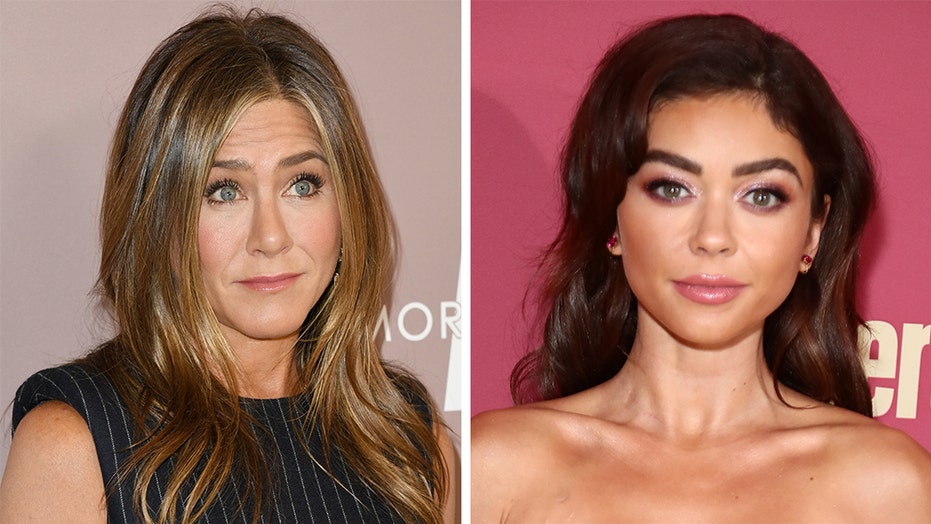 Who’s up for an early #ThrowbackThursday?

Sarah Hyland was game on Wednesday. That's when the “Modern Family” actress shared a super throwback image of herself with Jennifer Aniston and Paul Rudd from the trio’s 1998 film, “Object of My Affection.”

“In honor of @jenniferaniston getting an Instagram I’m reposting this picture from almost 24 years ago,” Hyland captioned the sweet photo. “Neither she, Paul Rudd, nor myself have aged since 1996. I love ya fake mama! ❤️ #objectofmyaffection.”

Hyland, 28, posted her tribute to Aniston, now 50, after the “Friends” alum joined the social media platform and proceeded to break the algorithm that allowed people to follow her account. It wasn’t long after Aniston shared her A-list-filled “friends” selfie with the world that many users began seeing the message “Sorry, this page isn’t available” when attempting to follow her profile.

An Instagram representative told Page Six, “We are aware that some people are having issues following Jen's page -- the volume of interest is incredible! We are actively working on a solution and hope to have the page up and running smoothly again shortly.”

Hyland wasn’t the only Aniston accomplice to honor the “Murder Mystery” actress on her social media christening. Aniston’s on-screen friends, Courteney Cox and David Schwimmer, also created posts designed to welcome the actress to the platform.

Cox, who played Monica Geller, took to her own Instagram to share a photo of her and Aniston hugging.

“Hi Jen!” she captioned the image. “Welcome to the social media world. … It sucks. You’re gonna love it!”

JENNIFER ANISTON BASHES MARVEL: I'M NOT INTERESTED IN 'LIVING IN A GREEN SCREEN'

While the line may sound like a jab at social media, it is actually a quote from the very first episode of “Friends” in which her character welcomes Aniston’s Rachel Green to the “real world.”

Schwimmer, who played Ross Geller, Cox's brother on the series, shared a photo of his own. It features what appears to be Lego versions of his and Aniston's characters at the famous, fictional Central Perk coffee shop that figured so prominently in the hugely popular sitcom.

Aniston also managed to break a Guinness World Record, reaching a million followers on the platform faster than anyone. She got it done in five hours and 16 minutes, according to People.

Accomplishing that feat placed her atop Prince Harry and Meghan Markle who held the title for all of six months when they opened their Instagram account on April.