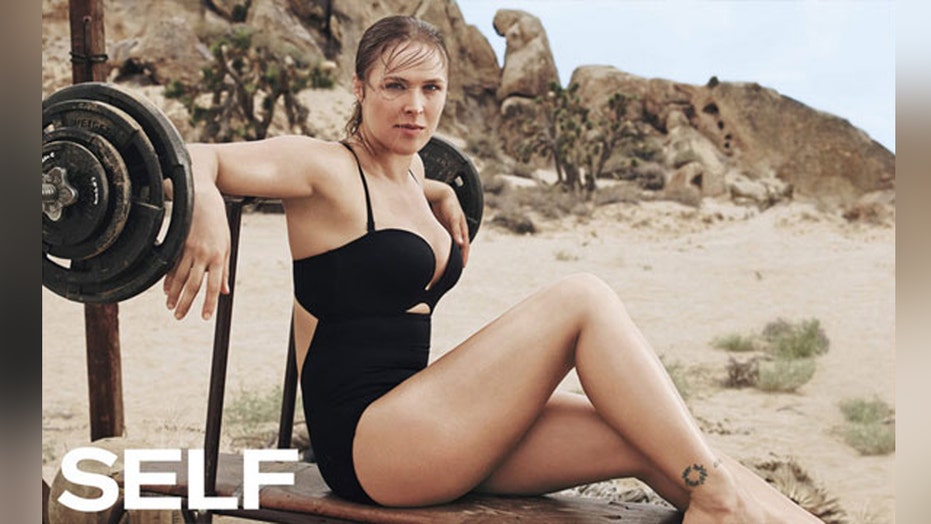 Four4Four: Do female stars have to wear bikinis to get noticed? Plus - crazy Jaden Smith quotes and even crazier celeb kid names

Ronda Rousey had plenty of people talking about her relationship status recently when she sported some notable new bling.

The 28-year-old UFC superstar was rocking a diamond ring on her left ring finger during promotion for her appearance on "Saturday Night Live" alongside Selena Gomez, causing speculation that Rousey could be engaged to fellow UFC fighter Travis Browne.

But Rousey's rep told ET on Monday that the rumors are false. Rather, Rousey was in rehearsal for "SNL" and trying jewelry on, the rep explained.

However, not everyone was overjoyed on the possible big news.

In an Instagram account believed to belong to Browne's estranged ex, fitness model Jenna Renee Webb, Webb slammed the couple and brought up her past allegations that Browne physically abused her. On Sunday, Webb reposted a picture from MMA podcast "Overtime" of Rousey with Gomez, circling the ring in question. The picture reads, "Is Ronda Rousey wearing a promise ring? As in 'I promise not to hit you like my current wife' ring?"

"Pet Peeve: When people think they can do stupid s--t and not get called out on it.... I'm pretty sure we're still married," Webb allegedly writes in the account that has over 90,000 followers. "When he hits you across your pretty face don't worry, I'll be right here to say #IToldYouSo I wish you both the best �� #yourewelcome #hyprocrite #thankyou #DNB."

Browne, 33, has denied he was ever physical towards his ex, and in August, a UFC commissioned third-party investigation by law firm Campbell & Williams determined there was "inconclusive evidence" regarding domestic violence allegations against the heavyweight fighter. There has never been a police investigation, and Browne has never been charged.

Rousey commented on the allegations in December.

"It's hard, it's really hard. I'm very anti-domestic violence," she told ESPN magazine. "But I know that he didn't do anything. Now I'm put in this situation where I'm finally happy with somebody that respects me and cares about me, and I'm like, 'What do I do?'"

WATCH: Ronda Rousey Reveals Her Plan for Winning the Role of 'Captain Marvel'

"Dating is for children. Dating is for kids," Browne said during an interview with MMA Hour when asked if the two were "dating." "Over the summer, through all the s--t that I had to shuffle through, that I had to sift through, Ronda and I started talking throughout the summer, and I'll say now that we are together. She's my woman and I'm her man. There’s no boyfriend, girlfriend stuff. There's no dating. We're together."

Last month, the two definitely weren't shy about showing some PDA -- sharing a big smooch after leaving the gym together.