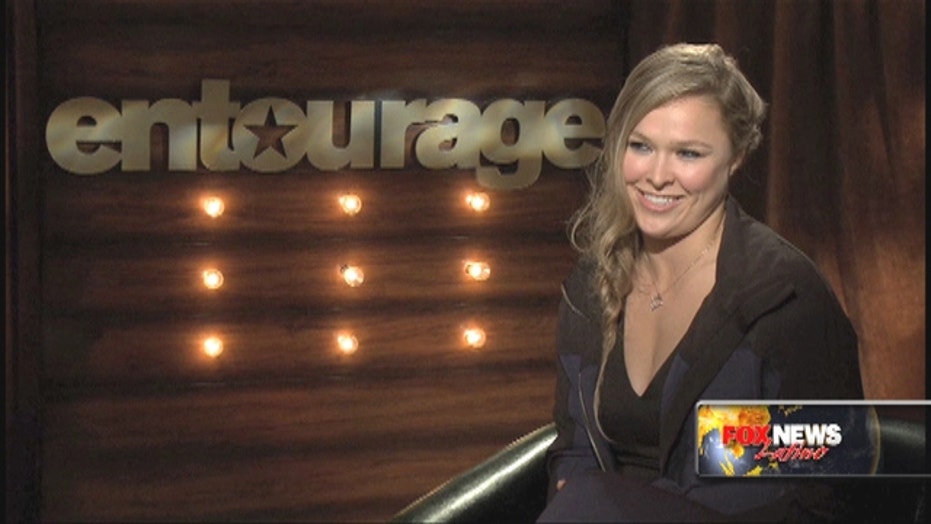 Ronda Rousey shows her girly side in 'Entourage'

Undefeated MMA fighter Ronda Rousey has been described as the toughest woman on the planet, a title she’s earned with years of hard work.

Rousey, 28, is taking her star power from the cage to the big screen one more time, making appearances in big Hollywood movies such as "The Expendables 3," "Fast & Furious 7" and now playing herself in the new “Entourage” movie: a challenge, she told Fox News Latino, that pales in comparison to what she faces in the ring.

"If you’re able to walk into an octagon in the middle of an arena with millions of people watching and the other person across from you has been waking up in the morning dreaming of beating you up for years, and you’re able to overcome situations like that, that really puts everything else into perspective," she told FNL.

In fact, the former Olympian and Judo champion said her biggest challenge on set was letting her guard down, literally.

"I have these habits that have been so engrained for years and years of practice,” she said.

“I’m constantly covering my face and the idea is that no one could punch back, but if you’re on film, people want to see your face.”

The famously single Rousey admits that she has a tough exterior, but she also has a soft side, one you get to see in “Entourage," where she plays herself.

"It was nice to kind of give a glimpse of how girly and self-conscious and everything else I could be, when people assume I’m just this callous, tough chick all the time.”

The toughest woman on the planet’s rise to fame wasn’t easy, and she documents it all - including the painful loss of her father and the intensity of her judo training - in her new memoir “My Fight/Your Fight” which hit stands two weeks ago.

”I included everything,” she says. “The events that were formative and the really challenging obstacles I had to deal with were all included, there was nothing really left out."

With this book, Rousey can now add author to her resume, but the fighter still has her eyes on the prize and hopes to retire from MMA undefeated.

Next up she’s fighting Bethe Correia in her home turf, Brazil.

"I think it’s going to be the only encounter because I don’t think she’s coming back from this one,” the California native told Fox News Latino.

In fact, Rousey is so confident she’ll win in the August 1st bout fight, she says she doesn’t think Correia will want to fight ever again.

After catching herself throwing some tough words for Correia, Rousey laughed saying,

“See what I mean? Will someone ask me on a date after that?”