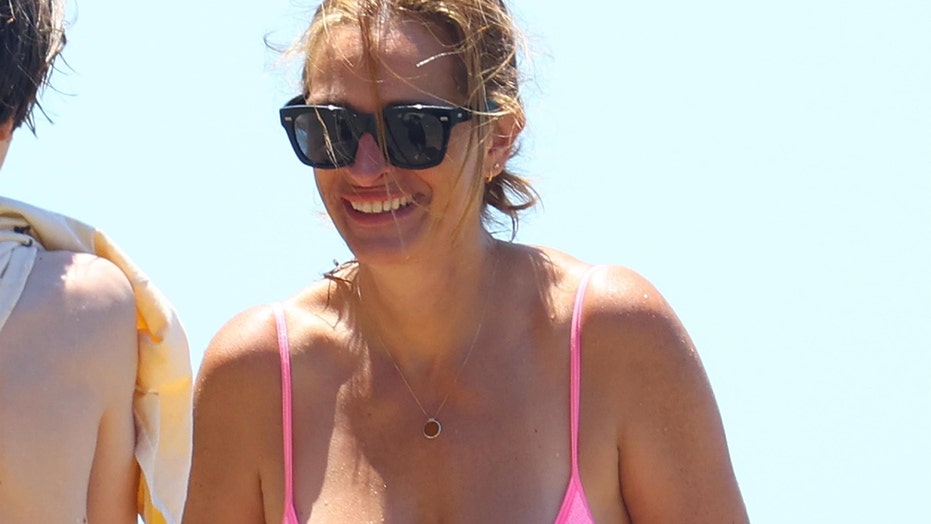 The "Pretty Woman" star is pretty in pink.

Julia Roberts delivered some holiday cheer as she made heads turn during a beach outing with the family in Sydney, Australia.

On Christmas, the 54-year-old rocked a bubblegum pink one-piece swimsuit that highlighted her long, lean legs and fit physique. She completed the look with a messy ponytail and a dainty gold necklace. The Oscar winner soaked up the sun with her husband Danny Moder, who proudly went shirtless, displaying his flat abs.

Julia Roberts hit the waves on Christmas with her family in Sydney, Australia. As the Oscar winner soaked up the sun, her husband and kids went surfing.  (KHAP / BACKGRID)

At one point, the pair enjoyed a sweet sandy stroll along the beach with matching sunglasses and trucker hats. Later, Roberts embraced her beau and gently kissed his neck as they enjoyed their lush getaway. Their three children, twins Phinneaus and Hazel, 17, and Henry, 14, were close by and later enjoyed some surfing with their father.

However, it’s not all play for Roberts. According to multiple reports, the actress has been in Australia for the past few months for work. She’s currently shooting her next rom-com, "Ticket to Paradise," which will also star her longtime pal George Clooney.

But family time is essential for Roberts. Just one month ago, the notoriously private star took to Instagram and posted a throwback photo of her twins to commemorate their 17th birthday. In the pic, Roberts is seen snuggling up with her children as newborns.

"17 of the Sweetest years of life," she captioned the adorable snap.

In July, Roberts gave fans a rare glimpse of her continuing romance with Moder, 52. She shared a heartfelt selfie on Instagram as the pair celebrated their 19th wedding anniversary.

"19 years. Just getting started!" Roberts wrote in the caption of the post in which she donned an orange bird-logo cap pulled low over her signature blonde locks, a floral-print blouse and oversized shades.

In 2018, Roberts raved about the love she shares with the cinematographer to Extra! and called him an "awesome human being" while adding that the pair "have so much fun."

"If we go to work together and go home together – all that work time – when you come home and [say], 'Oh, honey, how was your day?' We did all that in the day and in the car," she explained of their working relationship while on their 2015 movie "The Secret in Their Eyes."

"So when we got home we got to put that all away, which was really delightful," she shared.