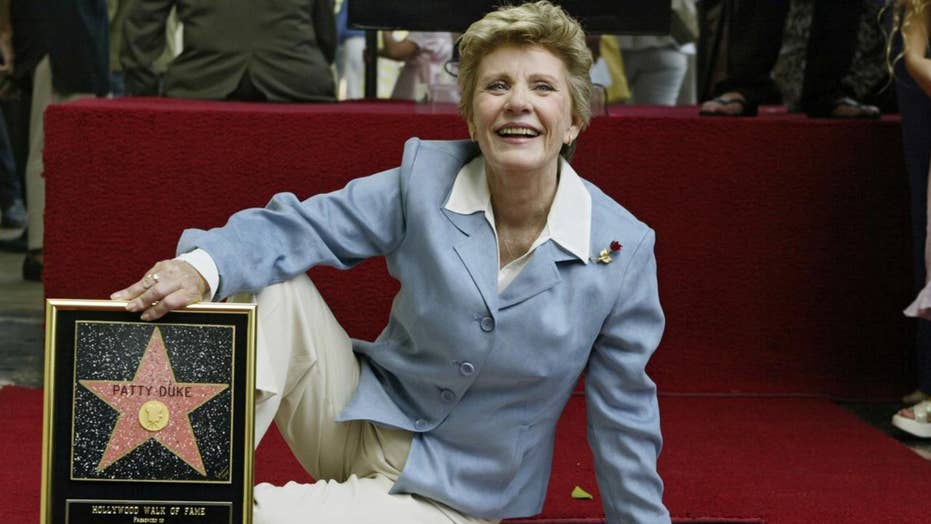 Former child star and Oscar-winning actress Patty Duke shares stories about her time in Hollywood before passing away in 2016 in a new memoir, published posthumously by friend and co-author William J. Jankowski, titled 'In the Presence of Greatness.'

Former child star and Oscar-winning actress Patty Duke had some stories to share about her time in Hollywood before she died in 2016 at age 69 — and her friend is making sure they are getting out to the world.

Duke, whose real name was Anna Marie Duke, co-authored a memoir titled “In the Presence of Greatness” alongside her friend William J. Jankowski, which was recently published.

Jankowski, who befriended the actress in her later years, told Fox News her estate approved the book and her sons are aware of it.

Jankowski said the idea for the memoir first occurred to him in late 2013, years before she succumbed to sepsis from a ruptured intestine.

“She always told me these fascinating tales about Hollywood,” he said. “I had been wanting for a very long time to write a book together about these stories she would tell me for so long, but I was afraid to ask.

"I approached her one day and said, ‘… You’re one of the few people who could say you’ve met Helen Keller and President Kennedy… One day when you go, those stories will go with you. So I think we should write them down to preserve your story and your memories.' She really liked that approach and she trusted me as a friend.”

By 2014, the pair began working on what would be Duke’s final book. Jankowski said he would record their conversations while he showed her photos and video clips from her star-studded past.

And while Duke happily spilled secrets about life in Hollywood, the biggest challenge she faced was reminiscing about her beloved friend, actress Sharon Tate.

Tate, an actress and model who was expecting her first child with filmmaker Roman Polanski, was stabbed to death in 1969 by members of the Manson family in her Los Angeles home.

Duke and Tate became friends while filming 1967’s “Valley of the Dolls.” Curbed Los Angeles previously reported Duke rented her five-bedroom house to Tate and Polanski, one that the couple wanted to buy. Instead, the pair moved to the doomed Cielo Drive property.

“It was the most difficult chapter for her to do. It really was,” said Jankowski. “… She was very, very nervous. She hadn’t really talked too much about Sharon Tate.

Patty Duke wanted to remember Sharon Tate as a beloved friend, not a murder victim. (Courtesy of the author.)

“She was very emotional talking about it. We had to stop taping once or twice… They shared a housekeeper who ultimately found the bodies and reported it to police. It haunted her for a long time. Probably for the rest of her life.”

Jankowski claimed Duke and Tate were supposed to have dinner on the same evening the murder occurred. But fate got in the way.

“She knew Sharon was very pregnant at the time, over eight months pregnant,” he explained. “[Duke] had a case of strep throat. She did not want to get Sharon or the unborn baby sick of strep throat. So she declined the invitation.

"She wrote in the book of something along the lines of you could fill an entire stadium of all the people who claimed to be there that night. But that’s how it happened for her.”

Patty Duke with William J. Jankowski. (Courtesy of the author.)

Jankowski was surprised Duke was willing to revisit one of the most painful memories of her past, but he said the actress wanted to share a new side to her friend, one that was seemingly overlooked over the years since the tragedy occurred.

“As Anna wrote in the book, Sharon felt she was going to make her mark as a mother and that was by far the most important thing,” said Jankowski. “According to Anna, nothing else mattered. It was all about the baby.

"She said there were rumors at the time that Sharon wasn’t taking care of herself and was doing drugs or drinking. But she said, ‘No. The woman I saw was greatly devoted to having that child and she took wonderful care of herself during that pregnancy.'”

Another star Duke wanted to address in her book was Lucille Ball and the alleged tumultuous relationship they shared that was exploited by the tabloids.

Country Living magazine reported that at age 23, Duke began dating Ball’s only son, Desi Arnaz Jr., who was 17 at the time.

Ball was reportedly furious by the high-profile romance. The fling ended after several months and Duke allegedly had an affair with married actor John Astin, who played Gomez on the hit TV show “The Addams Family.” Then Duke suddenly eloped with rock promoter Michael Tell. The marriage lasted for 13 days.

Duke gave birth to son Sean in 1971 and married Astin in 1972 after his divorce was finalized. People Magazine reported that when Sean was 14, Duke confessed that Arnaz was his biological father.

But in 2001, Sean told the magazine that he underwent a DNA test and discovered Tell was his biological father. His mother didn’t initially accept the paternity result.

Still, fans have always wondered if Duke was able to patch things up with Ball before her death in 1989 at age 77.

“The tabloids pitted her and Lucy against each other,” said Jankowski. “… And then Anna got pregnant and Lucy didn’t want to see the baby because she didn’t think it was Desi’s. She never talked too much about that with me. Very little snippets, until we started talking about the book.

"But another emotional chapter was when she talked about Lucy. She broke down in tears talking about Lucy. She loved that woman… Anna said that at the time, nobody really knew what was real, at least back in the ‘70s.”

According to Duke, the two actresses saw each other at a soiree in the early ‘80s – and things would forever be different for them.

“Without saying a word, Lucy put her hand over her hand,” Jankowski claimed. “Anna said, ‘Whatever drama there was between us was gone now.’ Anna felt Lucy did love her. And she loved Lucy… She was so relieved that there was a resolution before Lucy died.”

And as for the DNA results, Jankowski insisted Duke ultimately lived with it.

“In this book, for the first time, Anna said she had to finally buy those DNA results… She believed Desi was the father… And John Astin raised Sean as his own… She didn’t really ever remember consummating that relationship [with Michael Tell]. So she initially didn’t buy those results.”

Duke spent the last 25 years of her life in Coeur d’Alene, Idaho with her husband, Michael Pearce. Jankowski shared that while she enjoyed living at a slower pace, she reportedly wondered if residing far away from Hollywood made her miss out on acting opportunities.

Patty Duke with William J. Jankowski. (Courtesy of the author.)

“She did a lot of local theater. So when the offers weren’t coming, she would do a lot of theater in the Spokane area, which is near where she lived… She would also volunteer her time at community theaters. She didn’t care she wasn’t being paid for it. She just had that thirst for acting. That never ever went away… She felt good at home relaxing for a little time. But then she wanted to be up and at it again.”