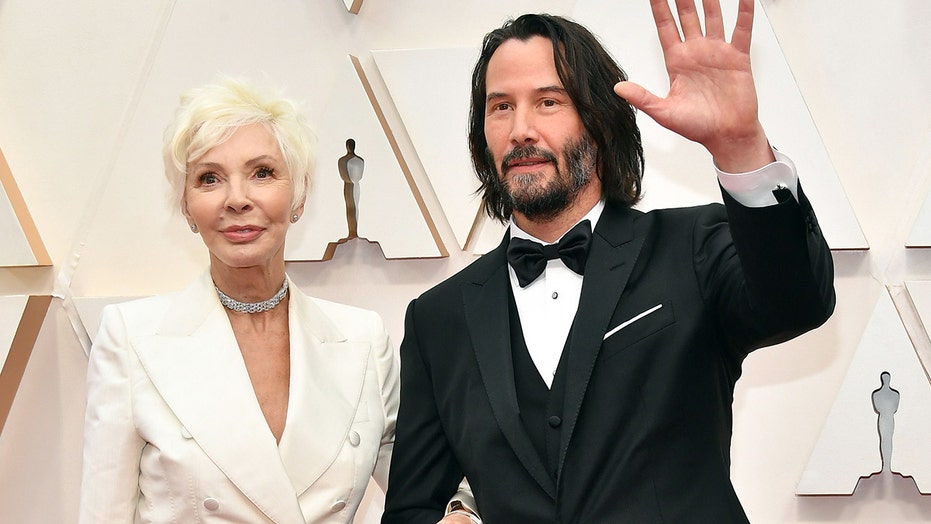 The 2020 Oscars red carpet was as glitzy and fabulous as one would come to expect the affair to be on film’s biggest night -- and for one of Hollywood’s most revered performers, staying down-to-earth was the best way to enter the Academy Awards.

Reeves lent his voice to “Toy Story 4” as one of the series’ new dynamic characters Duke Kaboom and the film itself garnered its own Oscar nomination in the best animated feature category.

Reeves had a busy 2019 and has already started filming “The Matrix 4,” in which he told E! News on the red carpet during the pre-show that there was “nothing” he could disclose about the forthcoming installment of the franchise.

Meanwhile, Taylor told Ryan Seacrest that she “only [knows] about “Matrix 1, 2, and 3,” seemingly revealing that even her own son hadn’t spilled the beans about the project to his mother.

Though many fans expected Reeves, 55, to walk the carpet with his reported girlfriend, artist Alexandra Grant, 47, whom he started appearing publicly with in the last year. They were photographed holding hands in November at the LACMA Art + Film Gala and an insider told People at the time that he and Grant were going strong.

“Keanu wants to openly share his life with her,” a source told the outlet in November of the "John Wick" star. "He is extremely happy and grateful to have Alex in his life.”

The insider said Reeves and Grant "started dating earlier this year, but have wanted to keep it quiet."

Actress Jennifer Tilly, who is close pals with Grant told Page Six on Thursday that the pair had been dating “for years.”

When asked if she thinks the “Speed” star and Grant will see wedding bells one day, Tilly simply said the pair are in a class of their own, adding that they’ll likely do what pleases them.

“I don’t know that doesn’t seem very hip and bohemian, does it? They’re artists. They’re just going to do what they do," she said.