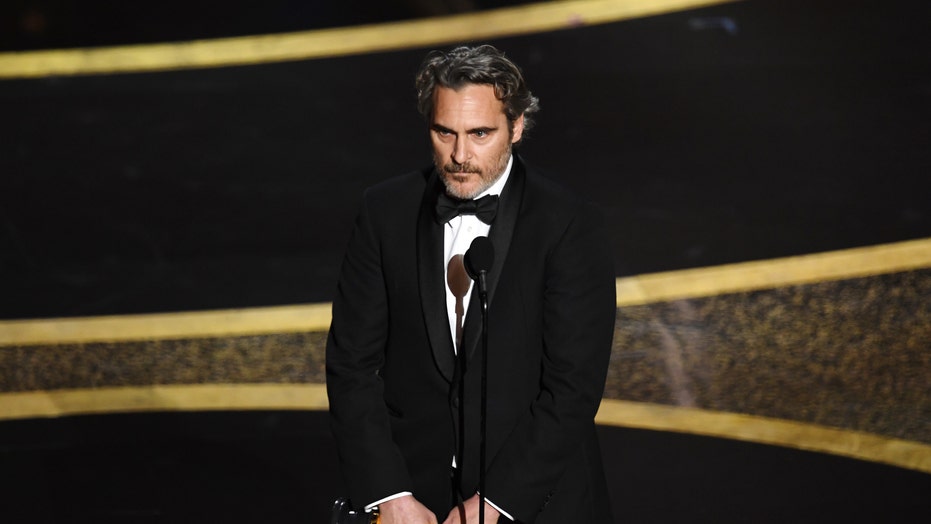 Joaquin Phoenix gave a lengthy speech about the state of the world while accepting his Oscar for best actor at the 92nd annual Academy Awards.

Phoenix took home one of the biggest awards of the night for his role as Arthur Fleck in “Joker.” The moment marked his first Oscar win after being nominated four other times for roles like "Gladiator" and "Walk the Line." An emotional Phoenix took the stage to note that he didn’t believe he deserves the award over his fellow nominees before launching into a lengthy rant about the state of humanity.

“I’ve been thinking a lot about some of the distressing issues that we are facing collectively and I think, at times we feel, or were made to feel, that we champion different causes,” Phoenix began. “But for me, I see commonality. I think whether we’re talking about gender inequality or racism or queer rights or indigenous rights or animal rights, we’re talking about the fight against injustice.”

Phoenix continued: “I think that we’ve become very disconnected from the natural world and many of us, what we’re guilty of is an egocentric world view. A belief that we are the center of the universe.”

The star continued by noting the way in which human beings' tendency to be egocentric allows them to justify things like stripping animals like cows for their babies, milk, meat and more.

Joaquin Phoenix gave a powerful and emotional speech about the state of humanity while accepting his Oscar for best actor in a leading role at the 92nd annual Academy Awards. (Kevin Winter/Getty Images)

“I think we fear the idea of personal change because we think that we have to sacrifice something to give something up, but human beings at our best are so inventive and creative and genius that I think when we use love and compassion as our guiding principles we can create develop and implement systems of change that are useful to all Homosapien and the environment,” Phoenix said.

The 45-year-old actor got more emotional as he noted that he hasn’t always practiced what he was now preaching on the 2020 Oscars stage.

“I've been a scoundrel all my life. I've been selfish I've been cruel at times, hard to work with, and I'm grateful that so many in this room have given me a second chance,” he said while seemingly holding back tears. “I think that's when we're at our best. When we support each other. When we help each other to grow, when we guide each other toward redemption, that is the best of humanity.”

The star concluded his speech by getting choked up reading a quote from his late brother, River Phoenix.

“When he was 17, my brother wrote this lyric, he said: ‘Run to the rescue with love and peace will follow.’ Thank you."

Phoenix had been seen as the front-runner for the award heading into Sunday’s ceremony. “Joker” won the best original score Oscar as well, and is up for the night’s final prize, best picture.