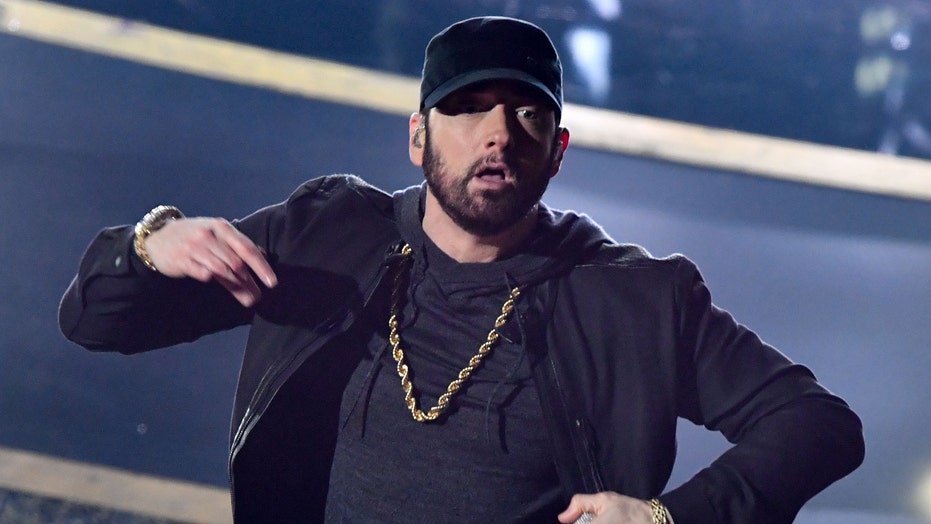 Janelle Monae and Billy Porter open the 2020 Oscars with a performance that brought the star-studded audience to their feet.

The Oscars are no stranger to surprises, but usually, it's not musical guests who are surprising viewers.

This year, however, the Academy shocked both the star-studded audience and viewers at home with a performance from Eminem.

The rapper performed "Lose Yourself" from the film "8 Mile," which won the award for best original song in 2003.

Eminem, 47, tweeted about the performance, referencing the fact that he was not present when he won the award.

"Look, if you had another shot, another opportunity... Thanks for having me@TheAcademy," he wrote. "Sorry it took me 18 years to get here."

The tweet was accompanied by a video of Barbra Streisand announcing that the rapper's song had won.

Viewers took to Twitter to express their surprise within minutes of his appearance, which earned him a standing ovation.

Eminem performs onstage during the 92nd Oscars at the Dolby Theatre in Hollywood, California on February 9, 2020.  (MARK RALSTON/AFP via Getty Images)

"Whaaaaaaaat #Eminem! Totally didn’t expect that!!!" wrote another. "The #Oscars actually managed to surprise me..."

"WHOA I did NOT expect to EVER see Eminem make an appearance at the Oscars..." wrote one person. "Neither did the audience!!"

One user "got goosebumps" after seeing "the best musical moment at" the Oscars.

Others took to Twitter to express their disappointment with Eminem receiving a standing ovation while Elton John, who performed later in the evening, did not.

"A standing ovation for Eminem but none for Elton f-----g John? THIS is an outrage. #Oscars," said one person.

"So the audience stands for Eminem but not Elton John?" asked another Twitter user, adding: "(Spoiler, both deserved it) #Oscars2020."

Said another person: "We live in a word [sic] where eminem got a standing ovation and elton john didnt. This doesn't sit with my spirit."