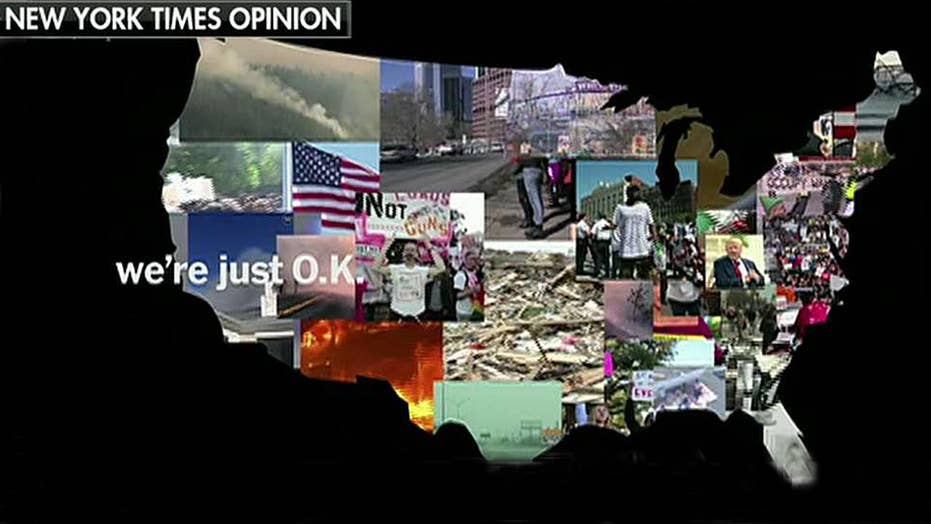 Ahead of Independence Day, a new video from The New York Times argues that America used to be great but is now 'just OK.' Peter Lumaj, an attorney who fled communist Albania to the U.S., explains why The Times is wrong.

The New York Times opinion team got an early start on celebrating Independence Day, declaring Monday that America is “just OK” with a slickly produced video that argues the United States is only great if you’re wealthy and privileged.

“We argue that the myth of America as the greatest nation on earth is at best outdated and at worst, wildly inaccurate,” Times producers Taige Jensen and Nayeema Raza wrote when describing the video.

The nearly five-minute video mocks pop culture items such as cartoons, movies and even mattress commercials for pushing the “narrative” that America is the greatest country on earth before playing devil’s advocate.

“We argue that the myth of America as the greatest nation on earth is at best outdated and at worst, wildly inaccurate."

“Now, hold on patriots, I know what you’re thinking, ‘America has done some pretty great stuff,” a narrator says before using the Organization for Economic Co-operation and Development as a litmus test.

“Which is basically a gold club of 36 countries, predominantly wealthy, Western and Democratic. And, unlike most golf clubs, this one has got some diversity,” the narrator said. “America is the richest country in this club, but we’re also the poorest with a whopping 18 percent poverty rate, closer to Mexico than Western Europe.”

The video then pivots from animated cartoon to a black screen with white font stating: “12.8 million American children live in poverty.”

The clip, posted under the Times' opinion banner, then lists a series of statistics that paint America in a negative light, such as poor rankings for high school science and math levels, costs of health care, lifespan, adult obesity rates, and infant mortality rates.

“But we have freedom in America,” the narrator sarcastically says. “Turns out, a lot of countries have freedom.”

The video points out that while Americans “boast” about freedoms, only 56 percent of them vote while closer to 80 percent vote in other nations.

“It’s getting worse, this year America slid on global rankings of corruption and freedom,” the narrator says. The video then lists areas where America succeeds, downplaying the economy and military in the process.

“So what, besides our economy and military are we actually No. 1 at? Turns out, a lot of things,” the narrator says, listing civilian gun ownership, mass shooting, TV watching, prescription drug abuse, prison population and “almost No. 1” in environmental damage.

The video then compares America to countries “like Pakistan or Nigeria where the rich don’t worry about the sad state of electricity or police,” pointing out that Kim Kardashian once rented private firefighters to protect her home from a devastating wildfire.

“When health, education, and safety are increasingly privatized or driven by privilege, the truth is ‘how great America is really depends on how rich you are,’” the narrator says. “Now, I’m not saying we’re Pakistan or Nigeria or any number of what we like to call developing countries, but we’re not perched as high above them as we like to think.”

The video says Americans have “long ignored the cracks in our system” and while it may “once have been the greatest,” that no longer applies.