'Real Housewives of Orange County' star Kelly Dodd revealed in a tweet Monday that she once dated beleaguered attorney Michael Avenatti, dumping him the day before Valentine's Day. When asked how long they were dating, Dodd replied, '4 months... broke up with him last year the day before Valentine's.' On Monday, federal prosecutors accused Avenatti of trying to extort Nike for up to $25 million.

"Real Housewives of Orange County" star Kelly Dodd revealed she dated Avenatti last year — and dumped him right before the most romantic day of the year.

“I can’t believe I dated @MichaelAvenatti… I dodged a bullet on that one,” Dodd tweeted Monday.

When a fan asked how long they were together, Dodd, 43, replied, “4 months… broke up with him last year the day before Valentine’s.”

MICHAEL AVENATTI CLAIMS TO HAVE SEX TAPE OF R. KELLY WITH 14-YEAR-OLD GIRL

She posted a photo with her now-ex to drive the point home.

On Monday, federal prosecutors accused Avenatti, 48, of trying to extort Nike for up to $25 million.

After his arrest, Avenatti told press, "As all of you know, for the entirety of my career, I have fought against the powerful; powerful people and powerful corporations. I will never stop fighting that good fight. I am highly confident that when all of the evidence is laid bare in connection with these cases, when it is all known, when due process occurs, that I will be fully exonerated and justice will be done."

Mark Geragos, an attorney and now-former CNN personality who's repped celebrities including Chris Brown and Jussie Smollett, was reportedly listed as an alleged co-conspirator in the case. 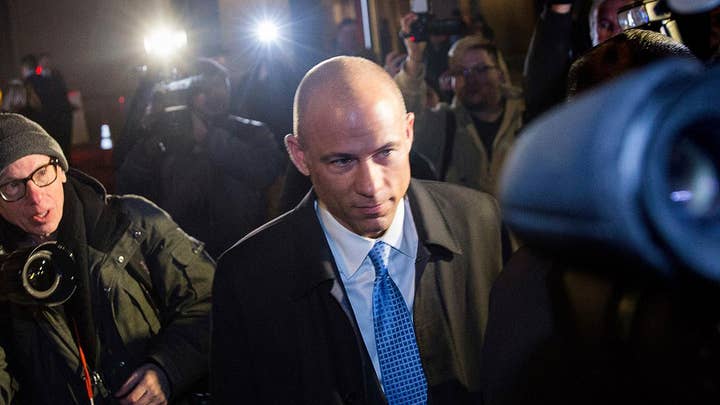 At a separate news conference in California, federal investigators accused Avenatti of embezzling a client's settlement money to pay his own expenses and debts — as well as those of his coffee business and law firm.

Fox News' Lucia I. Suarez Sang and Samuel Chamberlain contributed to this report.