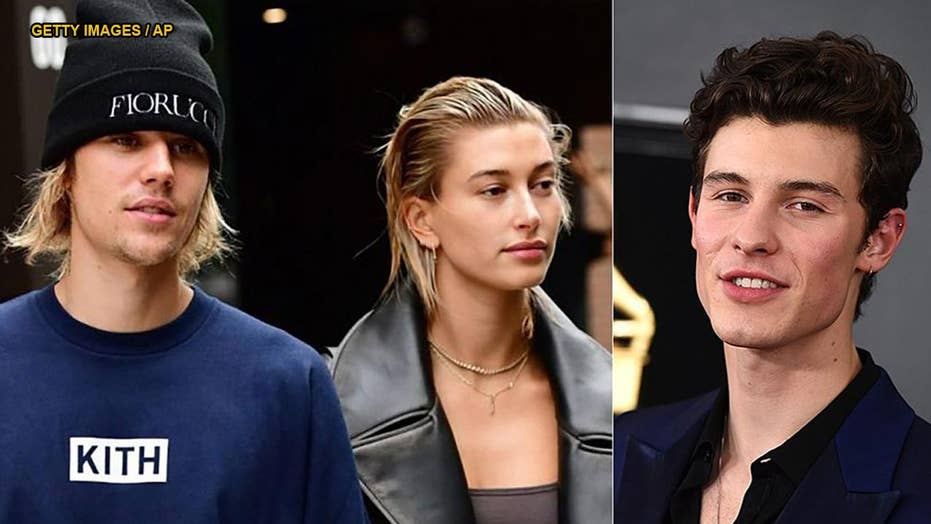 Justin Bieber took to social media, addressing fans after they reportedly called out singer Shawn Mendes for 'liking' one of Bieber's posts, a photo of wife Hailey Baldwin. Bieber told fans to 'relax' saying Mendes and Baldwin are just friends. Mendes and Baldwin faced dating rumors in the past, especially after they were spotted holding hands while walking the red carpet together at the Met Gala last year.

Justin Bieber left a lengthy clap back to an Instagram troll that both insulted his wife, Hailey Baldwin, as well as his on-again-off-again ex-girlfriend, Selena Gomez.

The 25-year-old “Boyfriend” singer posted a photo of Baldwin laying in bed, which prompted the celebrity’s usual storm of comments and likes. However, one person running an account that appears dedicated to slamming the couple, caught Bieber’s attention and spawned a lengthy retort.

“You are NOT in love with Hailey! You only married her to get back at SG plus Hailey sleeps with men like @shawnmendes for fame and she’s racist,” the hateful commenter wrote.

Bieber took to the comments of his own post to hit back.

"Ur immature the fact that you have an account dedicated to dissing my wife and I is absolutely absurd why would I dedicate my whole life to someone in marriage to get back [at] my ex," Justin wrote. "Anyone who believes this is mean spirited or 10 years old or younger because a logical person doesn't talk or think this way u should be ashamed of yourself really."

He continued, bringing up Gomez, who the writer referenced as “SG.”

“I absolutely loved and love Selena she will always hold a place in my heart, but I am head over heals [sic] In love with my wife and she is absolutely the BEST THING that has ever happened to me period.”

Bieber continued: "The fact that you want to spend your day dedicating yourself to hate says a lot about you, and if this was some sick ploy to get my attention U... are wrong on so many levels. I've seen multiple people say things like this and will never respond again to a message like this because I don't like to even give it my energy."

The star finally concluded by standing by his wife and declaring a policy to only welcome positivity.

"Hailey is my Bride period if you don't like that or support me your [sic] not a fan nor a good person, if you were raised right your parents would have said if you don't have something nice to say don't say anything."

Bieber tied the knot with Baldwin in September at a private courthouse ceremony. He previously dated Gomez for many years.

Baldwin, meanwhile, recently opened up to Cosmopolitan that she does not engage in the comments section of her social media for this exact reason.

"People can just be mean, and I feel like if you don't want it to get to you, then don't read it and allow it to affect your soul. You still care to a certain extent. You really have to train your brain to be like, 'OK, why do I even care?'" she said. "I don't know these people, they don't know me, they're not a part of my life or relationship."