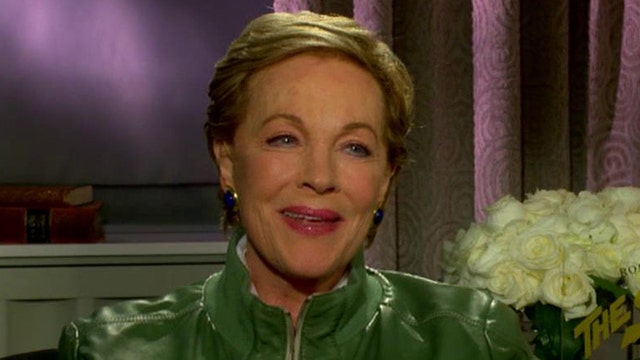 Julie Andrews reflects on success of 'The Sound of Music'

Julie Andrews admitted she sunk into a devastating depression when she lost her celebrated singing voice after an operation in 1997.

“When I woke up from an operation to remove a cyst on my vocal cord, my singing voice was gone,” the 84-year-old told AARP The Magazine for its October/November 2019 issue, as reported by the Daily Mail on Wednesday.

“I went into a depression,” continued the “Sound of Music” icon. “It felt like I’d lost my identity.”

In this Sept. 29, 2015 file photo, actress Julie Andrews arrives at the Los Angeles Philharmonic 2015/2016 season-opening gala at Walt Disney Concert Hall in Los Angeles. The American Film Institute is honoring Andrews with a Life Achievement Award. The organization said Friday, Sept. 20, 2019, that Andrews will receive the award at the Gala Tribute on April 25, 2020, in Los Angeles. (Photo by Richard Shotwell/Invision/AP)

Andrews said she first noticed that her voice was unusually hoarse during a Broadway show that year. The British star then had surgery to remove what she initially believed were “non-cancerous nodules” from her throat at New York City’s Mount Sinai Hospital.

But after the surgery, the British star had permanent damage that destroyed her four-octave soprano singing voice. According to the outlet, Andrews filed a malpractice suit against the doctors at Mount Sinai Hospital in 1999. The lawsuit was settled in September 2000 for an undisclosed amount.

It turned out Andrews was suffering from “a certain kind of muscular striation [that] happens on the vocal cords” after she strained her voice. The outlet shared that Andrews has since attempted several operations to repair her voice but wasn’t successful.

Julie Andrews, left, clutches Anne Hathaway's hand at an after following the premiere of "The Princess Diaries" at El Capitan Theatre on July 29, 2001, in Hollywood, Calif. (Getty)

Andrews credited writing with helping her cope with her health woes.

“By good fortune, that’s when my daughter Emma and I had been asked to write books for kids,” said Andrews. “So along came a brand-new career in my mid-60s. Boy that was a lovely surprise.”

“But I do miss singing,” continued Andrews. “Yes. I really do. I would have been quite a sad lady if I hadn’t had the voice to hold on to. The singing was the most important thing of all, and I don’t mean to be Pollyanna about how incredibly lost I’d have been without that.”

Despite losing her singing voice, Andrews has kept busy acting. Not only is she starring in a new TV series titled “Bridgerton,” but she’s releasing a memoir titled “Home Work” on Oct. 15.

“Everyone thinks I come from Windsor Castle or something,” she joked. “But I was so busy working as a kid. The only thing I had time for was to read on trains and planes. When I didn’t go to college because I was working, I said to my mom, ‘Are you sure I’m not going to miss college?’ She said, ‘Oh, you’ll have a much better education from life.’ But I always wished I’d had a real education.”

Still, Andrews is grateful for the many opportunities she has received in Hollywood – especially that of the world’s most famous nanny.

“I don’t know what [‘Mary Poppins’] writer P.L. Travers thought,” said Andrews. "She said to me, ‘You’re very pretty, and you’ve got the nose for it.’ I’m sure she laughed all the way to the bank. She was very tough and canny.”

While there’s no denying Andrews’ decades-long career as an actress, she does have a hidden talent.