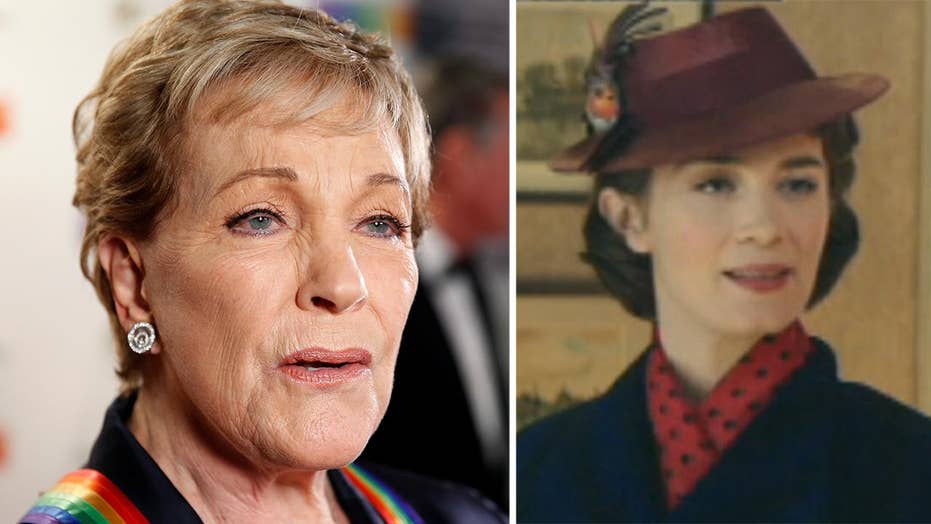 Julie Andrews weighs in on Emily Blunt as Mary Poppins

Top Talkers: Julie Andrews is pleased to hand over the magic bag and umbrella to actress Emily Blunt and calls the casting choice for 'Mary Poppins Returns' 'wonderful.'

Julie Andrews became an international star when she took on the role of the world’s famous nanny in 1964’s “Mary Poppins” – and now, the screen icon can’t wait to see another British actress take on the character.

Emily Blunt will be starring as Mary Poppins in the upcoming version, titled “Mary Poppins Returns,” which will fly into theaters Christmas Day 2018.

“Mary Poppins” tells the story of a magical nanny who offers music and adventure to two neglected children in hopes of bringing them closer to their father.

“I admire her enormously,” the 82-year-old told Closer Weekly Thursday of Blunt.

Andrews clarified that the modern take on the storyline won’t interfere with the classic.

“It’s a brand new film based on all of the other stories Walt Disney had in his trunk based on the P.L. Travers’ Poppins character,” she explained. “It’s wonderful Emily is the new Poppins.”

Andrews is still surprised by is the lasting impact “Mary Poppins” has had over the years.

Andrews, who starred in the film opposite Dick Van Dyke, said she’s still grateful for the film, which helped launched her career in Hollywood, along with 1965’s “The Sound of Music.”

“It was amazing,” she explained. “Singing is very, very close to my heart. The giving of that sound… over the years you begin to realize how fabulous [it is that] you can make somebody forget [their troubles].”

Van Dyke was so delighted about the reboot that the 91-year-old actor told ET in December 2016 that he would make a cameo appearance.

“… I get to do a little song and dance number,” Van Dyke told the celebrity news site. “I gotta be a part of it… This time there’s no four hours in the makeup chair, I grew into the part! I don’t have to wear makeup at all!”