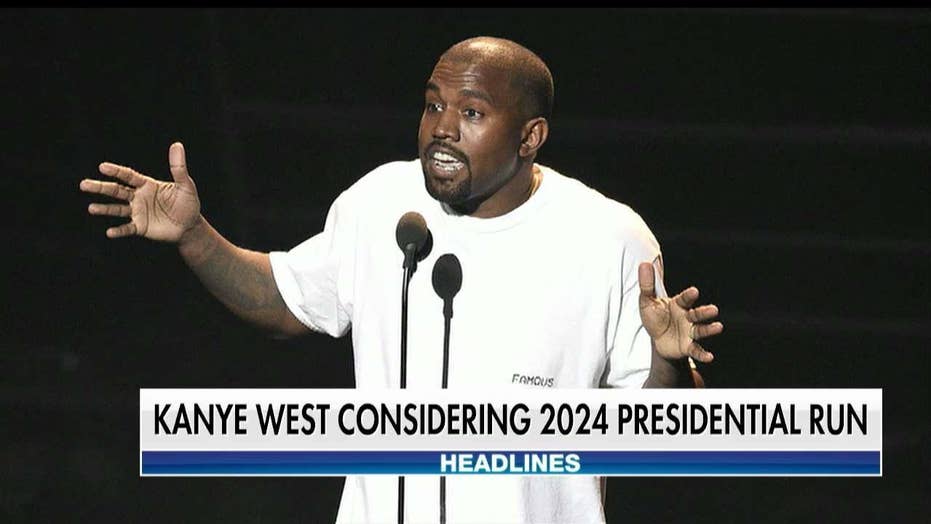 Kayne West is said to be "serious" about running for president according to his friend John Legend.

On Friday, Dan Wootton, host of his namesake podcast, sat down with Legend and the singer revealed that his good friend's presidential ambitious were something to take seriously.

"He said it multiple times," Legend told Wootton on the podcast. "I think he's serious."

FILE - In this Dec. 13, 2016, file photo, then-President-elect Donald Trump and Kanye West pose for a picture in the lobby of Trump Tower in New York. Trump is tweeting his thanks to rap superstar Kanye West for his recent online support. Trump wrote, âThank you Kanye, very cool!â in response to the tweets from West, who called the president âmy brother.â West tweeted a number of times Wednesday expressing his admiration for Trump, saying they both share âdragon energy.â The rap star also posted a photo of himself wearing Trumpâs campaign âMake America Great Againâ hat. (AP Photo/Seth Wenig, File) (Copyright 2016 The Associated Press. All rights reserved.)

The Grammy Award-winning artist went on to say that West's future interest in politics might also be the reason why he likes connecting with the current president, Donald Trump.

"I think that’s part of why he likes Trump is because I think he sees some aspects of himself in Trump and sees that Trump winning makes it feel like he could do it too," Legend explained.

Back in April, West caused a lot of social media controversy when he openly addressed his admiration and support of Trump on Twitter. The rapper later found himself battling a slew of backlash after he shared a photo of himself sporting a MAGA hat. And while many celebrities attacked West on Twitter, Legend decided to personally reach out to his friend via text message.

Legend sent the private text to West asking him to "reconsider aligning" himself with Trump and was shocked when the rapper and fashion designer shared his text message on Twitter with his 28 million followers.

West shared the text on Twitter without any comment, and Legend admitted to being "stunned" by his actions, but decided he was happy that people knew he had directly addressed the subject.

Following their disagreement, the two showed that despite their differences their friendship was still intact. Two days after West shared his friend's text message on Twitter, he took to social media again to share a photo of the two together.

West tweeted, "We got love. Agree to disagree."

And though Legend and his wife, Chrissy Teigen, are known to often speak out against the Trump administration, West and his wife, Kim Kardashian, seemed to have be embracing it.

Kardashian has also made headlines for her trips to the White House to work with the president on pardoning those who are serving long prison sentences related to drug offenses.

On June 6, Kardashian's advocacy for Alice Marie Johnson, a great-grandmother who at the time was serving a life sentence for a nonviolent drug conviction, resulted in Johnson's sentence being commuted by Trump and she released from prison.

The reality star returned to the White House on Wednesday and told fans that, after Johnson's release, she was inspired to help out more.

"It started with Ms. Alice, but looking at her and seeing the faces and learning the stories of the men and women I’ve met inside prisons I knew I couldn’t stop at just one," Kardashian tweeted. "It’s time for REAL systemic change."