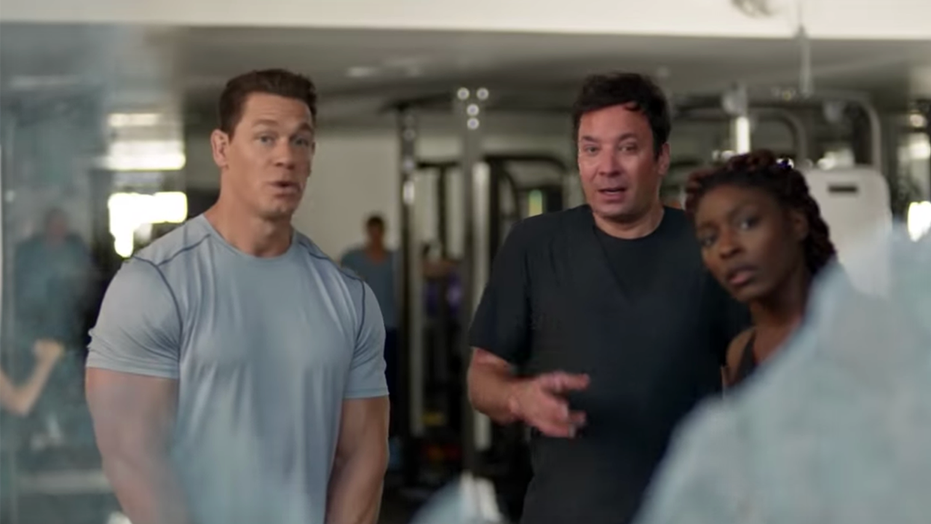 With 100 million viewers expected to watch the Super Bowl, a 30-second commercial is fetching upward of $5.6 million.

Jimmy Fallon and John Cena put their comedic chemistry on full display in the latest big game commercial for Michelob Ultra slated to air on Sunday.

The spot was revealed to the world on Tuesday and is aptly titled, “Jimmy Works It Out.” It features the funnyman and the 16-time WWE champion enjoying a couple of brews following a day of intense workouts.

In the commercial, Fallon, 45, and Cena, 42, are seen breaking a sweat with a trainer in a gym -- and Cena is clearly outworking his “Tonight Show” counterpart as Fallon struggles to keep up and even tosses a kettlebell through a glass window, nearly taking out a pedestrian.

“We should go,” a worried Cena says in the spot before the pair bolt to the nearest bar for a nice cold one.

“Working out sucks!” Fallon laments to Cena, who is the all-time leader in wishes granted for the “Make-a-Wish” foundation with a staggering record of 600-plus dreams he made come true.

“Come on, man! You just gotta see the lighter side of things,” Cena advises his pal Fallon at the bar.

With Cena’s words echoing in his mind, Fallon and the “Blockers” star hit the track for a run, passing Olympian Usain Bolt, who makes a cameo while Fallon pushes through his pain thanks to encouraging tunes from The Roots.

“Still got it, Jimmy!” shouts Bolt as he issues his patented lightning pose.

Fallon then hits the links with golf pro Brooks Koepka and hits a “birdie” before he and Cena take to the beach for a friendly competition of volleyball against Kerri Walsh Jennings and Brooke Sweat – but the two jokesters are bouncing on trampolines and when asked if they’d like to switch sides, they humbly decline.

At the end of a long day, in which Fallon also showed off his juke moves by dodging a few moving tacking dummies, he and Cena see themselves back at the bar, cold Michelob Ultras in hand.

“I feel great!” Fallon exclaims right before Cena moves in for a friendly punch.

“Little sore, little sore,” he states as the camera cuts wide and shows Fallon sitting in an ice bath.

The words: “It’s only worth it if you enjoy it,” sprawl across the screen as the 60-second spot ends.

The big game takes place on Sunday, Feb. 2 in Miami at the Hard Rock Stadium and is slated to start at 6:30 p.m. EST on FOX.