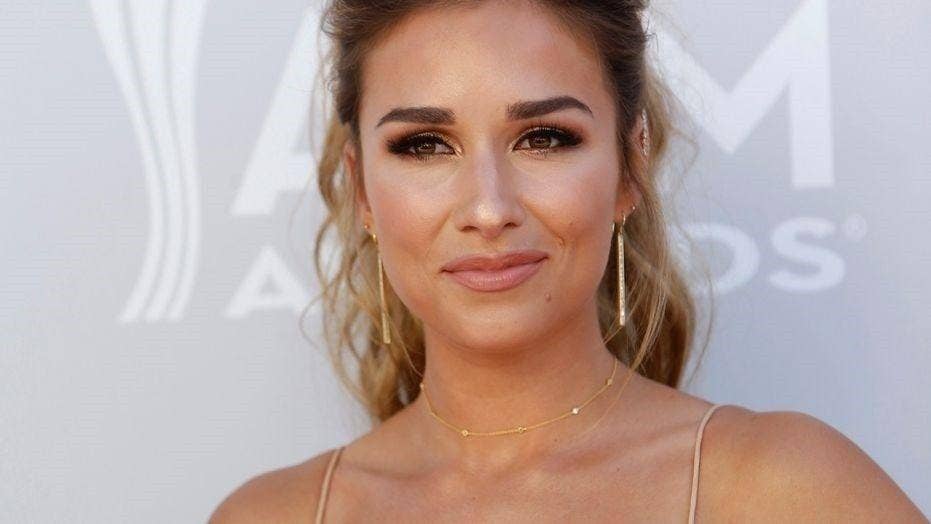 Jessie James Decker gets slammed by fans for drinking while breastfeeding

Country music singer Jessie James Decker posted a picture to Instagram of her breastfeeding her newborn son with a glass of what appears to be wine. While some fans supported the mother of three, many slammed the star for her behavior.

Jessie James Decker is happily adjusting to life as a mom of three.

Speaking to Fox News, the country singer got candid about the shift from raising two little ones to three. “It’s been amazing,” she told us. “The transition from two to three was definitely a little bit more like, ‘Wow! There's three people here.’

“From one to two [children] felt more natural. It was not as difficult because Vivianne was still a baby,” Decker added, explaining that her first two kids were “only 17 months apart, so Vivianne was still in diapers and drinking bottles” when the couple had Eric Jr.

“But Forrest, he's two-and-a-half years younger than my second, and we were out of diapers and not doing the bottle thing anymore, so I was like, ‘OK we have a new baby again.' It’s kind of like starting all over, but he has been, luckily, the easiest baby I’ve ever had. He is so easy. So happy. So go with the flow. Just an angel child.”

Since Forrest has been such an “easy” baby, the only “challenging” part for Decker has simply been just “running out of hands.”

“They're all crying because they all have their own separate needs,” Decker explained. "It could be that Forrest is hungry and he’s crying and then maybe Bubby [Eric Jr.] ran into a wall and hurt his head and he’s crying for that and [Vivianne] is upset because she can't get, I don’t know, her iPad working or something — it’s like you’re trying to balance all of their needs at once which is sometimes that can be the only overwhelming part.”

JESSIE JAMES DECKER GETS SLAMMED ON INSTAGRAM OVER HER DAUGHTER'S TAN

For her own part though, Decker, says that losing the baby weight after giving birth and feeling comfortable in her own skin again has been “tough.”

“I always try really hard to just tell myself: ‘Hey, you just grew a baby for nine months and now I have to feed this baby and breastfeed this baby,’ that should be my focus right now and not be so obsessed or focused on trying to look a certain way, there’s plenty of time for that,” she continued. “I’m not one of those women that's going to drop the weight and look the way I did before three months-post. That’s just not the way my body works. It honestly takes me nine months. Nine months to grow ‘em and nine months to go back to the way that I was before.”

In December, Decker went on Instagram to proudly share a post-pregnancy photo of herself. Asked where she gets her confidence from, the “Eric & Jessie: Game On” star admitted that she actually didn’t feel confident when taking the picture, which showed Decker smiling in a pink two-piece.

“It was my first time being seen in a bikini since I had a baby, so I was definitely nervous,” she revealed. “But I think the confidence comes from, ‘You know what? This is what’s real. This is what’s normal. These are not photoshopped pictures. This is the way I look.’

“I feel like I am just one of the moms and one of the women out there that's going through the same thing, and I’m not going to be rolling out there, looking all perfect the way that some of the expectations can be," Decker added. "I just look like me, and I feel like I just want to be able to be the voice and representation of what is real and honest for other women and that’s all I can hope for."

Decker has previously been outspoken about the challenges she's faced when it comes to post-pregnancy weight loss, going on Instagram to explain to fans her eating habits and how she tries to "stay active" as much as she can.

One go-to treat the country star finds "really good" is Jack Link's Protein Snacks. "It’s always something we got in the house," said Decker, who revealed she recently partnered with the food brand. "My husband’s a massive fan, and I actually give it to my kids too as snacks sometimes. It’s a perfect fit. I’m a big meat girl. I’m a big protein girl."

As for how she and her hubby ensure they have couple time? Decker credits keeping their children’s bedtimes and schedules “very structured."

“I think that’s really good for kids, but it’s also good for moms and dads,” Decker explained. “You know the other night they were tucked in and sleeping like little angels, and we had a glass of red wine and took a bath and just hung out with each other and watched Netflix, had some popcorn, and we had a blast.

“I just feel like we take advantage of these times, where we got a few hours just to hang out and be adults and focus on one another, and we're blessed with that. But I always say, too, that kids grow up one day and they leave the nest, so we enjoy the time with them running around because one day they will be grown-ups.”

When it comes to being intimate, Decker – who previously said she and Eric, as then parents of two, would “plan” nights – are now enjoying an unplanned sex life despite the new addition to their family.

“[Eric’s] retired now, so we can be spontaneous!” she said with a laugh.

And although the couple has their hands full with three little ones, when it comes to having a fourth baby, Decker isn’t counting it out.

“I would say never say never,” she admitted. “We’re not against it and we’re not planning it either. I think if it were to happen naturally, another baby is always a blessing, but as of right now we are very happy with baby Forrest.”