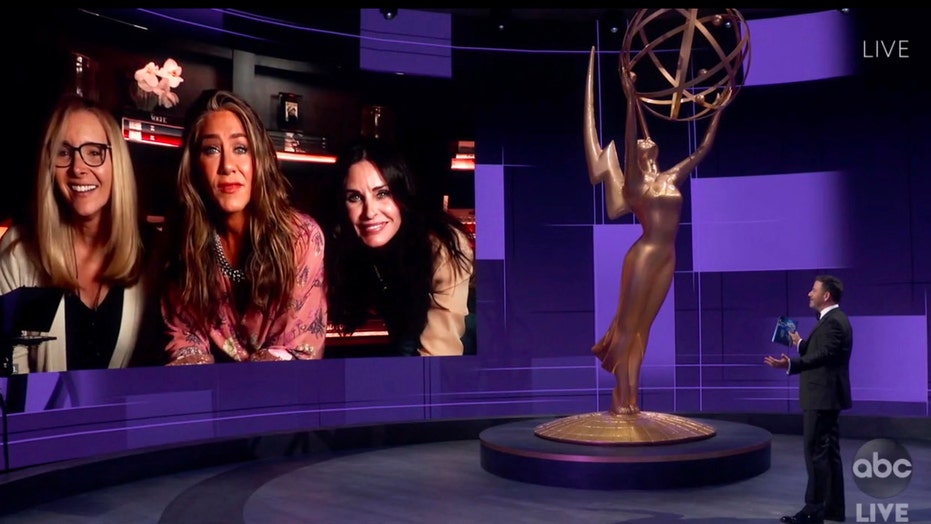 There was a mini "Friends" reunion at the 2020 Emmys with Lisa Kudrow and Courteney Cox joining Jennifer Aniston during her second bit at the award show Sunday evening.

Earlier in the night, Aniston helped Kimmel present an award but immediately rushed home for the announcement for her own category. Aniston was nominated for outstanding lead actress in a drama series for her work in Apple TV+'s "The Morning Show."

When Kimmel, 52, checked in on Aniston, the 51-year-old actress replied: "I barely made it, but we're here."

Not too long after, Jason Bateman -- who earlier in the evening crashed the Staples Center audience, but was told to leave by Kimmel due to the coronavirus pandemic -- joined the "Friends" co-stars.

"Oh, look who it is, the host with the most, rudeness! You call to kick me out of my own house, too, freak?" Bateman told Kimmel.

Aniston teased that Bateman, 51, is living with the stars "just until he goes off to college."

"By the way, you guys are killing it, this is so great!" Aniston said, before later adding: "We’ll be watching! Dinner’s ready, we’re DVRing it."