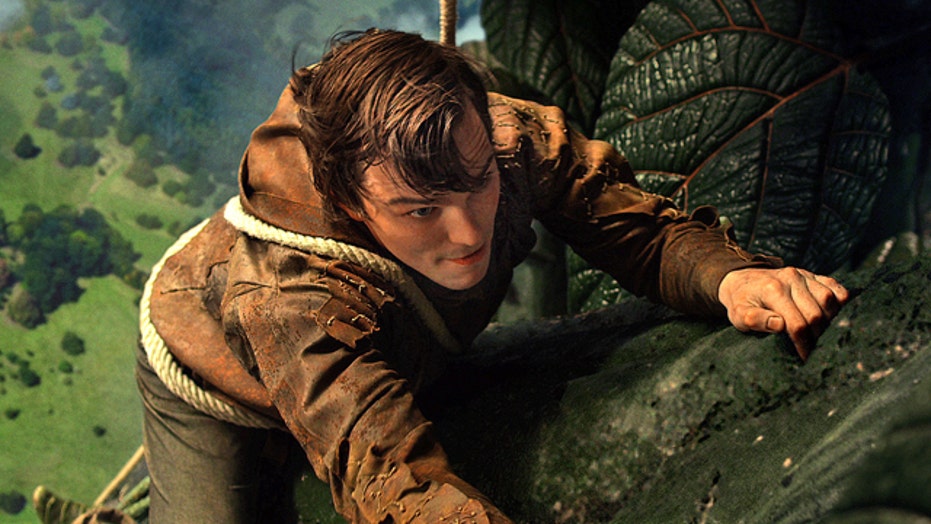 Matt Atchity, Editor-in-Chief of RottenTomatoes.com, joins us with the Tomatometer scores heading into this weekend's box office.

Bryan Singer’s “Jack the Giant Slayer” is a gentle giant, a short and sweet climb that’s fun all the way up the bean stalk.

For those longing for more epic adventure but were disappointed with the convoluted, drawn out “The Hobbit” last year, “Jack” is a whimsical, compact and wholesome adventure story that provides solid family entertainment with mediocre special effects.

Here’s the short of it: When Jack (Nicholas Hoult) is given some mysterious beans by a frightened monk and given the strict warning to not get them wet, his farm boy life takes a drastic change. Princess Isabelle (Eleanor Tomlinson) flees her castle so she won’t have to marry Roderick (Stanley Tucci), her father’s creepster advisor and finds refuge with Jack in his farmhouse. But an accident causes the beans to get wet and up goes the bean stalk with Jack’s house, and Isabelle, attached.

The King (Ian McShane) sends his knights, including Elmont (Ewan McGregor), along with Jack to rescue his daughter. Thus begins the epic adventure up the stalk and into the land of the giants, thwarting the blood-thirsty beasts as well as Roderick’s double crossing.

Singer is no stranger to epic fantasy, having directed two “X-Men” films and “Superman Returns.” He makes “Jack” work by keeping the action running smoothly with a natural progression. Each set piece (and there are plenty) is choreographed with finesse, never really rushing the action but keeping it brisk and entertaining.

Unfortunately, for all the boyhood adventure and male bravado going on, there’s really not much happening for the women. Isabelle isn’t a strong female character at all. She’s the old-school archetype of the defenseless princess in need of rescue by the courageous male hero. Sadly, there’s nothing for her to do, which perhaps tilts the target of this movie more to young boys than to both genders.

It sure doesn’t hurt to have a cast of talented actors. Nicholas Hoult is on fire this season starring in the zombie comedy “Warm Bodies” and now slaying giants in this family adventure.

Tucci delightfully chews the scenery as the pompous, conniving advisor, determined to gain control of the giants and rule over the Earth and giants kingdoms. Bill Nighy provides the voice of the Giant General, and when Nighy is given any type of role that lets him act beyond normal, he embraces it, creating his typical burst of hammy energy.

Watching Ewan McGregor as the wise knight brings back memories of a younger McGregor as Obi-Wan Kenobi  from the “Star Wars” prequels. Though the characters are similar, McGregor seems to be more at ease with this knight in shining armor than his Jedi knight, perhaps because he has less at stake here than protecting the “Star Wars” legacy.

On the technical side, the special effects are average. We’ve seen enough mighty green creatures over the past few years that they all start to look alike. Here, the giants look blatantly cartoonish.

The scenery and sets, though, are breathtaking. The canvas of the Giant Kingdom above the clouds, with its vistas of mountains and waterfalls pouring into the sky, are especially cool to see in IMAX.

Also adding to the bravado and old-school adventure is John Ottman’s grand, sweeping orchestral score, with its bold themes that keep the audience one step ahead of the action all the way to the rousing finish line.

So if you’re not quite sick of fairy-tale theater, “Jack the Giant Slayer” is solid family movie.