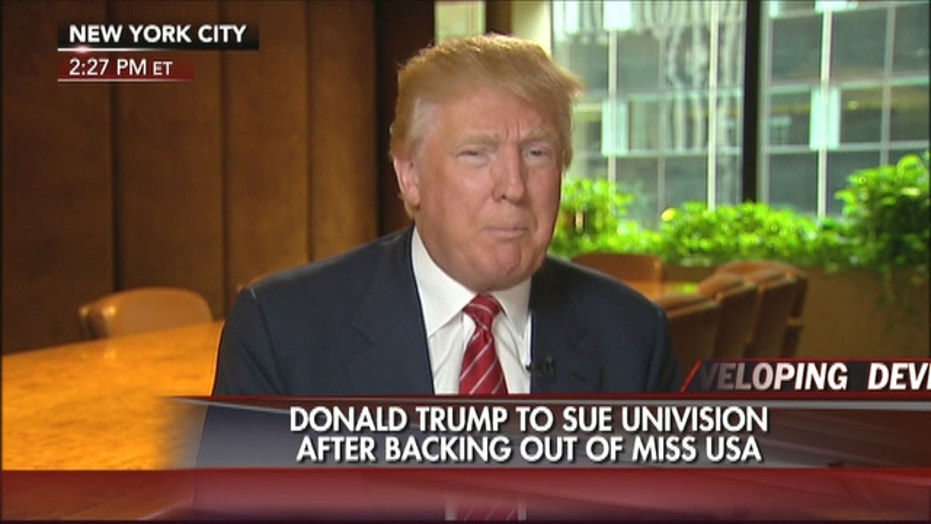 Businessman Donald Trump says he will sue Univision for backing out of their contract with the Miss Universe Organization.

Presidential candidate and mogul Donald Trump says he plans to sue media giant Univision for "hundreds of millions of dollars" for severing ties with him and the Miss Universe Pageant organization.

Univision had said earlier Thursday that because of offensive comments Trump made about Mexico and Mexicans when he launched his campaign, it was breaking off with the pageant organization – of which Trump is an owner – and that it would not air the event on July 12.

Trump told Fox News’ Gretchen Carlson that Univision was breaching its contract to air the pageant for five years.

“I’m going to have to sue Univision now because I speak negatively about trade with Mexico," he said. "Univision says you have to stop talking badly about Mexico... They have a signed contract."

Trump, during the interview, did not back down from the statements he said about Mexico – but he said his words were twisted and he did not disparage all Mexicans or Latinos in general.

Latinas have played a major role in the Miss Universe pageant, winning the crown 23 times since 1952. In 2014, contestants from roughly 24 Latino countries participated.

The contract with Univision, which Trump said was a five-year, $15 million deal, was signed in January.

"They can't do this," he said. "They want me to stop saying the facts."

Univision officials told Fox News Latino they would not comment beyond this morning's statement.

But some of the news division's biggest stars -- including anchors Maria Elena Salinas and Jorge Ramos, both Mexican-American -- didn't hesitate to weigh in or suggest they agreed with Univision's move.

Michael Cohen, one of Trump's lawyers, said he was in the process of hiring outside counsel to take legal action.

"We intend to pursue all legal rights and remedies available to Mr. Trump pursuant to the terms of the license agreement as well as a defamation case against Univision," Cohen said.

Trump said in his campaign speech that Mexico imports to the United States drug dealers, rapists, and others who have an adverse impact on this country.

The candidate says, "I love the Mexican people, but I'm running for President and our country comes first."

Trump said Univision apologized to him after it made its announcement about the pageant, and told him they found themselves in a difficult spot.

In Thursday's statement, Univision said it had seen the "the work ethic, love for family, strong religious values and the important role Mexican immigrants and Mexican-Americans have had and will continue to have in building the future of our country. We will not be airing the Miss USA pageant on July 12th or working on any other projects tied to the Trump Organization."

"Univision News and the local news division will continue to provide comprehensive coverage of all candidates, including Mr. Trump, to ensure our audience continues to have access to all points of view."

The mayor of Doral, Fla., the most recent location to host the Miss Universe Pageant, said Univision is right not to air the event.

“He better retract what he said before this grows even bigger,” Boria said. Many Latinos here and in Latin America, he said, “grow up watching Miss Universe.”