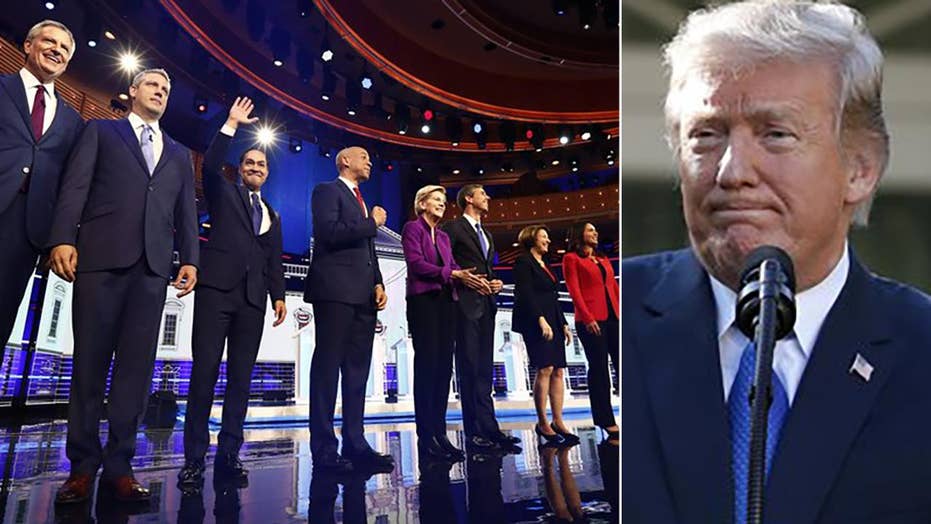 Trump: NBC, MSNBC should be ashamed for having such a horrible technical breakdown during debate

It appears plenty of people were willing to deal with awkward audio issues to hear from 2020 presidential hopefuls.

The first night of NBC’s two days of Democratic primary debate coverage drew 15.3 million viewers across MSNBC, NBC and Telemundo – exceeding industry expectations despite being down significantly from the first Republican primary debate of the last election cycle.

MSNBC averaged 5.9 million, while NBC averaged 8.7 million and 719,000 tuned in on Telemundo. The first GOP primary debate in 2015 on Fox News averaged 24 million viewers and remains the highest-rated nonsports cable telecast in history.

The Democratic debate averaged 4 million viewers among the key demographic of adults ages 25-43, with 2.7 million watching on NBC, 1.3 million on MSNBC and 326,000 on Telemundo.

The NBC-produced Democratic debate features 20 candidates split into two groups, with 10 taking the stage on Wednesday and the other half scheduled for Thursday evening. Many of the big names, such as Joe Biden and Sen. Bernie Sanders, are on the second edition of the two-day affair. Back in 2015, the lesser-known candidates had their own “happy hour” debate prior to the main event. Fox News’ coverage of the undercard debate back in 2015 beat MSNBC’s coverage of last night’s event among total viewers, as 6.1 million people tuned in compared to MSNBC’s 5.9 million.

Things derailed quickly after the candidates struggled to hear Todd's first question on gun control and a hot mic picked up off-stage sound. As microphone issues continued, many of the candidates smiled awkwardly while others like Sen. Amy Klobuchar, D-Minn, began laughing.

"I think we had a little mic issue in the back," Todd said as he looked toward the control room at the back of the venue, later adding, "We have the audience [audio] on."

"What is happening?" Maddow asked at one point when a hot mic was picking up off-camera chatter. “You know, we prepared for everything. … We did not prepare for this."

Audio gaffes weren’t the only things criticized during NBC’s debate, as some watchdogs disagreed with the decision to include Maddow, a far-left opinion host; moderators have typically been straight-news journalists. Hollywood Reporter media reporter Jeremy Barr also noted issues with both the Peacock Network’s streaming app and MSNBC’s live stream and others mocked NBC for appearing to favor Sen. Elizabeth Warren, D-Mass.

Some critics also alleged that the debate was loaded with “liberal talking points” and softball questions.

“A Media Research Center analysis finds 39 of the questions at the debate echoed liberal talking points or were framed around a liberal world view, vs. only five that challenged liberal/Democratic assumptions,” MRC senior editor Rich Noyes wrote.