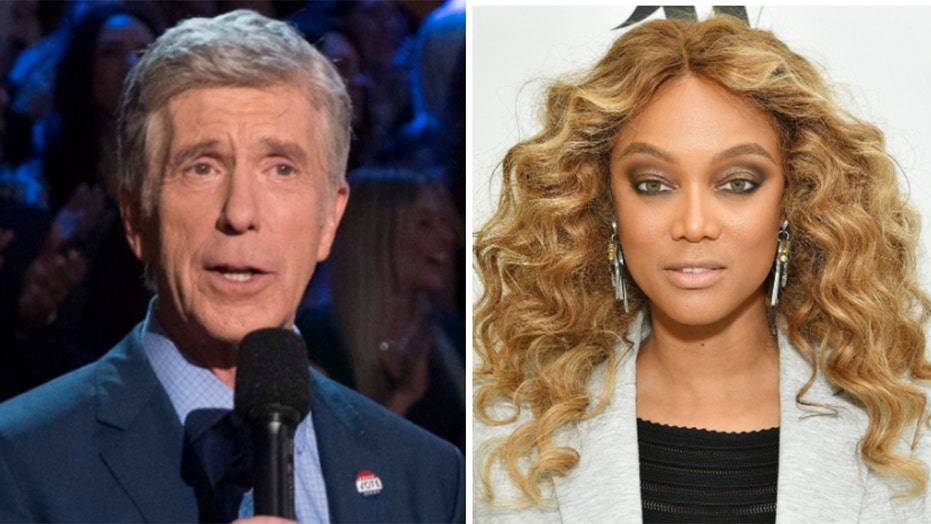 Tyra Banks took the stage as the host of ABC’s “Dancing with the Stars” for the first time Monday night and fans were less than thrilled with her performance.

In July, the network announced that the former “America’s Next Top Model” host would be brought in for Season 29 of the hit reality dancing competition to replace suddenly ousted hosts Tom Bergeron and Erin Andrews.

Fans were stunned when Bergeron suddenly announced on Twitter that he would not be back. He hosted the show since its debut in 2005. Andrews, who was brought on as co-host in 2014, followed soon after as it came to light that the network had decided to move the show in a new direction.

“ABC opted not to pick up Tom's option. In the fine tradition of Hollywood cliches, they're ‘Going in a different direction,’” a statement from Bergeron’s reps provided to Fox News read at the time.

Tyra Banks was slammed on social media for her first hosting gig replacing Tom Bergeron on 'Dancing with the Stars.' (Getty Images)

Although Banks has previously said that her predecessors leave behind big shoes to fill, she considers herself a fan of the show and was excited to take on the hosting duties. In addition to “America’s Next Top Model,” she previously hosted “America’s Got Talent.”

However, it seems those skills didn’t necessarily transition over to “DWTS” as many who tuned in to Monday’s Season 29 premiere took to Twitter to not only lament the loss of the two previous hosts but slam Banks' first run at the new gig.

"Can Tyra Banks be the first person voted off, thanks!  #dwts," one user wrote.

"Tyra banks has ruined dancing with the stars..she tries to be funny but keeps falling flat...#bringtomback #DancingWiththeStars," another user posted.

"2 minutes in and I'm already over #TyraBanks as host. #DWTS," a third user noted.

"Reminder that #DWTS firing Tom & Erin was ridiculous and unnecessary, Tyra Banks is literally the worst host that’s ever existed, and Carol Baskin killed her husband. Don’t even give @DancingABC the satisfaction y’all," another person wrote, noting the inclusion of the controversial "Tiger King" star on the celebrity roster for this season.

"#TyraBanks don't quit your day job dear. Hosting DWTS is not your strength," another user wrote.

"I’m sorry, don’t like to put people down, but Tyra Banks is so annoying. Have watched since day 1, but not sure if I can take her..." someone else wrote.

"I'm sorry but Tyra Banks is so freaking fake and annoying! why in the world would they replace Tom bergeron and Erin Andrews. She's awful #DWTS," another user wrote.

"Can I just say, what the heck was ABC thinking replacing Tom Bergeron with Tyra Banks on DWTS.  His wit and quick comebacks made the show interesting.  It’s so boring now I can’t stay awake.  #DWTS," a Twitter user wrote.