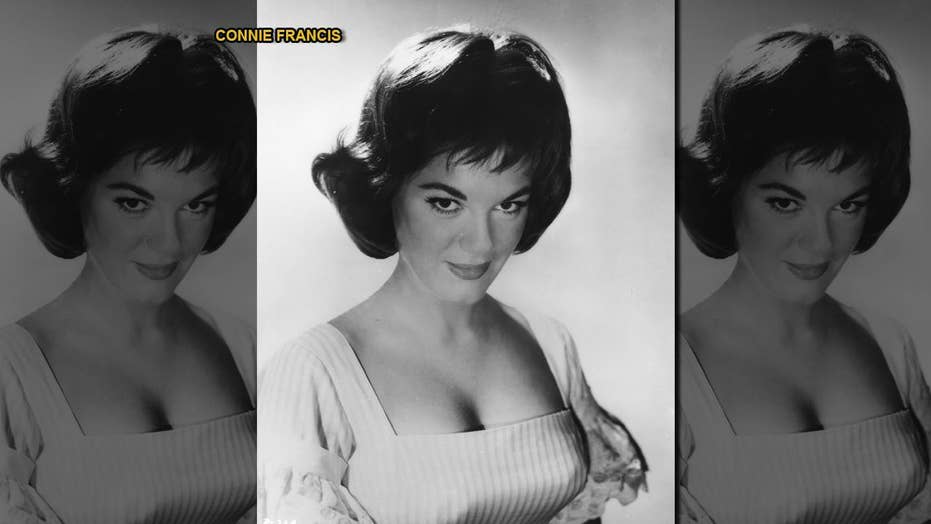 Connie Francis opens up about her horrific 1974 rape

Fox411: Beloved singer Connie Francis come forward with a tell-all titled 'Among My Souvenirs,' where she candidly opens up about one of her greatest tragedies.

The beloved singer, who is recognized as the top-selling female vocalist of the ‘60s, has enjoyed a lasting career, but her success didn’t come without its fair share of heartache. The 80-year-old has chosen to come forward with a tell-all titled “Among My Souvenirs,” where she candidly opens up about one of her greatest tragedies.

The Washington Post previously reported that in 1974, police found Francis in a Long Island hotel room naked, gagged and tied to an overturned chair. She was terrorized for nearly three hours at knife-point, raped and robbed. The crime led to a nervous breakdown, a crumbling marriage and it nearly ended her career.

Fox News spoke with Francis about opening up to fans.

Fox News: How did you cope with being raped in 1974?
Connie Francis: I had a lot of help. I had good friends, a family who supported me and my sense of humor… But I didn’t have the benefit of going to a support group for women who were raped because it would have been in the National Enquirer the following week. So I had to do that in the privacy of my own home. But it did take seven years out of my life. I didn’t grant an interview for seven years. I didn’t sing for seven years. It was a horrible experience.

Fox News: Which was the most difficult chapter for you to write and why?
Connie Francis: My brother’s murder. I rented out a room in the Aladdin Hotel in Las Vegas for two weeks to write the chapters on the rape and my brother’s murder. I figure once I got those out of the way, I would be able to concentrate on the lighter aspects of my life. I needed to put humor into my book. The thing that saved me has been my sense of humor. So I tackled those two subjects first.

Fox News: Do you think your brother’s death could have been prevented?
Francis: No. My brother was a former district attorney. Then he became involved with the mob. And he cooperated with the government for three years. There was no way he could have been saved. There was just no way when it was made public. I think had I been in a better frame of mind, had it not been [for] the rape, I would have had more of a handle on what he was doing and I would have prevented him from getting involved with such unsavory people. But I had my own problems and I took my eye off the ball. So to a large degree, I blame myself.

Fox News: What’s the story behind your famous song “Who’s Sorry Now?”
Francis: My father wanted me to record that song for a year and a half and I turned him down. It was a square song, it was written during the 1920s, and the kids on "American Bandstand" would laugh me right out of the show. He said, “If you don’t sing this song sister, the only way you’ll get on 'American Bandstand' is if you sit on top of the television set.” So I did it as the last song. I stretched the other songs before I got to “Who’s Sorry Now” so there wouldn’t be time.

But there were 16 minutes left. My father said, “If I have to nail you to that microphone, you’re gonna do ‘Who’s Sorry Now.’” So I did it. I didn’t like it… I remember that record had been out for three months and it went nowhere... But Dick Clark liked it… It was a cosmic moment for me. It’s a moment I’ll never forget. Because I knew in five seconds my life would never be the same. And it wasn’t. It was a happy shock.

Fox News: How did you and Don Rickles meet?
Francis: Don Rickles was the one who taught me how to really laugh. I think I belly laughed for the very first time because of him. I owe a lot to Don Rickles because he made me see humor in things that ordinarily I wouldn’t have seen humor in.

The first time he asked me out on a date in 1961, he rented a shiny new Corvette sports car and we went to this elaborate movie house where they had valet parking. When we pulled up, the valet guy said to Don, “Wow Don, she’s a beauty.” I said, “Why thank you!” Don responded, “The car dummy, the car.” He was really the best. He was a very sweet, sweet man.

Fox News: How did you manage to save Don’s life?
Francis: He came to me petrified. He said that there was a mobster in the audience [at his show] with a date. But he didn’t know he was a mobster. Don told him, “Hey dummy, this floozy your latest thing? You can do better than her, cause I’ve seen better legs on Sonny Liston.” Don said, “Connie, the guy said he’s gonna break my legs!” So I made a phone call because I did have connections. The mobster was from New Jersey so I knew who to call. He never knew I did that.

Fox News: You were one of the few women who left Frank Sinatra waiting.
Francis: I got weak in the knees when I met Sinatra. I was actually afraid to meet him. There were two people I idolized: One was Frank and the other was Judy Garland. I got to meet both of them. Frank invited me to a party. He rented a whole restaurant to have a dinner party for me in Las Vegas.

The first night that we met, he used vile language, not at me, but at somebody else. I was with Don Rickles and I said, “I’m outta here. You can babysit him all night if you want to.” So Frank came up and said, “Is there a problem Don?” Don said, “Well you used language that offended her, Frank. She was afraid you would use the F-word.” Frank said, “Well I didn’t disappoint her, did I?” Don said, “Don’t you see that sign on her forehead? It says ‘I’m a virgin.’” Frank then said, “The only virgins I know in Las Vegas are 4-year-olds and ugly.” He did apologize, which is very rare for him. And from there we had a wonderful friendship.

Fox News: Was there anything about Judy Garland that surprised you?
Francis: Yes, it was the time when she was going through her divorce from Sid Luft. She had guards around her house. He wanted the children. She talked about how she was putting her children through another day in hell. She was very remorseful. She was drinking a lot of red wine and she said she wanted to escape somewhere, but she didn’t know where. I felt so bad for her.

Fox News: It’s been said you’re still open to finding love. What would it take to impress you?
Francis: A lot! First of all, I’ve been very unsuccessful in that arena. I chose the wrong men for the wrong reasons. If I had put as much thought in selecting husbands as I did with Vegas openings, I would have been fine. But, my personal life was always secondary to my career.