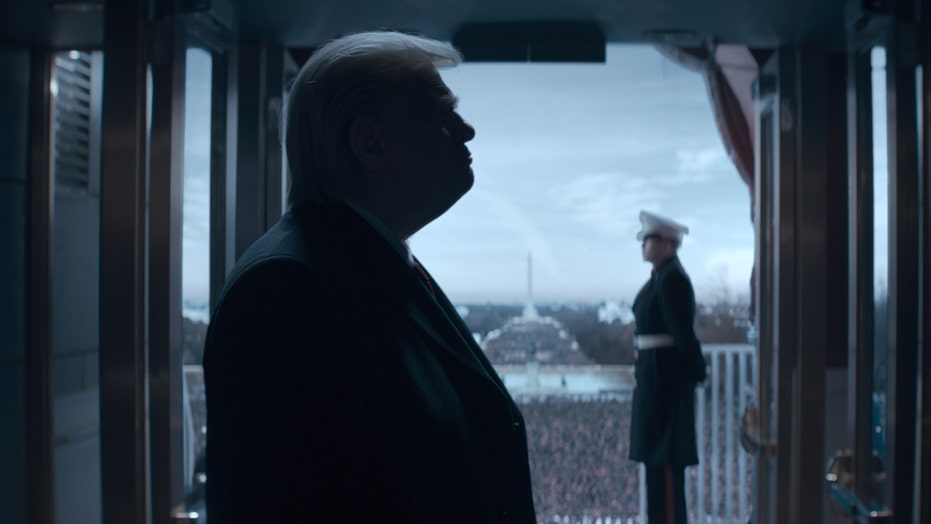 The network announced in June that it will air the two-part, four-hour series on back-to-back nights in November following the 2020 presidential election. The two actors star as the U.S. president and the former FBI director in a TV adaptation of Comey's 2018 book “A Higher Loyalty: Truth, Lies, and Leadership, The Comey Rule.”

In the trailer, Gleeson’s Trump sits down to dinner with Daniels' Comey, where the newly elected president laments that some people in the FBI "have it in" for him and how “nobody gets treated as unfairly as I do.” Meanwhile, Daniels’ Comey asks why four people with ties to Russia are working on his campaign.

The trailer ends with Trump whispering in Comey’s ear that he’s looking forward to working with him.

Throughout the trailer, Daniels is front-and-center while Gleeson’s face remains somewhat obscured at all times. In its announcement, Showtime offered viewers images of both actors in makeup as their respective characters. While Daniels’ Comey is featured in a dramatic close up while on the telephone, Gleeson’s Trump is seen only in silhouette, seemingly depicting the rainy day of Trump’s inauguration.

Showtime has previously stated that the miniseries is not a biopic about Comey. Instead, the network promises an “insider’s journey down the corridors of power, where decision-makers struggle to apply old norms to a dramatic new paradigm in the face of Russia's deep and unprecedented penetration into American politics, with our nation’s rule of law hanging in the balance. Each character’s actions in these historic months made the careers of some, destroyed the careers of others and helped shape the incendiary political landscape we live in today.”

Part one of the series will focus on the early days of the infamous Russia investigation as well as the FBI’s probe into Hillary Clinton’s emails and the impact they had on the 2016 election. Part two will dive into the day-to-day happenings of the deteriorating relationship between Comey and Trump during the “chaotic first months of the Trump presidency – where allies became enemies, enemies became friends and truth depended on what side you  were on.”