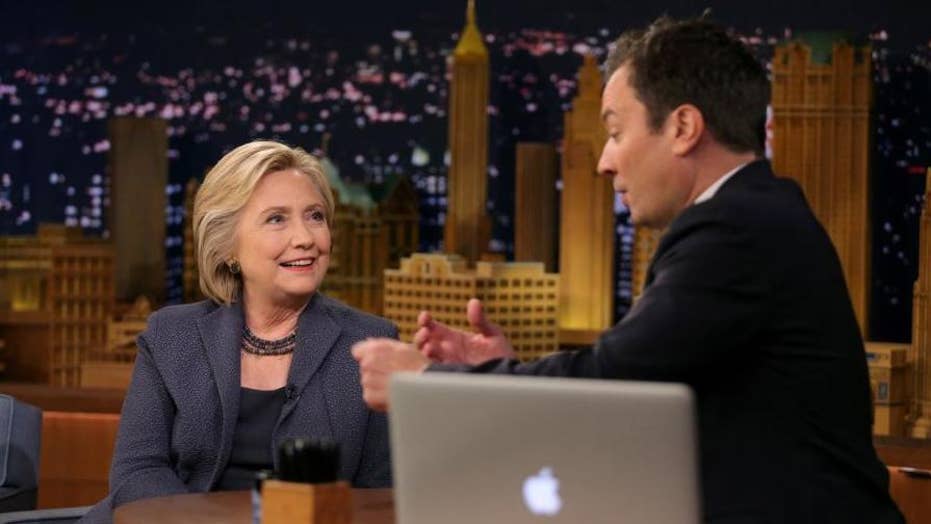 Hillary goes off on Trump, the entire GOP and gun control

Reaction to Clinton's criticism on 'Outnumbered.'

On Wednesday night the former Democratic presidential nominee appeared on "The Tonight Show with Jimmy Fallon" to plug her new book about the 2016 presidential race -- and criticize the Trump administration's reaction to the hurricanes in Puerto Rico and the deadly shooting in Las Vegas.

Host Fallon started out by addressing Clinton’s new book, titled "What Happened." Clinton said she hoped to “pull the curtain back” on the campaign and “invite people in to see what happened from my perspective.”

She spoke about Election Night and how “devastated” she was by her loss -- and how she might have felt better if a Republican other than Donald Trump had defeated her.

“I wouldn’t be so worried about my country and the world as I am now when I see what’s going on every single day,” Clinton said.

"If they aren’t the highest priority of your government in responding to such a terrible natural disaster, what are you people spending your time doing, right? Golfing, tweeting, watching cable TV?," she said.

Clinton continued to talk about the issues, specifically the recent calls by Democrats, and some Republicans, to tighten gun control laws, following the Las Vegas massacre.

Taking direct aim at Trump and GOP, Clinton said, “I can’t believe that one whole political party in the greatest country on Earth is totally sold to the gun lobby and will do whatever they are ordered to do, despite the loss of life.”

Earlier in the week, Clinton came under fire for a tweet in which she suggested that a legal silencer might have made the Las Vegas tragedy worse.

But Politifact determined that “a suppressor would not have made a difference” in the Las Vegas shooting because of “the position of the weapons and because of the distance of the shooter from the crowd.”

Nevertheless, she persisted in calling for tighter gun control laws.

“I mean, this makes no sense,” she said.