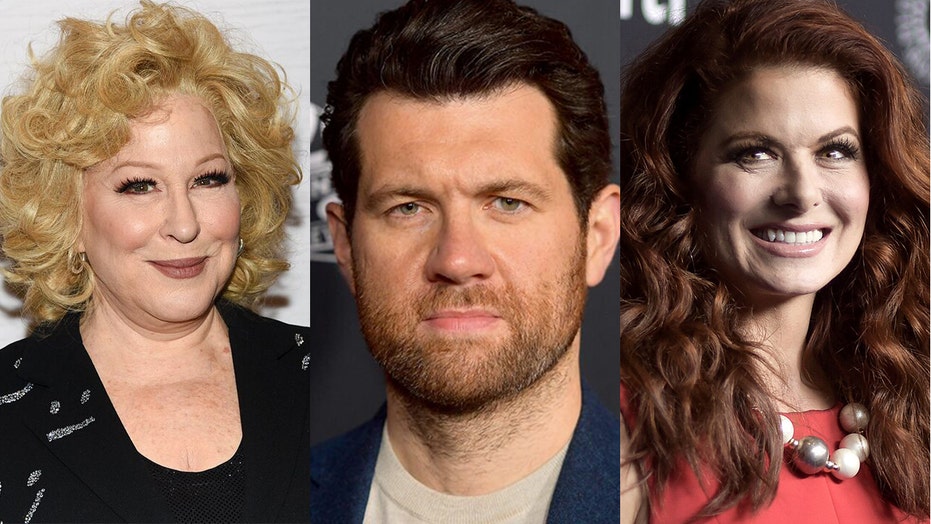 All eyes throughout the country have been on the high court following Ginsburg's death Sept. 18 at age 87. She had been on the court for more than two decades.

Many argue that the seat should not be filled until after the election in an effort to give the American people as much of a say as possible in a decision that could affect the makeup of the court for a generation. Despite the debate, Trump forged ahead and announced Barrett as his selection on Saturday.

Celebrities are joining many Democrats in objecting to the timing of the nomination, and also frame the battle as one over health care in the time of COVID-19. Several took to social media to issue a rebuke against Barrett’s views on abortion as well as the threat of largely conservative court amid legal fights for the Affordable Care Act.

"Look at this. FIGHT BACK!!!" wrote comedian Billy Eichner over a video of Barrett previously suggesting waiting to fill a Supreme Court seat.

"THIS IS A LAST DITCH POWER GRAB," Debra Messing wrote. "At GRAVE risk:
Universal Healthcare
Preexisting Conditions PROTECTIONS
Women’s Bodily Autonomy
Voting Rights
Response to the Climate Crisis
#Trump said he is pushing this through so she can vote him in w/ contested  election results."

"I don’t want to condone this process, but I do want to see everyone on the judiciary committee give their time to @KamalaHarris so she can filet Amy Coney Barret," wrote 'West Wing" star Bradley Whitford.

"120 million people could be kicked off healthcare insurance during a pandemic," Alyssa Milano shared. "Barrett has a track record of disagreeing with the Supreme Court’s decision upholding the ACA. She critiqued Chief Roberts’ opinion upholding the law in 2012. "Just saying. #NoSCOTUSVote #COVIDー19."

CELEBRITIES REACT TO NIGHT ONE OF DNC: 'VOTE...LIKE YOUR LIVES DEPEND ON IT'

"Disgraceful. If anyone in your life were as two-faced, callous, dishonest & selfish as this, you'd never want to associate with them. Vote them out. And then pack the courts," wrote "Westworld" star Jeffrey Wright.

"The wildest thing about this Barrett nomination is we’re so caught up in her conservativeness that we forget TRUMP DOESN’T EVEN HIMSELF BELIEVE THIS S---. he is not a religious man. A family man. Nothing. It’s a lie that got so out of hand he’s gotta roll with just to stay a D---," Chrissy Teigen added.

Meanwhile, Bette Midler wrote: "Do you think they tried very hard to get Donald to read anything about #AmyConeyBarrett, or did they just say, “We found a lady Mike Pence” during a commercial break on OANN?"