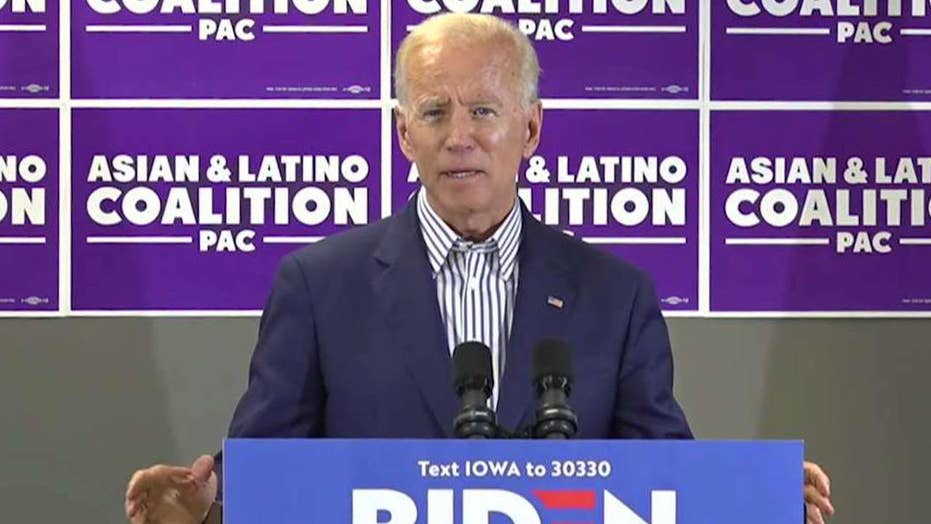 "Real Time" host Bill Maher went to bat for former Vice President Joe Biden on Friday night after a series of highly publicized gaffes by the Democratic frontrunner this week, which Maher referred to as "senior moments."

"You know he doesn't mean it," Maher said about Biden. "There's going to be some senior moments with Joe Biden. Don't we just have to get used to that?"

Maher said Biden's critics would likely argue that every verbal mistake is a sign that the 76-year-old Biden shouldn't become president. But Maher said he wasn't buying that argument.

"I really don't think there's a realistic link there," Maher said. "I don't think he's about to push the button or he thinks he's moving the remote and he blows up Russia. I don't."

He continued: "I'm just saying that we need to get used to the fact that if he's the nominee, that there's going to be some senior moments and we can't lose our s--- every time there's one."

During a fiery speech at the Iowa State Fair on Thursday, Biden told the crowd "We choose truth over facts" -- an apparent allusion to the left's allegations of deception from the Trump administration. Later on, he spoke to the Asian & Latino Coalition PAC urging everyone to "challenge" students in low-income neighborhoods.

"What we should do is, we should challenge these students in these schools. They have advanced placement programs in these schools," Biden said. "We have this notion that somehow if you're poor, you cannot do it. Poor kids are just as bright and just as talented as white kids."

One of Maher's Friday guests -- former Gov. Terry McAuliffe, D-Va. -- agreed with the comedian that Biden's slip-ups are no cause for concern in assessing his suitability for the Oval Office.

McAuliffe -- a former chairman of the Democratic National Committee who also chaired campaigns for both Bill and Hillary Cliinton -- said Biden's occasional misstatements were preferable over the "10,000 lies" he claimed President Trump has made since taking office.