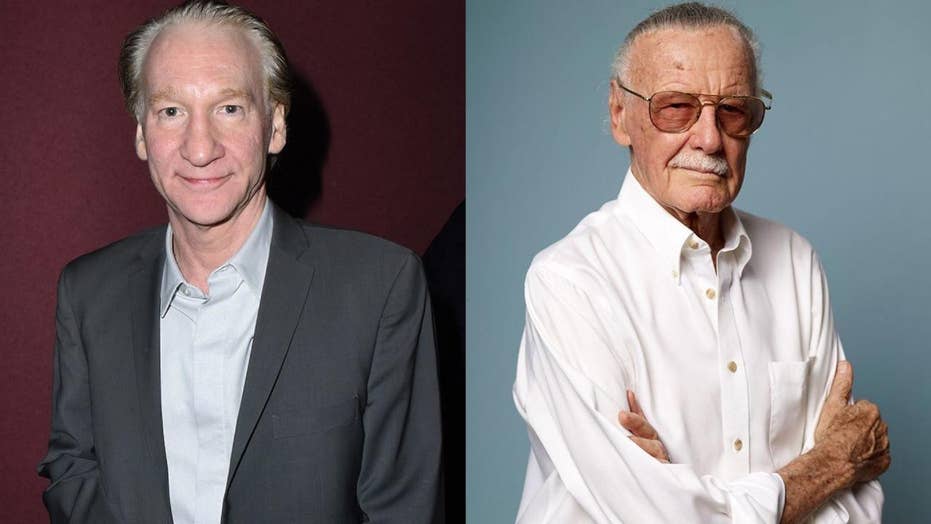 Bill Maher is getting heat for criticizing comic book fans for mourning Stan Lee's death. He even blames those fans for the election of Donald Trump.

Bill Maher admitted this week he's "agnostic" on Stan Lee's work but the comedian still doubled down on his recent controversial remarks after the Marvel Comics co-creator died in early November at the age of 95.

In a blog post, the “Real Time With Bill Maher” host criticized those mourning the comic book icon who introduced the world to superheroes such as Spider-Man, X-Men and The Incredible Hulk, among others, blasting people for being in "deep, deep mourning" over a man who simply inspired millions to "watch a movie." Maher went on to chide comic book fans noting that, when he was young, it was understood that they were just for children and that people were supposed to grow up and move on to “big-boy books without the pictures.”

The comments drew swift backlash from comic book fans as well as Lee's company POW! Entertainment, which called the remarks "disgusting." The organization said Lee inspired millions to read, "that heroes can have flaws and even villains can show humanity within their souls.”

But Maher said Wednesday that the outrage over his opinion on the subject "makes his point for [him]."

"I don't read comic books. I didn't even read them when I was a child. What I was saying is, a culture that thinks that comic books and comic book movies are profound meditations on the human condition is a dumb f---ing culture. And for people to get mad at that just proves my point," Maher told Larry King during a guest appearance on "Larry King Now."

Maher clarified he wasn't intending to take a "swipe" at Lee — but the "comic book concept" in general.

At the time, Maher said he didn't even realize people were angry about his comments.

"I'm so glad that I don't follow social media like that ... every stupid thing that people lose their s--t about."

"Bill doesn’t understand what 'entertainment' means﻿," another chimed in.

However, some agreed Maher is entitled to his own opinion.

"This is just opinion guys, since when we trip over people opinion. Stan Lee was good guy and I thank this time line that we had chance to experience his work," one social media user said.

"I love Stan Lee, I love Marvel comics and I love Bill Maher. People's anger over Bill's blog only proves Bill's point as it shows a lack of any intelligent response from Bill Maher's new haters. Although I enjoy comic books, Bill is right - it's not sophisticated literature," one man added.

Lee launched his comic book career at Timely Comics, which later turned into the famous Marvel Comics, as a teenager in 1939. During his career, Lee's name and co-creations "have appeared in over 2 billion comicbooks and in countless languages," Lee's media team revealed in on Instagram post in September.