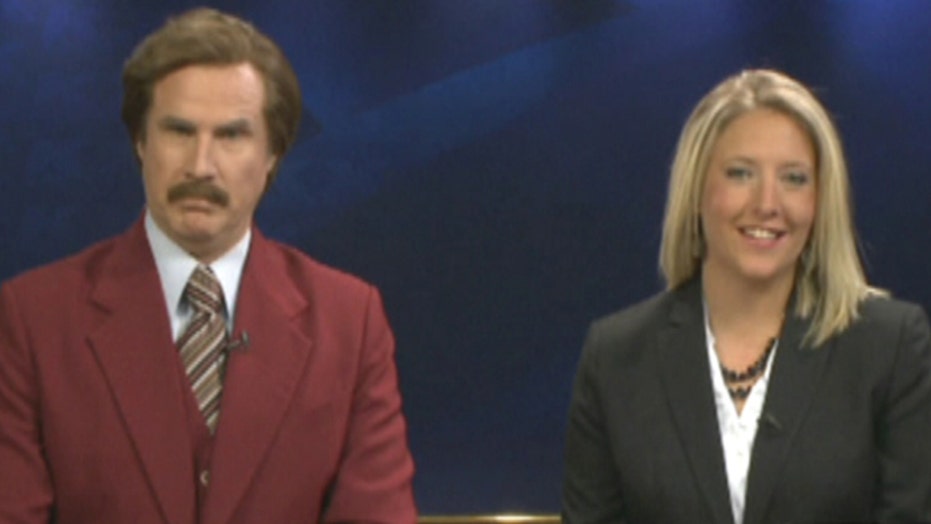 Television viewers in Bismarck, N.D., were treated to some real class this weekend when none other than the great Ron Burgundy read them the news.

Actor and comedian Will Ferrell reprised his "Anchorman" role for KXMB's Saturday night news broadcast. The former "Saturday Night Live" star is promoting "Anchorman 2: The Legend Continues," a sequel to the 2004 film about a fictional news team's sexist reaction to the arrival of an ambitious female reporter.

Dressed in his signature rust-colored three-piece suit and a striped tie, Ferrell read stories off the teleprompter, punctuated them with exaggerated eye blinks and engaged in witty banter with weekend anchor Amber Schatz and the rest of the Bismarck news team.

Schatz said she has watched the original "Anchorman" about 30 times, and the hardest part of co-anchoring the newscast with Ferrell was holding back laughter every time he spoke in character.

"The second he said, 'Good evening, I'm Ron Burgundy,' I lost it," Schatz said Sunday. "It was really hard not to laugh."

He also clowned around, popping into Schatz's screen while she read a story and telling her after a commercial break, "Amber, you look lovely tonight" before asking her if she was married.

When Schatz told him she wasn't married, Ferrell replied, "Well I am, so don't get any ideas."

The online video of the 30-minute newscast, which is making the rounds on social media, is part of a widespread marketing campaign for the movie sequel that has included Dodge Durango commercials, a new Ben & Jerry's ice cream flavor named "Scotchy Scotch Scotch," and Burgundy's own exhibit at the Newseum in Washington, D.C.

On Sunday, Ferrell headed to Winnipeg, where he was slated to help cover Canada's Olympic curling trials for broadcaster TSN.

Sales manager Tammy Blumhagen said Ferrell's agent contacted the station in May and asked if he could anchor or co-anchor a newscast as part of the promotion tour for "Anchorman 2." She's not sure why KXMB was selected.

"When they called us, we kind of jumped at the opportunity," she said.

No money changed hands, Blumhagen said, and both the movie and television station are garnering significant publicity from the numerous shares on Facebook and Twitter.

Station managers did want some assurances that the stunt wouldn't go too far, and Blumhagen said Ferrell was on board with maintaining the integrity of the newscast.

Schatz, who typically anchors the weekend newscasts alone, said she didn't learn that she'd share the dais until Wednesday. It was a complete surprise to viewers.

During Saturday evening's newscast, Ferrell occasionally strayed from the script.

While extolling the tale of firefighters extinguishing a trash fire in a Sam's Club parking lot, Ferrell seemed impressed that crews used 500 gallons of water and foam to put out the blaze: "I repeat, 500 gallons."

He also drew laughs from Schatz when he mispronounced s'mores as "sah-mores," overdramatized his tease of the "Dakota Storm Center," and noted after the sports segment, "I've never seen fighting in a hockey match before. That was fascinating."

Schatz, a 31-year-old North Dakota native who has worked in small markets for eight years, said the whole experience was surreal. If she could choose how to spend her 15 minutes of fame, "I would choose this exact thing."

The news team expected Ferrell to end with his "Stay classy" catchphrase, but he missed the cue, saying: "What? Am I supposed to read that?"

The crew got to hear him say "Stay classy, Bismarck," during the credits, but his microphone had already been cut off.