Amber Heard insisted in an interview that aired Tuesday that she stands by "every word" of her testimony – nearly two weeks after Johnny Depp won his defamation case against her.

A Virginia jury awarded Depp $10.35 million in damages, rejecting Heard's claims she was physically and sexually abused by him.

"Of course to my dying day I will stand by every word of my testimony," she told Savannah Guthrie on the "Today" show in her first interview since the verdict came down.

The jury also awarded Heard $2 million in her countersuit, finding that Depp had defamed her through his attorney.

The actress said the case was about "the freedom to speak truth to power."  Guthrie said whether she had been truthful was what was at issue at the trial, but Heard doubled down. "That's all I spoke, and I spoke it to power and I paid the price," Heard said.

The "Aquaman" actress blasted the public nature of the proceeding, which was live-streamed on countless networks. On Twitter and TikTok, Heard was relentlessly ridiculed.

"The vast majority of this trial was played out on social media," she said. "I think that this trial is an example of that gone haywire, that gone amok, and the jury is not immune to that…I think even for the most well-intentioned juror, it would have been impossible to avoid this."

She described passing hundreds of Depp fans on her way into the Fairfax County Courthouse, who were holding signs that said "burn the witch" and "death to Amber."

When it was her turn to testify, she stepped into the witness box and saw Depp supporters, she said.

"I saw a courtroom packed full of Captain Jack Sparrow fans who were vocal, energized," she told Guthrie. "This was the most humiliating and horrible thing I’ve ever been through. I’ve never felt more removed from my own humanity. I felt less than human."

Guthrie said many people were "disgusted" by the whole spectacle and had little sympathy for either side. "I would not blame the average person for looking at this and how it’s been covered and not think that it is Hollywood brats at their worst," she said. 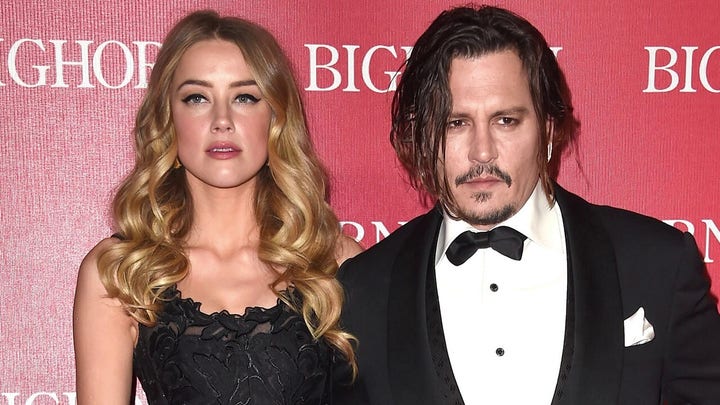 The journalist asked Heard to respond to an accusation from Depp's lawyer that her testimony was the performance of her lifetime.

"Says the lawyer for the man who convinced the world he had scissors for fingers," Heard scoffed, referring to Depp's role in "Edward Scissorhands."

ELON MUSK WEIGHS IN ON DEPP-HEARD TRIAL: 'I HOPE THEY BOTH MOVE ON'

Guthrie confronted Heard with audio recordings that were played at the trial in which she admitted instigating a physical fight with Depp and hitting him.

In another clip, she taunted him: "Tell the world, Johnny, tell them, 'Johnny Depp, I, a man, I'm a victim too of domestic violence,' and see how many people believe or side with you."

A photo combination of Amber Heard and Johnny Depp in court May 23, 2022. (AP Photo/Steve Helber, Pool)

Heard said these excerpts of much longer recordings don't accurately represent their relationship. She said that Depp lied when he testified he never hit her.

One of Depp's lawyers said part of the reason she lost was because she never took responsibility for anything she did in the marriage. Heard said this wasn't true.

"I behaved in horrible, almost unrecognizable to myself ways. I have so much regret," she told Guthrie. "I talked about the horrible language. I talked about being pushed to the extent where I didn’t even know the difference between right and wrong."

Heard is expected to discuss how she feels about Depp now in part 2 of her interview slated to air Wednesday morning. She called her marriage to Depp "ugly" but said it could also be "beautiful."