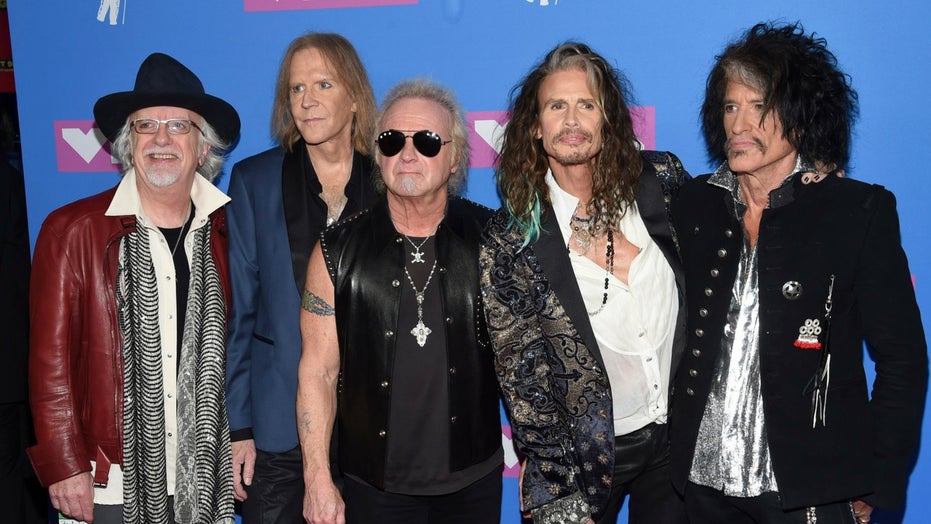 Aerosmith may be spending some extended time in Vegas these days, but don’t tell the band they’re playing it safe. Halfway through their new Vegas residency, “Aerosmith: Deuces Are Wild” (based on their 1994 single of the same name) the rockers say it’s been one of the most thrilling endeavors in their storied career thus far.

“This has been an incredible opportunity to play a smaller version of our regular show in an intimate seating [and] a way to present the heart and soul of the band’s essence with added elements you wouldn’t have ever been able to do in a one-night-only setting,” Joe Perry says. “It’s something very different than what we have ever done before.”

The new residency launched to solid reviews in April, with critics praising the “multi-sensory spectacular,” which sees the band perform 18 of their biggest hits. Long-known for their live shows, the band sought out the help of producer Steve Dixon (Britney Spears, Justin Timberlake) to adapt their touring set to the 5200-seat Park Theater inside the Park MGM Hotel. The next step was finding a way for the show to stand out amidst a crowded field of residencies in Sin City all competing for fan attention and tourist dollars. Indeed, Aerosmith shares the Park Theater with Lady Gaga and her “Enigma” residency, while artists like Janet Jackson, Christina Aguilera, Def Leppard and Diana Ross all currently have projects on the strip as well.

Dixon, who recently consulted for K-pop acts, Blackpink and BTS, on their European tours, says it was important to sell the band at its most authentic, namely, as an iconic live act. “Most Vegas shows focus on the visuals, and the general public has been accustomed to settling on ‘okay’ sound as a trade-off,” he says, “but the authenticity of a rock band and what these guys do is based on a journey of audio, whether it’s on a CD or streaming or through an amp where you blow your speakers out. You need to put on a spectacle but you have to be authentic,” he continues. “So with this show, you see Aerosmith like you’ve never seen then before, but you also hear them like they’ve never been heard before too.”

Dixon met with Steven Tyler and Perry back in 2017, and says they consulted with a number of audio brands before settling on three companies that would work together to create a unique concert experience for the fans.

Together with L-Acoustics, a French company known for their high-performance speakers, MIXhalo, the real-time audio platform founded by Incubus guitarist Michael Einziger, and the California-based headphones company, 1MORE, Aerosmith designed an on-stage VIP section for their residency, where fans sit (or stand) just a few feet away from the band. Adding to the experience, fans can plug in a dedicated pair of 1MORE Triple Driver in-ear headphones to access the concert audio direct from the sound engineer’s mixing board. Instead of hearing music blasted out of speakers (which, as Dixon explains, isn’t typically directed at people side-stage), fans connect their phones to a dedicated wireless channel created by MIXhalo and hear the same sound mix the band is receiving through their in-ear monitors. The MIXhalo channel takes the feed off the board with zero latency and tunes it in precisely through the comfortable portable earbuds.

Fans in the VIP section can switch between different audio mixes, choosing to either hear the mix like the rest of the theater, or hear what’s coming in through Tyler’s in-ear monitors. At the end of the night, they can take the Aerosmith-branded headphones home for themselves (similar models are available online).

“With this show,” Dixon explains, “we’re taking an experience typically reserved for audio technicians at the sound board, and giving it to the fans.”

Adding to the experience, the “Deuces Are Wild” show is the first-ever THX Live-certified event, meaning it meets the digital audio giant’s standards for accurate, clear reproduction of sound. The 1MORE Triple Driver headphones are also THX-certified, passing the company’s highest audio standards for precise, accurate sound. L-Acoustics, meantime, worked on the room design, using its “L-isa” technology to create a wall of soaring, multi-directional sound.

“The sound takes everything about this show to the next level, and it’s a 360 experience; full immersion,” Tyler says. “Nowhere else can fans hear what I’m hearing and see what I’m seeing like they can at our show.”

In addition to the audio advancements, Perry says the band was inspired by “The Beatles LOVE by Cirque du Soleil” show, which plays just a few blocks down from the Park Theater at The Mirage. Aside from Dixon, who oversaw the entire “Deuces Are Wild” production, the band tapped Cirque du Soleil’s Giles Martin (a two-time Grammy winner and son of The Beatles’ producer, George Martin) to help with sound design.

“We found the best people we could for every aspect of the show,” says Perry, who notes it took about a year to put the entire show together. “Whether it was the lights, sound, mechanics, all the moving parts, we had the best people.”

After almost 50 years of touring, the band says it’s been a welcome change to stay in one place for a few months at a time. And while artists like Queen and Elton John have been the subjects of successful biopics in the past year or so, Aerosmith says the focus is still on the music — at least for now. Perry and fellow guitarist Brad Whitford confirmed in an interview earlier this year that the group wants to head back into the studio to record new material. Meantime, Tyler, who appeared as a judge on “American Idol” and released a solo country album in 2016, has sworn off solo commitments for the time being to focus on the residency, which returns to Vegas in September.

And while many of their contemporaries have since split or retired, drummer Joey Kramer says the secret to Aerosmith’s longevity is simple. “We all still really enjoying performing together,” he says, adding that the residency has helped them rediscover their “passion” to “play some of the songs we’ve played hundreds of times before.”

As for the band’s share of off-stage drama and well-documented battles with personal demons, Kramer adds, “Music is the ultimate antidepressant.”

As of now, the residency is slated to end in December (find tickets here), though the band says they’re open to extending their run.

“There’s really no reason for us to stop,” says Kramer. “Everybody is re-excited about this residency and re-ignited about doing it; it hasn’t gotten old yet.”

Adds Whitford: “When I look up at all the people when I am playing, and see all of our fans, all of the love, I think to myself, ‘Wow, thank you, each and every one of you for being here with us. This,” he says, “is the one thing Aerosmith can say we did right in this life.”