The Jaguar E-Pace has an Easter egg painted onto the bottom left corner of its windshield. It depicts a Jaguar with a cub. Cute.

It’s supposed to symbolize the model’s role as Jaguar’s baby SUV to the larger F-Pace. The only problem is, they’re different species.

Although the two look a lot alike -- and are gorgeous for SUVs as far as I and all of the heads they turn are concerned -- an X-ray examination reveals it’s all a façade.

But they do share a beating heart. Two of them, actually. They’re 2.0-liter four-cylinder engines, rated at 247 hp and 296 hp, and are the only ones offered in the E-Pace, while the F-Pace can also be had with a selection of supercharged V6 and V8 engines, not to mention a diesel.

But the more-powerful version does the trick in both of these urban jungle cats. It’s more than adequate and a good value proposition in the F-Pace, and turns the little E-Pace into something of a muscle machine. You’ll find it bundled in the R-Dynamic trim level, which starts at $47,395, a big jump up from the E-Pace’s starting price of $39,595.

But you get more than power. All USA-bound E-Paces have standard all-wheel-drive, and the R-Dynamic adds leather upholstery, automatic emergency brakes and built-in WiFi. Available options run the gamut from a 360-degree camera to adaptive cruise control and a full panoramic sunroof. Unfortunately, Apple CarPlay and Android Auto smartphone integration costs $300 for the pair, because they are necessities given Jaguar’s so-so native infotainment system. All-in, it’s not hard to tally up more than $60,000, which is a lot for a small SUV, but in line with Jaguar’s luxury competitors.

In keeping with its mixed lineage, the E-Pace features interior styling that borrows a fair amount of DNA from Jaguar’s F-Type sports car. Notably its pistol grip gear shifter and the grab handle on the center console for the front passenger, but also the overall vibe of the design and materials. It's not glitzy and glamorous, and there’s a bit too much bare plastic, but the look is sporty and unique.

On the functionality front, rear legroom is snug and the seatbacks don’t fold perfectly flat, which makes it hard to get the most out of the cargo space. But there’s plenty of it, despite the sloping hatchback.

As far as the ride is concerned, I have to tell you that my first few miles behind the wheel were a little disappointing, but only because I’d literally just stepped out of Jaguar’s new battery-powered I-Pace SUV. It’s about the same size as the E-Pace, but its seamless electric drive and supple air suspension system make its conventional cousin feel like it’s from the Stone Age. 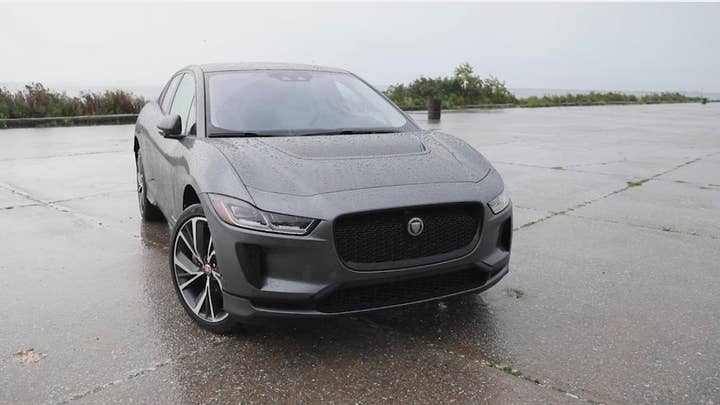 Once I reacclimated, however, the E-Pace revealed a solid blend of comfort, handling and response. It’s not the pure magic you get in pricier Jaguars, but even with the 20-inch wheels and thin tires that the top of the line R-Dynamic HSE rides on it’s never too rough, the steering is lively and the engine makes highway merges a breeze. And while you likely won’t see too many E-Paces intentionally going off the beaten path, those Range Rover bones give it some light off-road chops and the ability to wade through 20-inch-deep water. This is one kitten that’s not afraid to get wet.

All things considered, that Easter Egg is just as much about E-Pace customers as it is about the car, depicting Jaguar’s hope that newcomers who buy this entry-level model will grow with the brand. But that only works if their first experience is a good one.

It was for me.