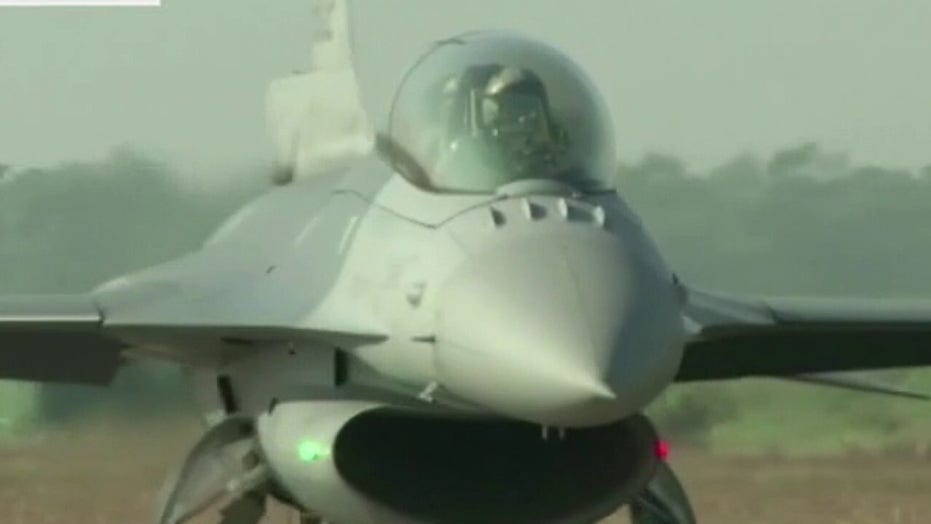 A stream of Chinese fighter jets sliced through Taiwan’s southwest airspace on Wednesday, according to the island’s defense ministry. It was the latest in a string of perceived threats by Beijing in recent weeks.

It comes as Taiwan and the United States appear to draw closer diplomatically – much to Beijing’s ire – and Taipei calls for even more international support amid deepening concerns it could at any moment become the “next Hong Kong.”

In June, the Chinese Communist Party (CCP) imposed a sweeping security law in the name of quashing dissent in Hong Kong – prompting activists and opposition politicians to flee or face arrest in a fast-moving erosion of freedoms that the financial enclave was supposed to uphold until at least 2047.

A demonstrator waves a flag during a rally to show support for Hong Kong pro-democracy protests at Free Square in Taipei on June 13, 2020. (Photo by Sam Yeh / AFP) (Photo by SAM YEH/AFP via Getty Images)

Hong Kong and Taiwan are widely viewed by Chinese nationalists as the two remaining strongholds of opposition to President Xi Jinping's rule, with the former having quickly fallen. As it stands, China does not allow its neighbor to obtain recognition on the international stage.

"Beijing cannot win the hearts and minds of the Taiwanese, the CCP has therefore chosen a punitive strategy – increased military coercion, efforts to isolate Taiwan internationally, and various attempts to undermine the effectiveness of Taiwan's democratic institutions, support for those institutions, and to erode state cohesion," Michael Cole, Taipei-based senior fellow with the Global Taiwan Institute in Washington, D.C., and the Macdonald-Laurier Institute in Ottawa, Canada, told Fox News. "Taiwan's very existence as a free, democratic society is a living condemnation of the CCP. Hong Kong was a stark reminder of that reality, and the Taiwanese were well aware of this."

Last month, Taiwan's foreign minister Joseph Wu cautioned in a meeting with visiting U.S. Health Secretary Alex Azar that fears of its freedoms being crushed by China were an ever-evolving cause for concern. And its provocative uptick in military activity – a symbolic hint to Taiwanese President Tsai Ing-wen over who is in charge and that any move toward official independence will be greeted with force – amid the distraction of the global pandemic has not gone without notice.

Yet many observers worry that the drills and campaign of intimidation are more than mere messaging – raising the risk of conflict, while at the same time investigating the autonomous island's readiness and defense capabilities.

As Chinese military actions grew in May, Taiwan responded by sending in marines the following month in an attempt to bolster the barracks that were previously only secured by the Coast Guard. Over the course of recent months, China has deployed both its air force and navy to conduct exercises on an almost daily basis near Taiwan's periphery, including a multitude of intentional forays into Taiwan's airspace.

The CCP is also said to be shoring up its offensive and intimidation tactics in cyberspace.

Liu Chia-zung, deputy director of the Taiwan Investigation Bureau's Cyber Security Office, announced in August that loopholes in the Taiwanese government's information service providers had been penetrated by two hacking groups – allegedly with the support of the CCP. Liu cautioned all government agencies to enhance reviews of their providers.

And while Xi, who came to power in 2012, initially tried to lure Taiwan in with lucrative economic incentives it refused to accept, he has since sought to fiscally chastise the island and send the message that patience may be wearing thin.

"The risks are that at some point, Beijing will run out of options and/or patience and conclude that it must 'resolve' the issue through the use of force," Cole asserted. "The CCP has cultivated a dangerous ultra-nationalism that makes an admission of failure, backing down or de-escalation nearly impossible. Facing a refusal by the Taiwanese to subject themselves to Chinese rule, the CCP thus faces a challenge to its narrative – and it resents that."

Dan Blumenthal, director of Asian Studies at the American Enterprise Institute (AEI) and author of the forthcoming book, "The China Nightmare: The Grand Ambitions of a Decaying State," noted that Taiwan and Hong Kong are essentially different – Taiwan being a de facto independent democratic country rather than a "special autonomous zone" – which means that the Chinese would "have to use military force to bring Taiwan to heel."

Yet despite the spike in forces coming from all fronts, Taipei is continuing to push back.

Last week, its government announced plans to issue new passports, underscoring its sovereign identity – a move bound to infuriate Beijing. The documents minimize the "Republic of China" wording and emphasize "Taiwan" in large capital letters on the cover.

Taiwan officials have also moved forward this month with a plan to stop local sales of Chinese streaming services, including iQiyi and Tencent's WeTV, in a bid to shutter regulatory loopholes. Moreover, it has given e-commerce site Taobao Taiwan – owned by China's conglomerate Alibaba – six months to re-register as "Chinese-backed" after a commission detailed concerns over information security data being routed back to Beijing.

Additionally, ever since the novel coronavirus emanated from the Chinese city of Wuhan last year and spread to almost every corner of the planet, Taiwan has seized the moment to remind the international community that its early warnings about the virus and a CCP coverup went ignored by the World Health Organization (WHO).

A May survey by research institute Academia Sinica concluded that just 23 percent of Taiwan residents deemed China as a "friend of Taiwan" – a sharp decline from the 38 percent figure a year earlier.

Adding to Beijing's dismay is the flourishing relationship between Taipei and Washington. In addition to the visit to the island of 24 million by Azar – the highest-level U.S. official to formally step foot there in over 40 years – State Department Assistant Secretary David Stilwell said on Aug. 31 that the U.S. would establish a new bilateral economic accord with Taiwan, with a focus on technology, health care and energy.

In this Tuesday, March 10, 2020, photo released by China's Xinhua News Agency, Chinese President Xi Jinping talks by video with patients and medical workers at the Huoshenshan Hospital in Wuhan in central China's Hubei Province. Top Chinese officials secretly determined they were likely facing a pandemic from a novel coronavirus in mid-January, ordering preparations even as they downplayed it in public. Internal documents obtained by the AP show that because warnings were muffled inside China, it took a confirmed case in Thailand to jolt Beijing into recognizing the possible pandemic before them. (Xie Huanchi/Xinhua via AP)

The Trump administration has also signaled the go-ahead for more weapons, including F-16 fighter jets, to be sold to the island. Although Washington does not have official relations with Taipei, it remains its largest supplier of arms and has steadily tightened ties over the course of 2020.

"Taiwan is at the very tip of the spear in the fight against Chinese aggression, so it makes complete sense that they would align with the United States on trade, supply chain security and cybersecurity," said Eric Noonan, CEO of CyberSheath, a Reston, Va.-based cybersecurity company. "With China victimizing the United States and executing the largest I.P. theft in history, and Taiwan recently disclosing attacks targeting at least 10 government agencies and email accounts of 6,000 officials, the U.S. and Taiwan have a common enemy in cyberspace and tremendous opportunities to share threat information to better defend against Chinese attacks."

At the end of the Second World War in 1945, Japan handed Taiwan back to China. In 1949, the government and the army of the Republic of China, led by President Chiang Kai-shek, retreated to the island to escape Mao Zedong's People's Liberation Army as it and his communist philosophy swept across the mainland in the Chinese civil war.

Blumenthal also pointed out that Taiwan has long been outspoken against the People's Republic of China's "coercion and malign influence," but it is only this year, because of COVID-19, that the global community is paying more attention.

"The U.S. is moving in the right direction by more publicly engaging with Taiwan and supporting it. But it needs to bolster its deterrence against a PRC use of force," he said. "On Taiwan, the U.S. should engage the CCP in private diplomacy to outline the political and military costs it would face if it uses force against Taiwan. It should be told that there is no surer way to Taiwan de jure independence than CCP aggression."

Taiwan has drawn increased scrutiny from Beijing since the Hong Kong security constriction three months ago. While island authorities have not created a concrete asylum path for those fleeing persecution, informally aiding Hong Kong migrants as Taiwan is doing – and the liaising over Chinese influence and aggression – sets the stage of further blowback, analysts warn.

"In the case of Hong Kong, there was always a limit to what could be done. Once it reverted, Hong Kong was part of China, and therefore beyond the reach of outside countries. That is not the case for Taiwan," added Dean Cheng, national security and foreign policy expert at The Heritage Foundation. "But for the same reason, support for Taiwan must be tempered by the realization that China is likely to be willing to use force, if it deems it necessary, to retake the island."