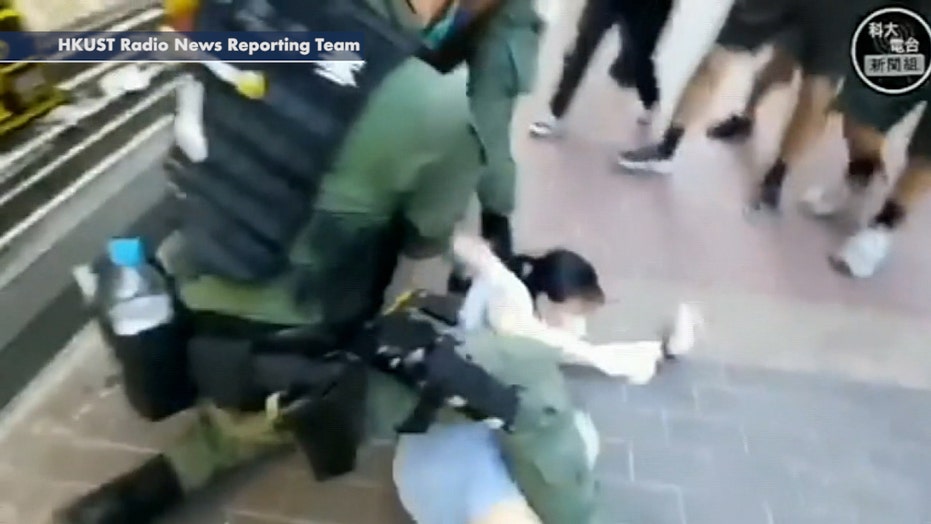 Raw video: 12-year-old girl tackled to ground by police in Hong Kong while she was reportedly shopping for school supplies with her family and got caught behind police cordon with protesters who were demonstrating on the date when Legislative Council elections were to take place.

Hong Kong police have come under fire following footage that went viral of officers tackling a 12-year-old girl out buying art supplies during a pro-democracy protest.

The officers, wearing green camo suits and thick, black, bulletproof vests, have not been swayed by the outpouring of disgust at the scene. Instead, they have blamed the pre-teen, claiming she took part in an illegal gathering and that she "ran away in a suspicious manner"

People sitting on the ground are arrested by police officers at a downtown street in Hong Kong Sunday, Sept. 6, 2020. (AP Photo/Vincent Yu)

The video, shared widely across social media and on various platforms in Hong Kong, showed the officers trying to herd a group of people, including the young girl, who tried to duck and run away. An officer tackled her to the ground while several others jumped in and helped pin her down.

The girl's family disputes the allegations and said she was out buying supplies with her 20-year-old brother and became scared when confronted by heavily armed police officers.

Police officers stand guard at a downtown street in Hong Kong Sunday, Sept. 6, 2020. About 30 people were arrested Sunday at protests against the government's decision to postpone elections for Hong Kong's legislature, police and a news report said. (AP Photo/Vincent Yu)

The girl, who is being identified only as "Pamela" to protect her identity, told i-Cable news, "The streets were cut off by police cordons so we had to double back to meet our family... but the police suddenly ran towards us. I was scared. They told us to stand still, but I panicked so I ran."

Her brother added he and his sister intended to contest the fine they had been issued for breaching social distancing rules.

"We were just walking by, so there was no reason for the police to come after us," he said.

Claudia Mo, a pro-democracy legislator, said the actions that were taken against Pamela show "how unnecessarily jumpy [and] trigger-happy Hong Kong police have become," The Guardian reported.

A man is arrested by police officers at a downtown street in Hong Kong Sunday, Sept. 6, 2020. (AP Photo/Vincent Yu)

Nearly 300 people were arrested at Sunday's demonstration. The protests followed the government's unpopular decision to postpone elections to Hong Kong's parliament by a year. The government blamed coronavirus for the delay but activists accused the government of manipulating concerns over COVID-19 to stop people from voting.

Protests have taken place every weekend since June 2019 after a proposed extradition law was announced, with protesters quickly adding demands for greater democracy and criticism of Beijing’s efforts to tighten control over Hong Kong.

And while protests have taken place on the weekends, the last one was the largest seen in Hong Kong since July 1, the first full day under the national security laws imposed by Beijing on Hong Kong. Those laws outlaw acts of sedition, secession, foreign collusion and terrorism.