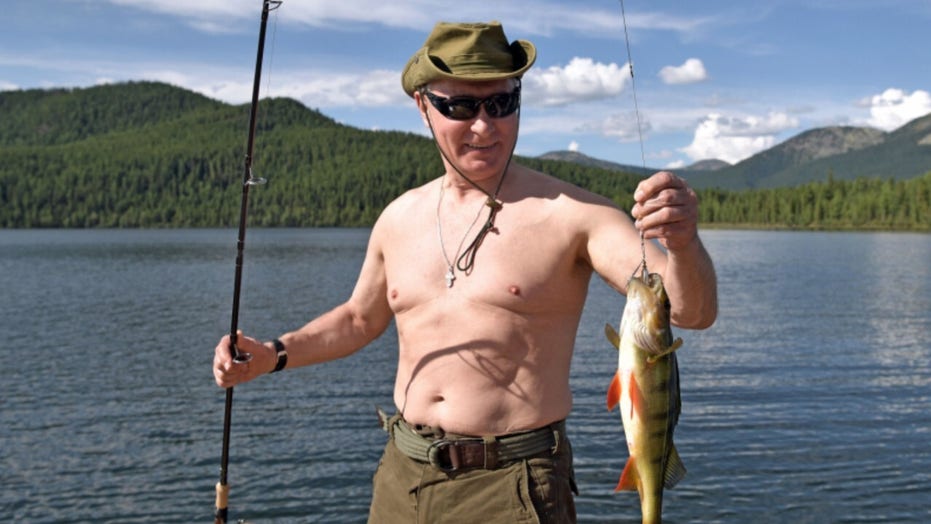 Russian President Vladimir Putin, through the lens of state media, is a man of many talents.

Whether Putin is taking off his shirt and reeling in fish in Siberia, or finding ancient treasures buried in the sea – the country’s media apparatus wants the world to think he is more than just a politician.

Here are some of Putin’s more unusual propaganda moments:

In March 2020, Putin visited a hospital on the outskirts of Moscow treating COVID-19 patients.

During his visit to the Kommunarka hospital, Putin praised its doctors for high professionalism, saying they were working “like clockwork.”

The Russian president then donned a yellow hazmat suit with a mask and went into a treatment area after meeting with the hospital's chief doctor.

Photographs from the tour show Putin standing out from the crowd, wearing the yellow suit as he strolled through the halls of the hospital.

Putin dives into the sea and finds ‘sunken treasure’

In August 2011, Putin pulled on a wetsuit and went scuba diving in the Black Sea at the site of a Greek ruin.

After descending to a depth of around 7 feet, the Russian strongman then spotted something apparently everyone else failed to notice for centuries – a pair of ancient, moss-covered vases sticking out of the sand, state media reported.

Russian Prime Minister Vladimir Putin carries artifacts he recovered whilst diving at an archaeological site off the Taman peninsular in southern Russia. (Reuters)

Instead of handling the supposed sixth-century artifacts with care, Putin, in footage of the dive, is then shown removing them from the seafloor with his bare hands.

When he got to shore to share his tale of discovery in the shallow seas, a throng of photographers just happened to be there.

"Treasure!" Putin told reporters with a big grin. "They drank it all already."

Hockey is a grueling, physical sport in which players body-check each other and often fight.

Yet, every time Vlad steps onto the rink in Russia, it turns into a no-contact game. Sometimes it becomes so laid back, he can sit on the bench and drink from a coffee cup.

Putin reportedly scored eight goals in one exhibition game in 2019, where he skated around defenders as if they were traffic cones and fired pucks past goalies who showed little effort in trying to make saves.

The only hard hit of that contest, it seems, happened after it ended. Putin, taking a victory lap around the arena in celebration of his near triple hat trick, accidentally skated over a red carpet and tumbled to the ground.

JONATHAN WACHTEL: IS VLADIMIR PUTIN MAKING MOVES TO BE RUSSIA'S 'PRESIDENT FOR LIFE'?

Putin takes off his shirt – again, and again…

In August 2017, a week after telling the U.S. to shed its embassy staff in Russia, Putin shed his shirt and braved the cold waters on a spearfishing vacation in southern Siberia's mountains.

Russia state media released images of Putin hooking fish – sans shirt – and lounging in a chair wearing sunglasses while working on his tan.

And it wasn’t the first time Putin took off his top in an attempt to advance his strongman image. In the summer of 2009, he famously was snapped riding a horse while partly in the buff.

North Korean dictator Kim Jong Un posed for similar photographs in October 2019, riding a horse through the snowy forests near Mount Paektu. Unlike Putin though, Kim was more modest – deciding to keep all his clothes on.

Who rode it better? Kim Jong Un channeled his inner Vladimir Putin with the equine photo shoot (KCNA via AP/Getty)

Russia’s Presidential Office gave the world a glimpse into Putin’s workout routine in 2015, when it released images of him trying to get jacked alongside former Prime Minister Dmitry Medvedev.

In a video, the pair were seen pumping iron at an outdoor gym tucked away inside a lush forest in Sochi.

However, instead of working out to music – Putin and Medvedev exercised in nearly complete silence. Putin also looked relaxed and didn’t appear to break a sweat on any of the machines he used.

The pair finished the photo op like most people do after their workouts: by grilling meat and sharing tea.