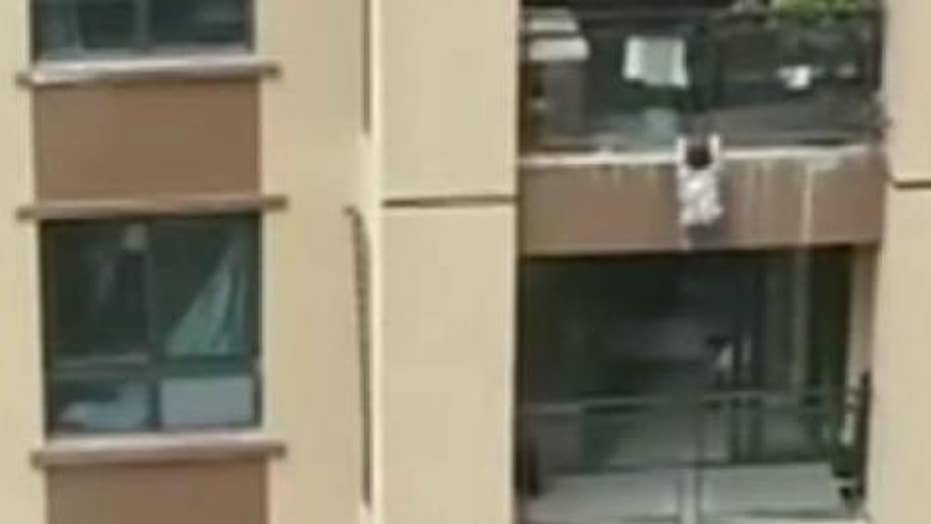 Child in China survives six-story fall landing in a blanket held by onlookers.

A three-year-old boy in China survived a fall from a sixth-floor apartment balcony on Monday thanks to a group of quick-thinking onlookers who used a blanket to break his fall.

The incident happened around 4 p.m. in a residential community in Chongqing, located in the southwest part of the country.

"I looked up and saw a little child was dangling up there. My first reaction was to find something to catch him," Zhu Yanhui, a staff member of the property management company, told CCTV. "I thought about rushing over there and catch him with my bare hands, but that would not have worked."

Video captured by onlookers showed the toddler clinging to the balcony edge as onlookers gathered under the building.

Onlookers then formed a circle with a white blanket underneath the toddler.

20-month-old child survives 60-foot plunge from apartment after landing on a car parked below, breaking his fall.

"I held out the blanket along with others all the while keeping my eyes on the child," Zhu Yanhui told CCTV. "I looked at the blanket wondering whether we could catch him safely. My only thought was to keep him safe."

The toddler can then be seen falling from the balcony towards the group waiting below and landing safely on the blanket.

"I was there at the moment and helped hold out the blanket. Ten seconds later, the boy fell," Zhou Xiaobo, staff of property management company, told CCTV. "It all happened so fast."

The three-year-old was transported to an area hospital, but sustained no injuries, according to CCTV. Police have said the boy was left alone in the apartment while his grandmother went grocery shopping.