Some inside Venezuela call her Lady Macbeth. Others say she’s really the most powerful person – not just woman – in their country, the 'puppet master' pulling the strings. She's Cilia Flores, disputed President Nicolas Maduro's wife.

Some inside Venezuela call her Lady Macbeth. Others say she’s really the most powerful person – not just woman – in their country, the "puppet master" pulling the strings. She’s a lawyer, political leader, television star and style icon in government circles, donning designer suits emblazoned with the country’s flag.

“She is a true believer in Hugo Chávez's Bolivarian Revolution and is known as the ‘Primera Combatiente Revolucionaria’ or ‘First Revolutionary Combatant.’”

Flores, who grew up in the small town of Tinquillo and was known as a “biker girl,” was first introduced to Maduro by the late President Hugo Chavez in the '90s. As a devout loyalist from the very start of Chavez’s revolutionary era, Flores served as a lead attorney for Chavez’s defense team and played a pivotal part in orchestrating his release from prison in 1994 after his unsuccessful coup attempt two years earlier.

WHY RUSSIA, CHINA ARE FIGHTING US PUSH AGAINST VENEZUELA'S MADURO

But it wasn’t until 2013 – more than 20 years later and after their respective divorces had gone through – that the powerful couple and esteemed members of the United Socialist Party of Venezuela tied the knot.

Their quiet ceremony came just two months after Chavez died and Maduro took the throne. Immediately, political insiders projected that Flores would be the country’s puppet master, the strong arm, and in Maduro’s own words “the first fighter of the fatherland.”

Venezuelan First Lady Cilia Flores. It wasn’t until 2013 – more than 20 years later and after their respective divorces had gone through – that the politically powerful couple and esteemed members of the United Socialist Party of Venezuela, tied-the-knot. (AP)

In 2012 the then-president appointed her as the attorney general for Venezuela. For six years before that, she served as the head of the National Assembly – the first female to ever hold the position.

But far from being a silent supporter in her First Lady position, Flores has since been widely accused of a multitude of misgivings. In September last year, the US Treasury Department imposed targeted sanctions on Flores for her alleged heralding of corruption, drug trafficking, and human rights abuses.

“President Maduro relies on his inner circle to maintain his grip on power, as his regime systematically plunders what remains of Venezuela’s wealth,” Secretary of the Treasury, Steven T. Mnuchin asserted at the time. “We continue to designate loyalists who enable Maduro to solidify his hold on the military and the government while the Venezuelan people suffer.”

Canada and Panama have also sanctioned the First Lady. 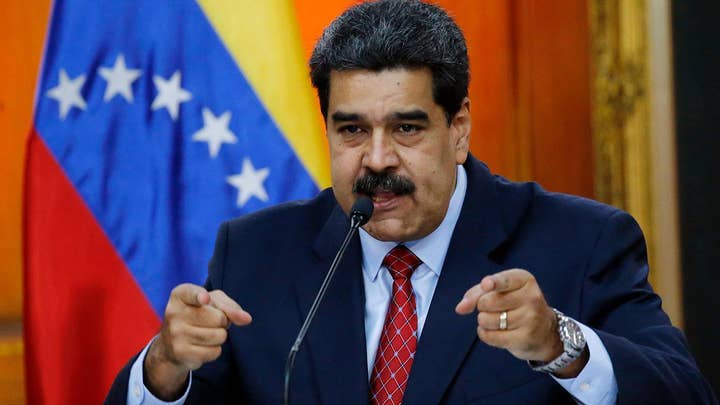 There have been scores of accusations that Flores and her family are in deep with the region’s drug trade. In 2015, her two nephews, Efrain Antonio Campo Flores and Francisco Flores de Freitas, were arrested by the U.S. Drug Enforcement Agency (DEA) in Haiti.

In a court filing, prosecutors said that they attempted to make $20 million in narcotics sales to “keep their family in power” and the men attested to having been raised by Flores and living in the Maduro abode.

They were subsequently charged with conspiring to import cocaine to the U,S. and stood trial in the U.S., where they were each sentenced in 2016 to 18 years behind bars.

Furthermore, Flores has come under fire in her home country for misconduct and nepotism – scheming and intimidating to ensure her friends and family received well-placed positions. She dismissed opposition press against her as nothing more than a smear campaign.

In mid-2017, Flores resigned from her position as the National Assembly Deputy to run for the ANC (Constituent National Assembly) – a new legislative body tasked with writing a new constitution for Venezuela, which much of the opposition and international community deemed to be a farce.

“Cilia is a very intelligent and ambitious woman, she has supported this political model since Day One,” said Caracas-based journalist and political activist, Noris Argotte. “In the pro-government media, she is portrayed as a fighter. Her haters, of course, are all of the opposition supporters; they see her as a woman who has taken advantage of her position to have luxuries.”

Since Maduro’s step into the presidency, the duo has purported to paint an image of domesticated bliss to cushion the dictatorship aesthetics – he calls her affectionate names in public, they are routinely seen holding hands, playing chess and socializing with arms entwined.

Venezuela's President Nicolas Maduro (L) and his wife and deputy of Venezuela's United Socialist Party (PSUV) pose for a photo during the recording of a government Christmas message in Caracas, Venezuela December 20, 2016.  (Miraflores Palace/Handout via REUTERS )

Flores even started hosting a TV show in which she interviewed and hung out with recipients of Venezuela’s government welfare, and claimed to be a follower of the late Indian spiritual guru and philanthropist, Sai Baba, who exhorted a message of anti-materialism and love.

And over the past week, since the crisis of Maduro’s presidency escalated amid massive street protests and the U.S. recognition of opposition leader Juan Guaido as the rightful leader, Flores – although seemingly a little less public than usual – hasn’t wavered in being by her husband’s side.

“Pray for me,” Maduro said during the inauguration of the Congress of the Christian Movement for Peace this week, flanked by Flores deep in worship. “I ask that you give me your blessings and I ask for peace and for the future of Venezuela. I ask for enough love to take the reins of the country towards a better destination.”

Since 2015, more than 3 million people have fled the ailing country as its economic crisis escalates into unprecedented levels – plagued by mass starvation, next to no medical supplies, and an ever-growing ascendance in violent crime.

And for many Venezuelans, the fervent desire to see Maduro usurped is equally applied to his wife. According to one former Venezuelan government researcher, Cilia is simply a “secretive, conniving and ruthless political operative” who “for all purposes, she is Maduro’s chief advisor in all political and legal matters.”

“There is no decision issued by the Supreme Court that she hasn’t reviewed and approved. She is good friends with Minister Varela (Iris Varela, the Jail Minister) and his brother is the Chief of the CICPC, Venezuela’s FBI. She also discovered Maikel Moreno, head of the Supreme Court,” added the insider. “Her enemies are mostly out of the government now. Her arch nemesis was former Prosecutor General Luisa Ortega… But in the end, she is Maduro's wife. She will fall on the same pit as Maduro.”