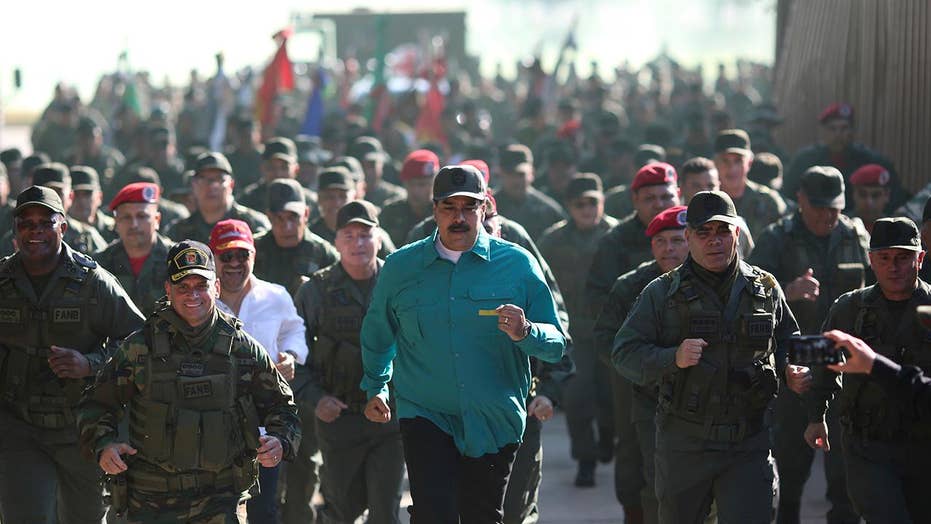 Maduro meets with troops in Venezuela, warns of possible invasion by US

The United States continues to squeeze and isolate the Venezuelan regime led by Nicolas Maduro with even more sanctions and support for opposition leader Juan Guaido. But more than a week after protests erupted through the streets of the embattled nation, Maduro remains steadfast – with the hand of Russia and China working in and out of the shadows, complicating U.S. efforts to foster change.

“It's a geopolitical chess game.”

But if it's a chess game, it's one that goes along with a massive and sobering military threat that's no game at all, with China and Russia standing to lose a lot if Maduro is replaced by a U.S.-backed government.

For starters, China has a satellite tracking facility at the Capitán Manuel Rios Air Base in Guárico, while Russia has a cyberpresence at the Naval Base Antonio Diaz "Bandi" in La Orchilla, an island north of Caracas.

“This adds space and cyberspace capabilities that the Maduro regime does not have,” Humire pointed out. “For Russia and China, pressuring the U.S. via Venezuela adds leverage to their regional ambitions in Ukraine and Eastern/Central Europe (for Russia) and Taiwan and South China Sea (for China).”

Furthermore, Venezuela owes a total of more than $120 billion just to China and Russia.  Both Beijing and Moscow are, according to geopolitical experts, worried that if Maduro falls, their already-strained budgets will take a major hit.

Russia’s tight relationship with Venezuela dates back to the reign of Hugo Chavez, and in the ensuing years, Venezuela has been one of the few in the international community to back Russia’s involvement in Syria and Ukraine. But most importantly, Russia’s state-run oil company Rosneft has an especially deep-rooted interest in Maduro’s government.

Two years ago, Rosneft took an almost 50 percent stake in the U.S-based oil company Citgo, which is owned by Venezuela’s energy conglomerate PDVSA. Citgo serves as collateral on Venezuela’s debts to Rosneft, and fundamentally gives Russia strategic sway in Latin America – a region where the U.S. once had significant weight.

“Both lose a strategic ally in South America, and both risk losing the ability to collect in full the debts owed by Venezuela,” cautioned William Ogborn, strategic communications and public diplomacy expert for numerous U.S. government entities including the House of Representatives and the Department of Defense.

FILE - Venezuelan lawmaker Juan Guaido takes the oath of office as president of the National Assembly in Caracas, Venezuela. A coalition of Latin American governments that joined the U.S. in quickly recognizing Guaido as Venezuela’s interim president, and not Nicolas Maduro, came together during weeks of secret diplomacy. (AP Photo/Fernando Llano, File)

According to one U.S. intelligence and defense official, who was not authorized to speak on the record, the threat of “asymmetric warfare” looms large as the Venezuelan crisis deepens – especially given Russia’s supply of arms and equipment to its Venezuela ally.

“Some clients of Russia got antiquated planes, Venezuela got state-of-the-art. There is a lot of candy that can be given away to cartels and terrorists, or used to flood others adverse to the U.S., such as Nicaragua,” said the U.S-based intelligence source. “At a minimum, they could harass the United States, if not cause a lot more trouble. This makes the Cuban Missile Crisis look like child’s play.”

For its part, China has injected some $65 billion into Venezuela since 2008, virtually all of it loans, secured by parallel contracts repaid in oil, in which it effectively controls the pumping of the fuel used to repay its own loans.

“In addition, China helped Venezuela to set up factories for manufacturing cars (Chery), telephones (Huawei and ZTE), the building of railroads, port upgrades and other infrastructure, and sold the regime millions of Haier appliances during the 2012 election to help the regime buy off supporters,” said Evan Ellis, a Latin America research professor with the U.S Army War College Strategic Studies Institute.

China has also sold significant quantities of military equipment to Venezuela, including the VN-4 armored personnel carriers and other vehicles used by the National Guard to repress protesters in 2014, 2017 and now.

These things, “as well as air defense radars, K-8 fighters, military transport aircraft, self-propelled mortar launchers and rocket launcher vehicles and an array of other equipment,” Ellis said. “China's role in selling arms has ramped up in recent years as Venezuela ran out of cash to buy Russian equipment, and Venezuela, especially the Marine Infantry and National Guard, bought Chinese military equipment on credit.”

Venezuela's Colombian neighbors, Ellis said, also understand that if the Maduro regime wished to distract from its collapse by trying to rally the country around an international conflict, Venezuelan Su-30 planes – if pilots are available – could strike targets deep in Colombia, and Venezuelan Russian armor could penetrate into Colombia's La Guajira region before running out of gas.

Yet the weaker Venezuelan becomes, the greater the potential Russian or Chinese hand in the region.

“Maduro still sits on the largest proven oil reserves in the world. That’s the grand prize. China could say that the more Venezuela becomes a pariah, the cheaper they want it,” noted the intelligence insider. “And the more leverage Russia then has to build a bigger base in the Western Hemisphere, and closer to the United States nonetheless.”

While the geopolitical power games go on, for the Venezuelan people – most of whom have advocated for a change in leadership – the clock for change is ticking. More than three million have fled the country – once awash in oil money and prosperity – since socialist economic policies caused the economy to crumble in 2015. With dizzying levels of hyperinflation, Venezuela has since been gripped by a worsening humanitarian crisis marked by massive food and medical shortages.

“Just like with Bashar al-Assad, Maduro was already dependent on Putin,” said Brett Bruen, director of global engagement at the White House, referring to Syrian leader Assad and Russian President Vladimir Putin. “Now he will become an indentured servant, forced to bend to Moscow’s will and cede more access to the Kremlin’s military and intelligence ambitions. Because of prior American sanctions and policies, Venezuela had already pivoted their military purchases to Moscow.  Their air, naval, and land forces are heavily supplied by Russian arms dealers.”

Along with unwavering support so far from Russia and China, the regime is propped up by Turkey, Cuba, and Iran.

“In the complex and demanding circumstances as the Venezuela crisis evolves, it is imperative for the U.S to stay the course in its support for the Guaido government, continuing to coordinate with the rest of the international community not only to advance diplomatic support for that government,” Ellis added. “But also for its control over assets abroad that rightfully belong to the Venezuelan people.”