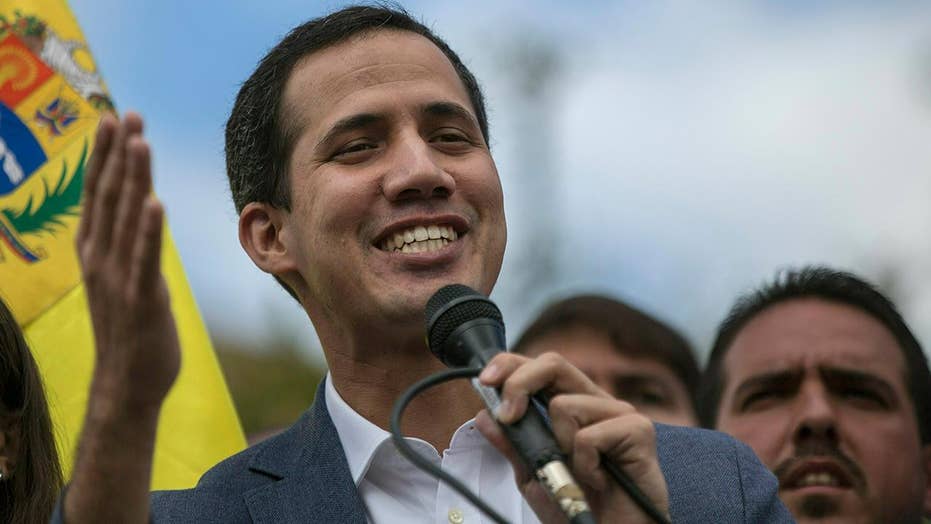 Venezuela's Supreme Court Tuesday agreed to a prosecutor's request to prevent opposition leader Juan Guaido from leaving the country while the Socialist government conducts a criminal probe into his activities.

Guaido said outside the National Assembly building that he was aware of personal risks, but added, "Venezuela is set on change, and the world is clearly conscious of what's happening."

"I don't underestimate the threat of persecution at the moment," he added, "but here we are."

National Security Adviser John Bolton denounced the probe by Saab, whom Bolton called "the illegitimate former Venezuelan Attorney General," and warned, "there will be serious consequences for those who attempt to subvert democracy and harm Guaido."

Earlier Tuesday, U.S. Secretary of State Mike Pompeo certified that Guaido had authority to take control of bank accounts that Venezuela's government has in the Federal Reserve Bank of New York or any other U.S.-insured banks.

Pompeo said the certification would "help Venezuela's legitimate government safeguard those assets for the benefit of the Venezuelan people."

Guaido has been recognized as the nation's rightful leader by two dozen nations that contend Maduro's re-election last year was a sham, in part because his strongest opponents were barred from running.

He moved forward with building a transition government on Tuesday, naming nearly a dozen new diplomats to nations that have recognized him as interim president. 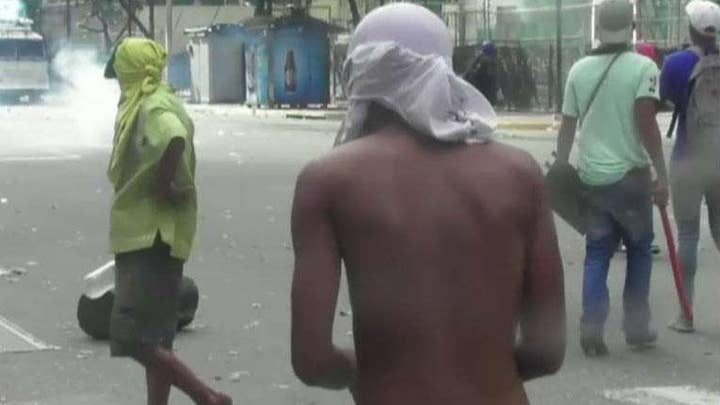 The United States, Brazil, Canada, Colombia, Argentina, Peru, Ecuador and Paraguay have officially acknowledged Guaido as the legitimate interim head of Venezuela, while countries including Russia and China backed Maduro.

Inside Venezuela, Maduro holds the reins of power with the armed forces still loyal despite an opposition push to lure their support by proposing amnesty for anybody who supports Guaido's transitional government.

On Tuesday, Maduro announced he would beef up the nation's defense by expanding Venezuela's civilian armed militia to 2 million members amid escalating tensions with the U.S.

The reserve force was created by the late Hugo Chavez to train civilians to assist the armed forces and defend the socialist revolution from attacks. Maduro made the announcement dressed in an olive cap and shirt before rows of troops before overseeing a military training exercise.

The embattled leader is accusing the United States of leading an open coup to oust him and exploit Venezuela's oil reserves, the largest in the world. On Monday, the U.S. hit Venezuela's state-owned oil company with sanctions aimed at increasing pressure on Maduro to leave office.

Michael O'Hanlon: Venezuela's future will be decided by Maduro and his army

"Once more we'll come out victorious," Maduro pledged. "We are on the right side of history."

The country faces a potentially devastating economic contraction as it stands to lose billions in export proceeds as a result of the sanctions over the next year.

Storchak said Venezuela owes Russia $3 billion, with repayments twice a year of around $100 million, with the next due in March. Russia also has extensive commercial interests in Venezuela, including state oil company Rosneft's partnership with Petroleos de Venezuela SA, which was placed under U.S. sanctions Monday.

Kremlin spokesman Dmitry Peskov said the Kremlin shared the view of the Venezuelan government that the sanctions were "illegal" and a tool of unfair competition on the part of the United States.

Opposition leaders have called for anti-government demonstrations this week.

The U.S. announcement raised its travel advisory to its highest level, putting Venezuela on a no-travel list that also includes Syria, Afghanistan, Iraq and South Sudan.