Since the failed 2016 coup attempt against Turkish President Tayyip Erdogan, more Americans are being imprisoned under what are widely believed to be trumped-up terror charges. Here are the stories of three of those Americans.

ANKARA, Turkey – The North Carolina pastor on trial in Turkey this week on what have been seen as questionable terrorism charges is hardly the only American citizen who has been arrested, jailed and harassed by an increasingly anti-U.S. Turkish government.

And while Andrew Brunson is at least getting his day in court -- along with the support of two members of Congress who are attending the trial -- the fate of other Americans being held in the Turkish legal system is much murkier.

NASA physicist and Houston resident Serkan Golge is one of those Americans. Convicted in a Turkish court on what were widely perceived as trumped-up charges, he was sentenced in February to seven and a half years in prison.

Golge’s nightmare began just weeks after the botched 2016 coup attempt in Turkey, while he was visiting relatives in Antaya, a city in the country's south, near the Syrian border.

According to Golge's wife, Kubra, the family were packing up a car with their two young sons -- now 2 and 7 -- and preparing for their trip back to Texas when plainclothes officers arrived and searched their luggage. Nothing was found.

Hours later, police returned to search the house where they had been staying. Again, nothing was found. But investigators appeared yet again, and located a single U.S. dollar bill -- one of the pieces of supposed evidence used to prop up claims that he had "terrorist ties."

Golge was charged with being a CIA operative and a supporter of Fethullah Gulen, the Pennsylvania-based Muslim cleric that the Turkish government of President Tayyip Erdogan blames for the coup attempt. The Turkish government has asked for Gulen's extradition, a request that has gone nowhere based on lack of evidence, according to U.S. officials. 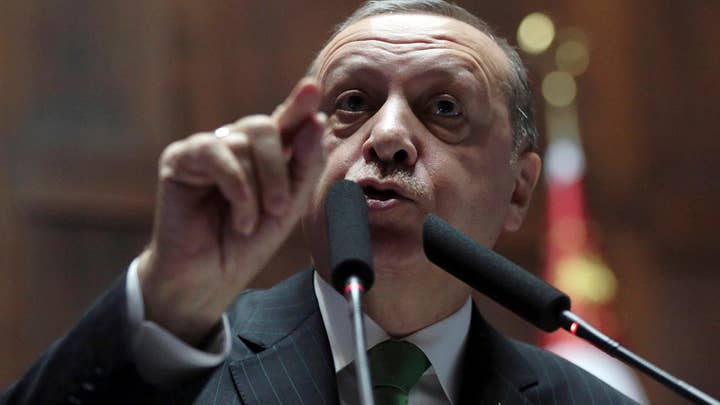 Associates close to Golge told Fox News that while he was under interrogation, authorities said he could “earn his freedom” by returning to the U.S and working as a spy for the Turkish intelligence agency, known as MIT. But he vehemently refused – and has since been singled out for harsh treatment that includes solitary confinement and "psychological torture," according to sources.

The prosecutor’s case apparently came courtesy of an in-law who made up the accusation due to a family disagreement over a piece of land that didn’t even directly involve Golge, sources said.  Golge’s mother and wife were not permitted to testify on his behalf.

Kubra is allowed to visit her husband once a week, and said he’s trying to stay optimistic. But he suffers from health issues, and was recently hospitalized for a kidney stone. Golge’s family was not notified that he was sick.

Kubra herself is under a “travel ban” and remains in Turkey, for reasons that have not been made clear to her. She has been forced to sell the family house in Houston to make ends meet.

And Golge faces an uncertain professional future, even if he were to be released from prison. His job, a research position in conjunction with NASA and the University of Houston, was eliminated after his conviction, “when it became
known … he would be detained long term,” according to a spokesperson for the school.

Those who studied and worked alongside Golge had nothing but glowing things to say.

“He is a very kind, genuine, and supportive colleague.  He wants everyone to have the best possible chance to succeed, and he will do his part to support even if all he can do is provide encouragement,” said Alicia Hofler, who studied alongside Golge as he was completing his doctoral dissertation at Old Dominion University in Virginia.

“When he moved to Texas to work as a NASA contractor, we kept in contact via email.  His emails always brightened my day.  He has a great sense of humor that is never spiteful or mean-spirited.  He always asked about my family and kept me up to date on his new life in Texas.”

Arne Freyberger, who served as Serkan’s co-adviser while he was completing his dissertation, told Fox News the thesis topic developed a new concept for the production of a positron beam. “Working with Serkan, watching him develop, grow and transition from a student into a self-sustaining scientist, is one of the highlights of my career,” said Freyberger. “Serkan was very appreciative of his good fortune in life.”

Freyberger said Golge would often reflect on his good fortune in coming from Turkey and embracing the American dream. “Selected and admitted into the ODU graduation program, obtaining U.S. citizenship, amazed that some of his concepts panned out, getting married and starting a family,” Freyberger said. “He never took anything for granted and never let what appeared to be an insurmountable obstacle stop him.”

Golge studied space radiation at NASA, with the goal of making it safer for astronauts at the space station -- a project cut short by his arrest. His colleague, Kevin Beard, called his contributions “world-class.”

Another Turkish-American citizen, 26-year-old Nilufer Sonmez, was just released from a Turkish jail in February, after almost a year behind bars. She and her brother, Teoman, were taken into custody in April 2017.

“Intelligence officials accused me of using a cryptoprogram that coup plotters were using to communicate,” she told Fox News from the Turkish capital of Ankara, where she remains “under probation” – unable to leave Turkey for the United States. But the real reason Sonmez and her brother we taken in, she said, “was to abuse our father.”

Sonmez’s father, Adm. Nejat Atilla Demirhan, was among the thousands of military officers swept up in the aftermath of the coup. He was arrested in part, Sonmez said, because he had spent so much time in the United States.

Demirhan was sent by the Turkish military to study in Northern California, where Sonmez was born. She spent much of her childhood in Turkey before the family were again relocated to Virginia in her teenage years.

Sonmez said she made it through her imprisonment with the help of visiting officials from the U.S. Embassy, who were able to get her medical treatment for a blood pressure problem.

“I was trying to be strong, but the lady from the embassy was so upset for me she was crying,” Sonmez recalled. “She kept asking what she could do to help.”

But with their father now serving a life sentence, and as they try to piece their lives together, Sonmez – who married 18 months before her arrest -- said her new-found freedom is fraught. Even a night out with her friends and passage through a checkpoint on the way home -- in which all their identification cards are scanned by police --induces a sensation of panic.

“You just don’t know who will end up behind bars next,” she said, mustering a defiant smile.