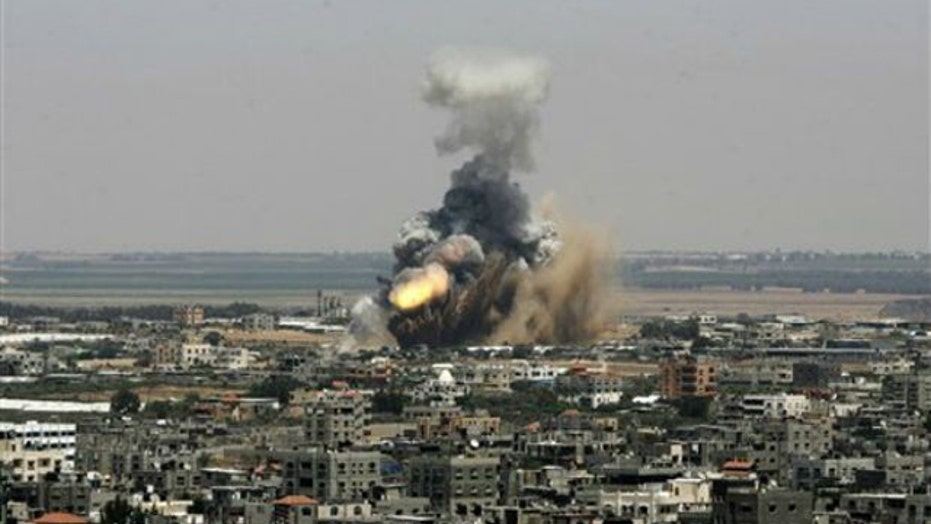 While Secretary of State John Kerry continues to pursue a cease-fire in Gaza—and Hamas rockets continue to rain down on Israel--the United Nations is looking over a proposal from Palestinian Authority chief Mahmoud Abbas—now known formally at the U.N. as President of the State of Palestine—to draw the world organization in as its full protector.

A letter laying out the Abbas request to put not only Gaza but also the West Bank “under an international protection system by the United Nations” was sent to Secretary General Ban Ki-moon two weeks ago, and formally presented by Ban to the Security Council on Monday.

The document is evidently intended as a further stage in the Palestinian diplomatic offensive to wrap itself as much as possible in the U.N.’s blue-and-white flag to further isolate Israel and advance Palestinian recognition, as well as bring an end to the current ground offensive aimed at wiping out Hamas rocket and tunnel infrastructure.

But paradoxically enough, its fuzzy wording also seems to undercut the notion being put forward by Palestine’s interim government—which includes Hamas—in as many U.N. venues as possible that Palestine is already a sovereign state with defined borders deserving of full international recognition.

That status according to U.N. Security Council resolutions is not supposed to be decided except through direct peace negotiations.

A U.N. spokesman told Fox News that beyond acknowledging receipt of the Abbas communication, “we should not have any other response to provide while his letter is being studied.”

“This is simply a thinly veiled attempt to ask the UN to intervene against Israel,” notes John Bolton, a former U.S. Ambassador to the U.N. and a Fox News contributor.

“The Palestinian Authority can hardly contend on one hand that it is a sovereign state, and on the other that it should be made, in effect, a U.N. Trusteeship.

Nonetheless, the idea of using the U.N. against Israel, despite logic or over-arching U.N. resolutions, is hardly a new idea, and it has recently born additional fruit.

Two days after the Abbas letter was formally passed on to the Security Council, the 47-nation U.N. human rights council in Geneva launched an investigation of alleged violations of international laws involved in the Israeli offensive.

The council’s executive director, Navi Pillay, said that the intervention had taken place “in a manner that could amount to war crimes," without mention of the triggering Hamas bombardment. Only the U.S. voted against the council action.

That action came despite an earlier Palestinian promise to avoid doing any such thing. A U.N. spokesman confirmed to Fox News this week that “Palestine has followed the procedures and has now acceded to the conventions.”

This further bolstered Palestine’s strategy of two years ago, when the General Assembly voted to accord the Palestinian Authority new status as a “non-member observer state.” The U.S., Canada, the Czech Republic and a handful of tiny island states voted against.

Ever since, the U.N. has referred in its communications from figures like Abbas to the State of Palestine.

That, in turn, followed a vote by the U.N. Educational, Scientific and Cultrual Organization, UNESCO, to admit Palestine as a member with full state status in late 2011—which led to a cutoff of U.S. funding to that organization under laws that prohibit such recognition absent the mandated peace negotiations.

A number of experts have argued that acceptance of Palestine’s membership by the U.N. organizations that support those treaties gives the Palestinians the same status as other member states—and should trigger the same sanctions where that support is funded from the U.N. regular budget (where the U.S. pays 22 percent of the total).

But “the State Department evidently does not agree with that,” notes Brett Schaefer, a U.N. expert at the conservative Heritage Foundation, who has advocated the cutoff. Indeed, State has quietly been trying to reintroduce UNESCO funding into its budget despite the Congressionally mandated restriction.

Like Bolton, Schaefer notes the glaring contradiction between the Palestian effort to be granted sovereign status without going through peace negotiations, and the latest effort to be placed under some form of U.N. protection—an idea he thinks the U.S. should firmly reject.

“This almost an implicit admission by the Palestinian Authority that they are incapable of governing themselves,” he says, especially after the injection of Hamas into Palestinian government.

But that is by no means the only paradox, he notes.

Hamas decided to launch a campaign of indiscriminate rocket attacks against civilians, despite having just joined the Hague governing the laws of war (which prohibit such attacks), U.N. treaties respecting the rights of children and other non-combattants, the convention on the prevention and punishment of genocide, not to mention the Geneva conventions which give primacy to the peaceful resolution of conflicts.

What the “treaty bodies” supporting those conventions think of their new member’s behavior is not yet known.

George Russell is editor-at-large of Fox News and can be found on Twitter:@GeorgeRussell or on Facebook.com/George Russell