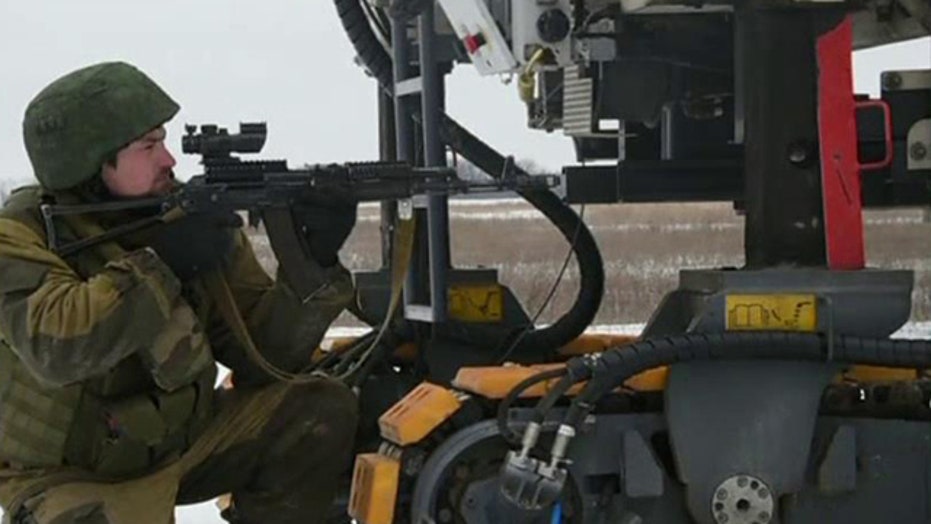 Under a peace agreement reached Feb. 12, both sides are to withdraw their heavy weapons 25 to 16 to 44 miles back to create a buffer zon e. Ukrainian officials said Sunday they were planning to start.

However, military spokesman Lt. Col. Anatoliy Stelmakh told reporters the moves will not begin until rebel attacks entirely stop, in line with a cease-fire that was supposed to begin Feb. 15.

Stelmakh said there were two rebel artillery attacks overnight and although this is significantly fewer than in previous days, "as long as firing on Ukrainian military positions continues, it's not possible to talk about a pullback."

Col. Valentyn Fedichev, deputy commander of the military operation against the rebels, said there had been 27 attacks against Ukrainian forces over the past 24 hours, which he said was lower than in recent days. He also indicated that no pullback was imminent.

"If the enemies continue to use their own heavy weapons, it is clear that Ukraine will continue to counteract these operations," he said.

The Organization for Security and Cooperation in Europe's observer mission in Ukraine is supposed to be monitoring the weapons withdrawal. Its spokesman, Michael Bocuirkiw, told the AP on Monday the monitors had seen heavy weapons movements by both sides but could not tell whether weapons were being pulled back or just being redeployed.

An Associated Press reporter on Monday saw Ukrainian forces moving back from around the town of Debaltseve, from rebel forces captured last week after a fierce weekslong siege.

Both Stelmakh and Fedichev said rebels are still trying to overrun a Ukrainian government position in the village of Shyrokyne, on the outskirts of the strategic port city of Mariupol.

Rebels began moving toward Mariupol last August, raising concerns they were seeking to seize the city in order to establish a land corridor between mainland Russia and the Russia-annexed Crimean peninsula.

Russia has denied arming the rebels, a denial scoffed at by Western nations and NATO, who point to satellite pictures of Russian weapons in Ukraine.