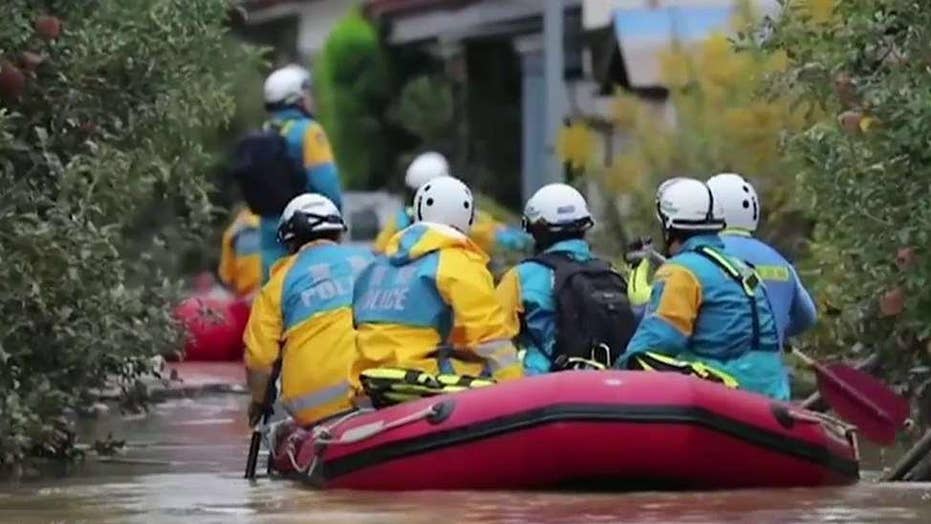 The historic rainfall from Typhoon Hagibis that spawned widespread devastating flooding over the weekend in Japan caused several bags that had decontaminated waste from the Fukushima nuclear disaster to be swept into a river, according to officials.

Hagibis hit Japan on Saturday with historic rainfall that caused rivers to overflow and left thousands of homes flooded, damaged or without power. More than 200 rivers overflowed, and more than 50 of those now have damaged embankments.

The Tamura City government told the Asahi Shimbun newspaper the bags filled with grass, leaves, and wood debris collected during decontamination efforts were being stored temporarily at the site. Workers discovered around 9:20 p.m. on Saturday that a number of bags had been swept into the Furumichi River after the facility was flooded by the typhoon's heavy rains.

A total of 2,667 bags were stored at the containment site, which did not have any sheets placed over them for protection from the heavy wind and rain from the storm, according to the newspaper.

Plastic bags containing greenery collected during decontamination efforts after the 2011 Japanese nuclear disaster were washed down a river during Typhoon Hagibis. (REUTERS/Toru Hana)

While six bags were retrieved, officials cautioned that some may have gone downstream. A photo obtained by Asahi Shimbun showed some of the bags washed into the nearby river.

The country's Ministry of the Environment told the Kyodo News agency there was no change in the measurement results of radiation in the temporary storage area or downstream of the river.

The agency added that “the concentration of radioactive materials is relatively low and has little impact on the environment."

Japan's government said Wednesday that the death toll for the typhoon has climbed to 63, with another 11 presumed dead. Chief Cabinet Secretary Yoshihide Suga told reporters that another eight people were missing in typhoon-hit areas in central and northern Japan.

At least 200 people were injured, 30 of them seriously, according to Suga. There are still 12,000 homes without power and more than 116,000 households without fresh water.

Suga said the government will spend $6.5 million from special reserves in the budget to cover food and other necessities primarily for evacuees. The full extent of damage from the typhoon is still unknown, and the government is open to further spending, if necessary, Suga said.

Rescue work in hard-hit areas in Nagano and Fukushima is gradually shifting to cleanup as receding floodwaters revealed more damage.