As horrid accounts of Jamal Khashoggi’s death inside Istanbul’s Saudi Arabia consulate continue to unfold, Turkey’s top brass – led by President Recep Tayyip Erdogan – has received praise from around the globe for its strong stance in investigating the silencing of a member of the media.

However, critics too are speaking out with a stark reminder that Turkey jails more journalists than any other nation and remains dismally low on the World Press Freedom Index.

Last December, the Committee to Protect Journalists called Turkey “the world’s worst jailer” of journalists for the second year in a row, highlighting that more than 150 have been imprisoned in the aftermath of the failed 2016 coup against the Erdogan government. Scores have been accused or convicted of terrorism-related offenses as a result of articles written or merely shared on social media – with many receiving life sentences. More than 180 media outlets have subsequently been shuttered, and around 2,500 journalists and others in the media industry have been fired.

Reporters Without Borders characterized Turkey's actions against journalists as a “witch hunt.” At a November 2017 Helsinki Commission hearing, Deputy Assistant Secretary of State for Europe and Eurasian Affairs Jonathan Cohen testified that Turkey’s extended state of emergency post-coup “appears to have been used expansively to target many Turks with no connection to the coup attempt.”

Of all the jailed journalists on the globe, an estimated one third have been put behind bars in Turkey. On the World Press Freedom Index, the NATO allied nation has fallen to 157 out of 180 countries. Saudi Arabia fared slightly worse on the press freedom scale, coming in at 169. 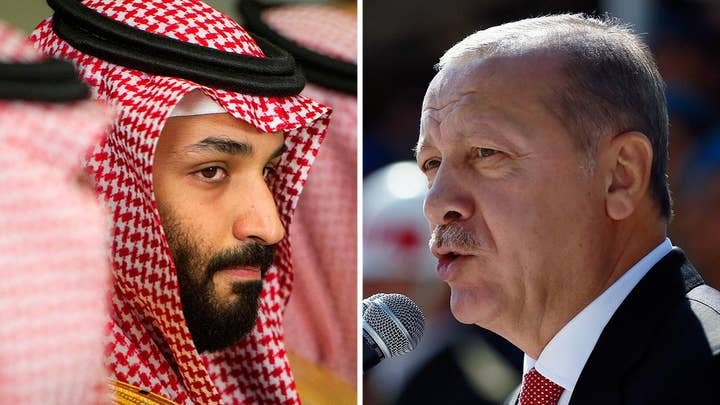 Turkey taking the lead as a defender of the media and human rights in the Khashoggi case “is absolutely hypocritical. But in geopolitics, states almost never give up the opportunity to benefit from the miscalculations of their rivals,” Kamran Bokhari, a specialist on the geopolitics of the Middle East with the University of Ottawa's Professional Development Institute, told Fox News. “Saudi Arabia is the last major Arab state standing, which can offer resistance to Turkey’s efforts to expand its influence in the Arab world. The Turks and the Saudis have been locked in a struggle for leadership over the Sunni Muslim majority Middle East.”

On an official level, Turkey and Saudi Arabia are working together in a “joint investigation” to determine what happened to Khashoggi, but the two nations are ultimately at odds in jostling for regional and geopolitical hegemony in the region. Moreover, they remain in conflict on a wealth of issues from Turkey’s strong bilateral relations with Qatar to Ankara’s ardent bulwark against the Saudi-supported Kurdish fighters in Syria.

Other critics have referred to the tragedy as an example of “two of the world’s biggest suppressors of freedom of expression” going head-to-head.

However, Ankara – in response to public outcry over its own record of jailed journalists – has staunchly maintained that it upholds a strong due process and rule of law. Those who garnered terrorism-related charges were most often accused of being connected to the Fethullah Gulen movement, which the government calls FETO. Gulen, who remains exiled in the U.S., has denied any involvement in the attempted overthrow.

According to Aykan Erdemir, a senior fellow at the Foundation for Defense of Democracies, Ankara’s criticism of Riyadh’s “shocking conduct” in the Khashoggi case is fully justified; however, Erdogan’s dismal track record of secret interrogations and silencing of dissidents significantly undermines Turkey’s credibility.

“So far, Erdogan has appeared less interested in fully uncovering the gruesome act, and more in putting pressure on Riyadh by drip feeding leaks to extract economic and diplomatic concessions,” Erdemir contended. “The instrumentalization of the Khashoggi crisis by Erdogan and his mouthpiece media to advance the Turkish president’s global political ambitions is a disservice to the memory of Khashoggi, a vocal promoter of freedom of expression.”

Turkish officials have remained firm that the death of Khashoggi, 59, a Washington Post columnist and outspoken critic of the Saudi government under Crown Prince Mohammed bin Salman, was at the behest of the highest levels of Riyadh leadership. Erdogan revealed Sunday that he would issue his own statement on the matter this week.

“The Turkish intelligence leaks are a tactic geared towards achieving the strategic goal of weakening the Saudis. The kingdom badly miscalculated when it decided to abduct/kill Khashoggi on Turkish soil, which provided the Turks with a rare opportunity to exploit. Given that the Turks have an interest in making the Saudis as bad as possible the information cannot be trusted,” Bokhari added.

Despite questions surrounding its own personal and press freedoms, Turkey has vowed that it will not allow a cover-up following Khashoggi’s death, which has rocked the international community and sent U.S.-Saudi relations into a tailspin. Turkey also cautioned that consequences could be “dire” for Saudi Arabia

“Turkey is playing a game of thrones. Erdogan is trying to elevate his own status, even while the economy is in freefall. But if he can isolate Saudi Arabia that is a win not just in foreign policy, but in domestic policy this plays very well,” noted James Carafano, a leading expert in national security and foreign policy at The Heritage Foundation. “But for the U.S., this is a challenge. The U.S. has strategic relations with both sides, so it needs to balance interests and values.”

In a Fox News interview Sunday, Saudi Foreign Minister Adel al-Jubeir described Khashoggi’s death as a “tremendous mistake” but ultimately maintained the government’s claims that Khashoggi had been killed in a “brawl” inside the consulate. Earlier, Saudi officials insisted he had left the consulate unharmed soon after entering on Oct 2. Nonetheless, Turkish officials have indicated that Saudi Arabia's version of events may be far from the end of the story. 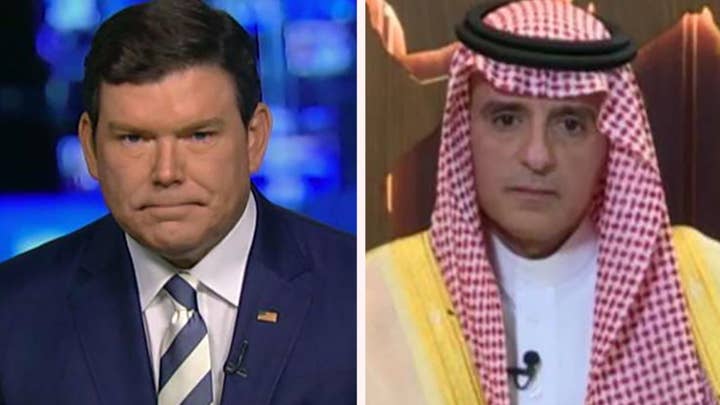 “Khashoggi’s legacy would be better served if it’s promoted by genuine advocates of media freedoms, and not confined to the bilateral spat between Ankara and Riyadh, given the problematic track record of both governments,” observed Erdemir.

Clyde Forsberg, who was one of the first Turkish-American citizens to be jailed in the immediate aftermath of the failed coup, also stressed the importance – especially during a time when press freedoms are at the forefront – of not forgetting the many journalists languishing behind bars under questionable circumstances.

“When I was in prison, my guards wanted reassurances that they were ‘good’ to me, unlike their American counterparts,” he claimed. “Because they hadn’t killed me, they seemed to think I owed them a debt of gratitude.”