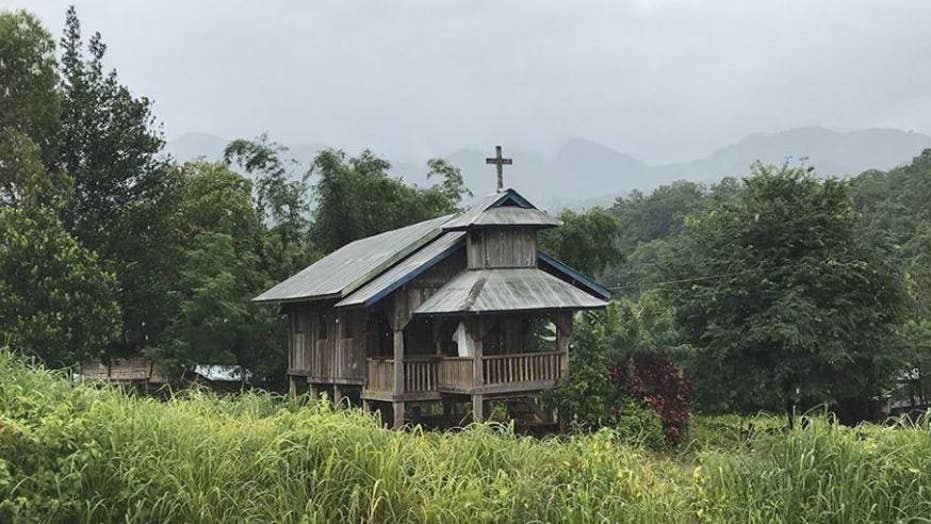 A look at how Christianity is under attack across Burma and how Christians are facing ethnic cleansing at the hands of the Burmese Army.

KAYIN, Burma – With the world’s attention fixed on the horribly violent persecution of Burma's Rohingya Muslims, Christians are also suffering from a less visible but also brutal mistreatment and ethnic cleansing campaign at the hands of the Burmese Army, according to aid agencies, human rights groups and U.S. officials.

The campaign against the Christians, which according to estimates has displaced at least 100,000 people, has also left thousands stranded in the Burmese jungle terrain, either from fleeing heavy bombing, or living in fear of what will come when the current monsoon season ends.

“Christianity is under direct attack by the Burma Army. Christians have repeatedly been singled out for rape, torture, and death over the course of this war, and that trend is continuing,” Ephraim Mattos, East Asia Operations Manager for The Nazarene Fund (TNF), a humanitarian group that works to support the plight of Christians worldwide, told Fox News. “In Burma, if you don’t fall into the category of being Buddhist and ethnic Burmese, then you are considered second-class, and not worthy of the full rights of a citizen.”

There is an unknown future for these Christian children in Burma. (Fox News/Hollie McKay)

Christians in Burma, also known as Myanmar, make up an estimated 8.2 percent of the Buddhist-dominant population - or around four million people. Many of those Christians live in the often undeveloped, neglected periphery states.

Christian groups backed the British against Japanese occupiers during World War II, and were once promised a homeland of their own. But they have instead encountered nearly seven decades of protracted war with the iron-fist Burmese military – suffering significant persecution ranging from rape, murder and forced conversions to labor conscription. They are also being forced to use their own bodies to enter landmine-peppered areas in “clearance” for Burmese troops, according to reports.

The Christians can only wait for what is likely to be an expanding campaign of ethnic and religious purging. The Burmese military operations are carried out like clockwork along the border provinces – moving from the western Rakhine state against the Rohingya up to the Christians and ethnic minority groups in the neighboring fringe state of Chin, around to the northern state of Kachin, down to the southeastern region of Shan, and then further south to the Karen – also called Kayin.

Concerns of "clockwork" targeting of minorities in border states (iStock)

“Today, religious and ethnic persecution continues to take place, both against the Rohingya, but also against Christian religious minorities,” affirmed Olivia Enos, policy analyst for the Asian Studies Center at The Heritage Foundation. “Christian Karen, Kachin and in Shan state have largely fallen off of the international community’s radar – but their plight is similarly severe. Kachin, for example, are being virtually collectivized – churches burned, land seized, women raped, and children killed before their very eyes. Not unlike what Rohingya experienced.”

In Kachin state, some 60 churches are reported to have been bulldozed by the Burmese Army in the last five months alone, replaced by Buddhist temples. The Kachin people, who have also endured a decades-long struggle for equal rights and self-determination, have faced an alarming uptick in violence since the start of this year.

Almost 7,000 villages of the Christian stronghold have been upended and just last week, a Burmese army-backed militia allegedly battered two youth pastors with rifle butts after they requested they stop decimating homes.

Then there are the ethnic Karens, whose leadership is mostly Christian, as are large swaths of the group's population.

Mattos said the recent increase in anti-Christian activity prompted the need for TNF to go beyond their fundamental rescue and relief efforts, and prepare the Karen people for “inevitable attacks that are coming.”

“We are creating an early warning communication network in the villages closest to the Burma Army outposts. This allows entire villages to evacuate before the Burma Army arrives, and to coordinate with other entire villages under attack to ensure fleeing civilians are not running in the wrong direction and into a trap,” Mattos explained. “The communications network also allows relief personnel the ability to respond in a timely manner to provide the villages with food, shelter, and safety.”

In early May, the Burmese Army marched in – under the auspices of re-building a strategic road that runs through the heart of Karen land – and heavy fighting subsequently broke out between the military and Karen fighters.

“Even though the Burma Army eventually pulled back their troops in preparation for the June rains, they told the Karen leaders that they will come back,” Mattos said. “It is not a matter of ‘if’ the Burma Army will attack the Karen, but rather ‘when.’ And many predict it will be this fall, when the rainy season ends.”

Christians are also tormented in more subtle ways. Saw Kwe Htoo Win, Vice Chairman of the Karen National Union (KNU), noted that even though they are constitutionally now allowed to teach their language and faith in the classroom, the central government brings in educators who are Buddhist, and speak only Burmese, meaning they have to scramble funds to try and keep their religion and ethnic tongue and tradition alive through church classes.

Moreover, District Chairman of the Hpa-an region of Karen state, Padho Aung Maw Aye, told Fox News he knows of cases where Christians in the community had applied to the central government for identification cards, only for the cards to be returned with “Buddhist” listed. After issuing complaints, the recipients were then dismissed and told “you can change it later.”

Nonetheless, Ta Doe Moo, Secretary-General of the KNU, said Christianity is steadily growing in Burma, despite what appears to be an apparent prohibition on private Christian services.

“Around the Yangon city area, we are receiving information that the government is not allowing Christians to hold services in their homes. They can go to church, but leaders have been issued orders not to have religious gatherings at home,” he said.

But bringing to life new churches, Moo said, is a problem because the government denied their requests to build or rebuild. He also said the discussion of faith has become more illuminated inside Burma, too, in recent years.

“It used to be when I was young that whether you were Muslim, Christian or Buddhist, it was never talked about and it didn’t matter,” Moo continued. “Now, that is very different.”

This Christian church survives, while others have been destroyed or replaced. (Fox News/Hollie McKay)

A U.S. State Department religious freedom report, released in late May, said the Burmese government is “doubling down” its campaign against ethnic minorities, and waging a new campaign of brutality against the Christian minority that has left more than 100,000 civilians displaced and trapped amid the hostilities. Late last year, the U.S again designated Burma a “Country of Particular Concern” (CPC) for violating religious freedom.

“The United States calls on all parties in Burma’s internal conflicts, including the military, to end violence and respect and protect the human rights of Burma’s diverse population,” a U.S. State Department spokesperson told Fox News. “We urge the Government of Burma to protect the religious freedom of all people in Burma.”

“Discrimination and violence against Christians and other religious and ethnic minorities in Burma has been ongoing in the country’s decades-long civil war between the military and several ethnic groups,” said the Vice Chair and Commissioner Gayle Manchin. “After witnessing the large-scale extermination of Rohingya Muslims, other religious and ethnic communities are right to be concerned that Burma’s military may do the same to them, especially since it operates with zero accountability and near total impunity.”

The Myanmar Embassy in Washington and the UN delegation in New York did not respond to multiple requests for an interview and comment on this story. But the government has officially and routinely insisted ceasefire agreements with ethnic minorities are holding, and has denied charges of religious or ethnic persecution.

According to Ta Doe Moo, Secretary-General of the Karen National Union, Christianity is steadily growing in the conflict-rattled Burma, despite what is leveled against them – which includes an apparent prohibition on private Christian services (Fox News/Hollie McKay)

Burmese officials have claimed they merely responded to Rohingya insurgent attacks on security forces last August, despite claims from State Department investigators that the clampdown was planned months in advance.

In contrast, Christians inside Burma worry that – with little attention from the international community in the dark shadow of the Rohingya tragedy – military rule will operate against them with impunity.

“Very few people are interested in our issue, we are struggling for the support of the people and it is becoming harder and harder to be a minority,” Moo added. “Without support, we cannot sustain in Burma. To the government and military, it is one language, one literacy, one religion.”